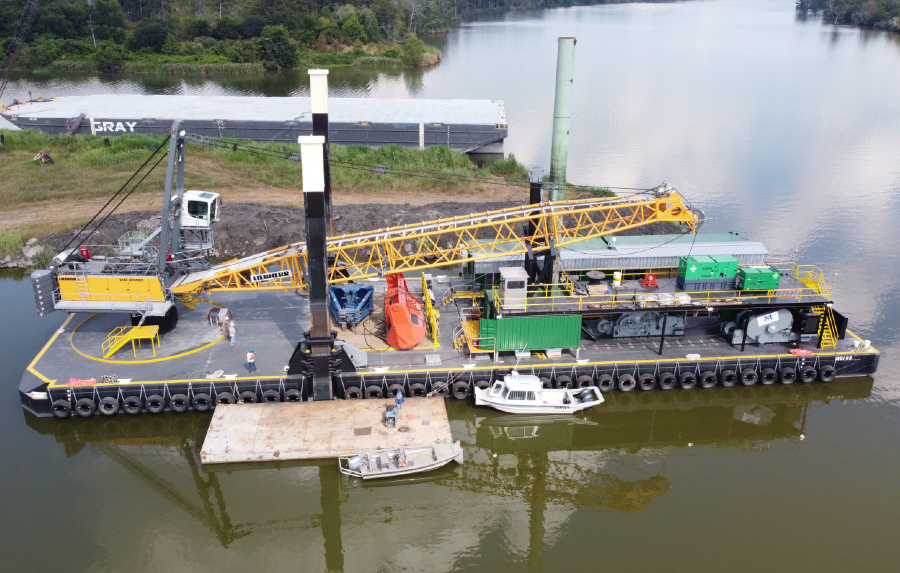 LAD Services of Morgan City, Louisiana, has handed over a new walking spud dredger barge to Matthews Brothers Dredging, a marine projects company based in the coastal city of Pass Christian in southern Mississippi.

Named MBI-08, the barge is the largest vessel in the current fleet of Matthews Brothers Dredging, which also performs marine salvage, reef building, debris removal, marine towing, and material handling, mainly for Gulf Coast clients in Mississippi, Texas, and Alabama. The barge was designed by Houston, Texas-based naval architects the Shearer Group (TSGI) in response to the owner’s requirement for a vessel that was capable of lifting up to 114,000 pounds (51 tonnes) of dredging spoil, an ideal attribute for heavy duty applications such as maintenance dredging works in port channels.

The new barge has a length of 200 feet (60.9 metres) and a beam of 60 feet (18.2 metres). It also features two tall removable spud legs that each measure 85 feet (25.9 metres) tall as well as one winch-operated walking spud leg of similar length.

The vessel is equipped with a 43,800-gallon (165,800-litre) fuel tank and two 24,400-gallon (92,364-litre) freshwater tanks. This translates into fewer and shorter downtimes for refueling and resupply when working on projects of extended duration.

The pedestal crane installed is a Liebherr HS 8300 HD crane with a boom that measures 125 feet (38 metres) long. The crane is of all-steel construction to guarantee durability. It is also designed to be fitted with either a mechanical dredging bucket with a 28-cubic-yard (21-cubic-metre) capacity or a hydraulic heavy digging clamshell grab with an 8.5-cubic-yard (6.4-cubic-metre) capacity, making it ideal for maintenance dredging on both soft and hard ground. The crane may also be used in coastal mining works.

Aboard the vessel, there is a full galley, a dining area, an office, bunks, a storage room, and a workshop, thus providing adequate accommodation and working spaces for the crew during prolonged operations. Even with its shallow draught, the dredger barge has been assigned an Oceans Loadline certification by the American Bureau of Shipping, which means it is also suitable for safe operations in deeper waters should the need arise.

Matthews Brothers has already put the new dredger barge to work since its delivery in the third quarter of 2020. It has since completed a number of large-scale dredging projects for various customers along the Gulf Coast such as the Port of Port Arthur and the Port of Houston in Texas and the US Army Corps of Engineers.