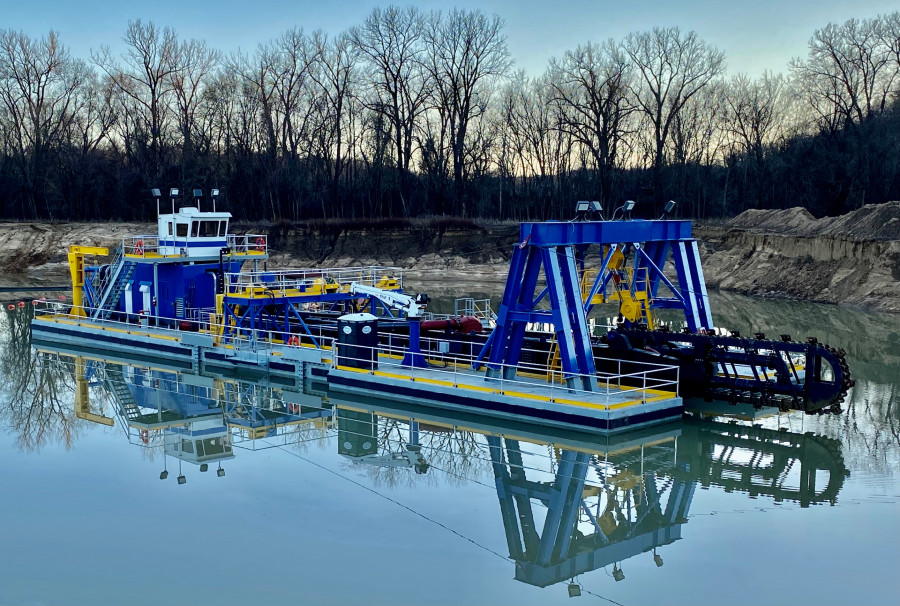 Winter Brothers Material Company, family-owned mining and gravel company that has been operating out of St. Louis, Missouri for over 75 years, has taken delivery of an electric-powered cutter suction aggregates dredger designed and built by Custom Dredge Works (CDW) of Topeka, Kansas.

CDW said the dredger was custom-built for the unique requirements of a recently launched aggregates mining operation by Winter Brothers on the west bank of the Meramec River in the town of Arnold 22 miles (35 kilometres) south of St. Louis, known for being an area rich in both sand and gravel.

The vessel utilises a chain ladder dredge head instead of a traditional cutter head. The chain ladder can effectively separate large rocks from any free flowing material to prevent these from clogging and cluttering up the suction mouth. This innovative cutting system will allow the dredger to mine effectively and efficiently even in the presence of large rock, cobble, and other debris indicative of aggregate deposits.

Since Winter Brothers has two older dredgers that utilise chain-ladder heads, its crews will have no trouble familiarising themselves with operating the latest addition to their company’s fleet. The suction mouth is positioned much closer to the material, which the dredger’s owner said can exponentially increase the amount of suction force and production output.

Lastly, the choice of a chain-ladder head was influenced by the fact that the material that the company regularly works with is free-flowing and therefore no longer needs to be broken up further. The chain ladder is simply for dealing with the small percentage of large rock – typically of the same size as basketballs – that also end up with the rest of the deposit. 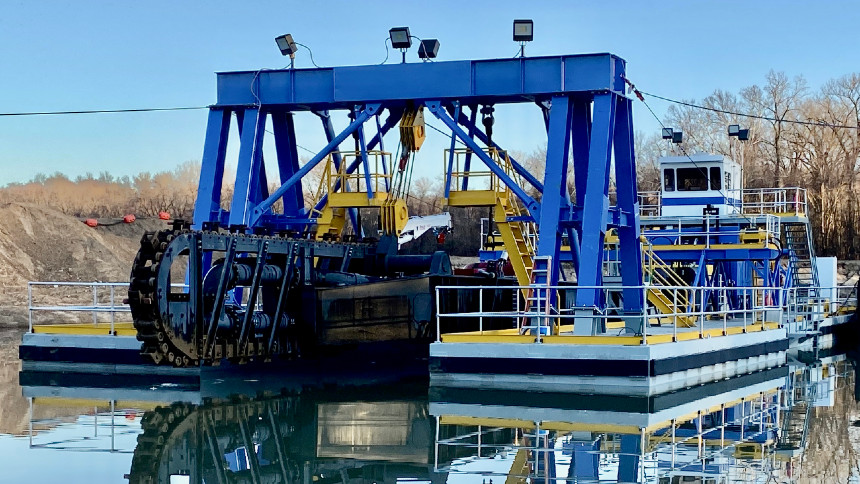 Winter Brothers mine supervisor Jerry Gunter said his company opted to invest in an electric-powered dredger due to the fact that it guaranteed low maintenance requirements and reduced downtimes compared to diesel-powered dredgers. Also, an electric dredger was preferred since it carried zero risk of oil and fuel spills in addition to generating only minimal noise, making this type of dredger suitable for aggregates mining work in environmentally-sensitive areas as well as areas near residential communities.

CDW has also claimed that, like other dredgers in its portfolio, the Winter Brothers electric dredger was built to ensure a service life of 40 years and with unscheduled shutdowns kept to a minimum with proper maintenance. Although fitted with automatic controls and displays that show parameters such as depth and pump speed, the vessel also includes the standard CDW features of redundant analog gauges and hydraulic controls to allow continued operation should the computer systems experience failure.

The operator’s cabin measures eight by 10 feet (2.4 by three metres) and has a mechanical swivel seat, 120V electrical outlets, and an air conditioner with heat strip. The dredger also has an air-conditioned motor control centre (MCC) that houses all onboard pump motors, starters, and circuit breakers.

There are also a three-ton (2.72-tonne) jib crane, a set of Pullmaster winches, and two fire extinguishers.

CDW added that a new epoxy technology that maintains colour and appearance better than coal tar and mastic epoxies was used on the hull surfaces. This two-part epoxy has also been claimed to cure faster, allowing for a much more uniform, harder, and more durable finish.