Written by Baird Maritime on October 25, 2017. Posted in Dredging and Land Reclamation. 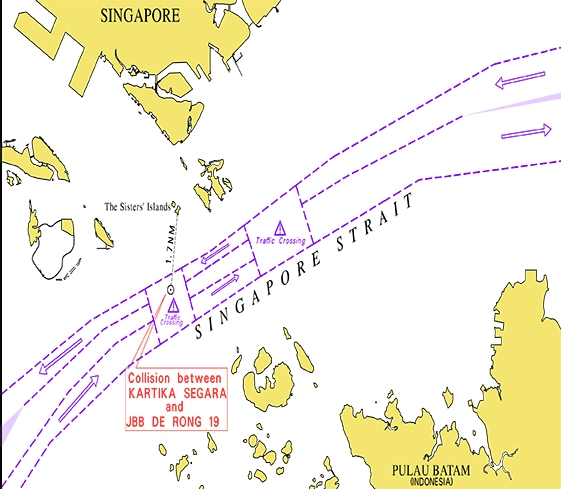 Two bodies found after a collision between the dredger JBB De Rong 19 and the tanker Kartika Segara in the early hours of September 13 have been identified as crew members from the dredger.

The Maritime and Port Authority of Singapore (MPA) said the first body was found south of Raffles Lighthouse in Singapore waters on September 16.

Family members of the crew member have since claimed the body.

A second body was found 1.9 nautical miles northwest of Tanjung Sengkuang in Indonesian waters, off Batam, on September 17. It is in the process of being claimed by family members.

Of the 12 crew members on JBB De Rong 19, seven were rescued. Four bodies, including the latest two, have been recovered and identified. The last crew member remains missing.

The MPA, which is investigating the collision, has previously said the incident took place in the westbound lane of the Traffic Separation Scheme (TSS) in the Singapore Strait.

“Prior to the collision, Singapore’s vessel traffic information system (VTIS) had provided timely navigational information and warnings to both vessels to take preventive actions to avoid a collision,” the MPA reported.

“While the vessels acknowledged the information provided by the Singapore VTIS, the collision was not averted.”