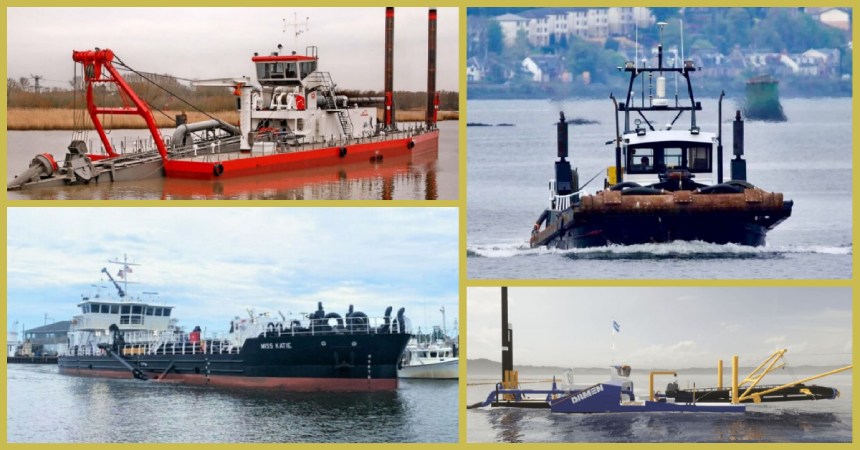 New maintenance dredgers have been delivered to operators in the UK and the US East Coast as a Dutch firm secures new contracts further east in Asia. Another Dutch company meanwhile introduces improved variants of an existing vessel range.

Miss Katie will be operated by EJE Dredging in North Carolina’s Outer Banks, a popular area for both commercial and recreational fishing.

The new dredger will perform maintenance work to help address issues related to shoaling in the area.

UK-based The Marine Group has begun operating a new harbour maintenance vessel that can be used either as a plough dredger or a water injection dredger.

Doonhamer has length of 14.6 metres and a displacement pf 55 tonnes. Full crew accommodations are also available.

The newbuild is the third dredger to join the Marine Group fleet as well as the largest.

The Damen Shipyards Group has unveiled a new range of cutter suction dredgers (CSDs) boasting improvements over similar vessels offered by the company.

All design elements and components of the new CSD range have been reviewed using the feedback from Damen’s customers. Among the new features are an advanced series of dredge pumps that will deliver increased production and discharge distance.

The latest CSDs have also been made as compact as possible so as to reduce transport costs. However, the advantage of the dredgers having a very large swing width is retained by maximising their length.

All the new CSD models are transportable by road, while the largest vessel is optimised for towage. Additionally, the CSDs retain ample space for maintenance to take place, both above and below deck.

Netherlands-based Royal IHC has been awarded a contract to provide design and engineering support for four new CSDs to be built in Bangladesh by local company Karnafuly Ship Builders for the Bangladesh Inland Water Transport Authority (BIWTA) upon completion.

Royal IHC will also provide technical support during the installation and commissioning of the dredgers and their respective equipment.

Royal IHC has also secured a contract to supply a new CSD to DACINCO Investment Construction Company of Vietnam. Delivery of the vessel is scheduled for early 2023.

The new CSD will be a near identical sister of DACINCO 07, which was delivered to the same customer in May of this year.