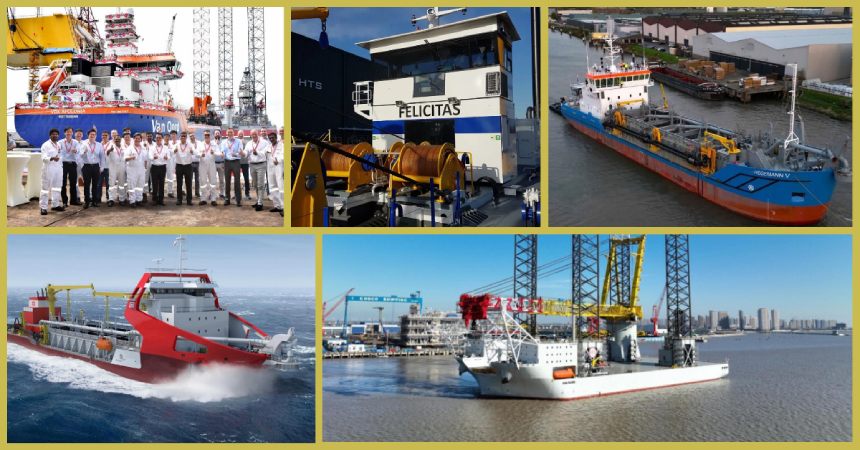 New dredgers and construction vessels are being delivered to customers in Europe and South America as one vessel for a German owner is nearing completion. An order has meanwhile been placed for a large-capacity newbuilding for operation in India.

The Jan De Nul Group has confirmed that its newest jackup installation vessel has departed China on its maiden voyage.

Voltaire will immediately work on its first installation project upon arrival in UK waters. It will be deployed at the Dogger Bank offshore wind farm.

Built by China’s COSCO Shipping, Voltaire has a crane capacity of 3,200 tonnes and a total lifting capacity of 16,000 tonnes.

Van Oord has taken delivery of the second trailing suction hopper dredger (TSHD) in a series ordered from Keppel Offshore and Marine of Singapore.

Like earlier sister Vox Ariane, Vox Apolonia has a hopper capacity of 10,500 cubic metres and is powered by a dual-fuel propulsion that is also configured to run on LNG. Van Oord designed the new TSHD series in-house in cooperation with Dutch naval architecture firm DEKC Maritime.

Vox Apolonia will now be prepared to sail to the Netherlands, where it will perform dredging trials. Its christening is scheduled for March 2023 in Rotterdam.

The Kooiman Marine Group of the Netherlands has begun conducting sea trials of a new trailing suction hopper dredger (TSHD) slated for the Hegemann Group of Germany.

Hegemann V is scheduled for delivery later this year. Once in service, it will be used for maintenance dredging in ports as well as inland and coastal waterways.

Named Felicitas, the dredger is a customised stock vessel tailored to the owner’s requirements.

The CSD is a dismountable dredger with a cutter power of 700 kW and a maximum dredging depth of 18 metres. The overall length exceeds 61 metres, resulting in a swing width of 63 metres and ensuring efficient operation due to the minimised time required for re-positioning.

The stationary dredger is equipped with a pump room separate from the engine room. The in-board dredge pump has a mixture capacity of 7,000 cubic metres per hour.

For Merco Vial, a number of options were added such as anchor booms, a deck crane, a navigation mast, and a production measurement system.

The Dredging Corporation of India (DCI) has awarded Cochin Shipyard of Kerala a contract for the construction of a new high-capacity trailing suction hopper dredger (TSHD).

The vessel will have a hopper capacity of 12,000 cubic metres. Design work will be provided by the IHC Dredging division of Netherlands-based Royal IHC, which will also supply the vessel’s dredging hardware package.

The TSHD will be used for the maintenance dredging of ports and inland waterways.