COLUMN | With dredging, beauty is in the eye of the beholder [The Boroscope]

Dredging is a strange business. Dredgers aren’t seen as things of beauty and all the action takes place underwater so there’s not much to see. On harbour beds throughout the world, dredging goes on without a murmur or comment, either for or against.

Doesn’t that strike you as odd? In this modern world where everyone has an opinion about everything? And if you haven’t got an opinion, by golly the press will quickly point out your shortcomings and get you opinionated about everything from climate change to Jennifer Anniston’s ongoing pregnancies.

Yet for all this talk, never a mention of dredging, even in the maritime trade journals. Dredging has never featured in a blockbuster movie, never been used as a secret weapon, or as a form of terrorism. Admittedly Jan De Nul’s dredger Pompei was once hijacked by Somali pirates (for a record ransom I might add) yet it didn’t even rate a movie re-enactment.

Dredgers don’t even have romantic names. Let’s face it, the public don’t see dredging as a sexy subject. Well, I’m about to set the record straight. Dredging is very far from mundane. It’s been around for hundreds of years. The Netherlands, as we know it, wouldn’t exist without dredging so it’s no surprise that the Dutch are very good at it.

The largest builder of dredgers in the world, Royal IHC, is based in the Netherlands, its spiritual home. Two of the world’s biggest dredging companies, Royal Boskalis and Van Oord are based there. Next door in Belgium are the other two big dredging companies, DEME (Dredging International) and Jan De Nul.

They all like being close so they can keep an eye on each other and when things get desperate, they’ll form a joint venture to crack a job. And sneaking in between them all is the Chinese giant, the China Harbour Engineering Company (CHEC). It’s a fair bet you’ve never even heard of CHEC.

Now dredging isn’t a business that you can start overnight. Some of these companies are themselves over a hundred years old and most began life as family businesses. The outlay on plant and maintenance is mind boggling. And even if you have the best and most modern dredgers in the world, you’re likely to find that a really good contract has popped up on the other side of the planet. Then, when that contract is finished, you’ve got all this equipment just sitting idle, a tough call on their financial reserves but then these companies seem to have very understanding banks. 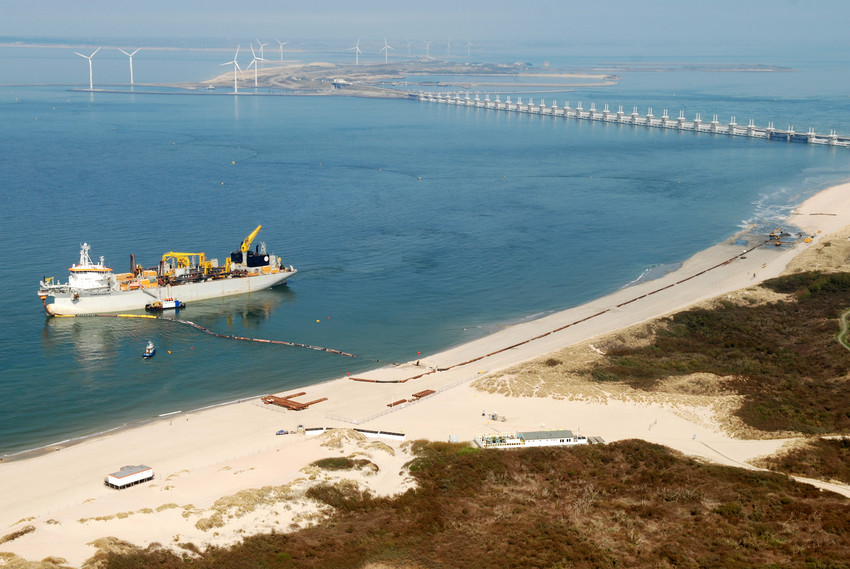 Over the years I’ve formed some wonderful friendships with dredging people. They all share the same values – they get the job done, whatever it is, without any fuss. On Chevron’s Gorgon project, Boskalis built a causeway and outer harbour from rock quarried 1,000 km to the south of Barrow Island – 400,000 tonnes of rock moved by truck from the quarry to a stockpile then by barge to Barrow Island, no problem.

Van Oord built that incredible Palm Island in Dubai. The UAE ruler had a fantastic vision of three palm shaped artificial islands off Dubai and Van Oord just built them for him, well only one so far. Hong Kong’s Kai Tak airport was getting over-stretched so Boskalis turned Chep Lap Kok island into a huge international airport, no problem, no fanfare, just got the job done.

My memories of dredgers go back a long way. On still nights in my early childhood I can still remember hearing the old bucket dredgers clanking and scraping away on the Newcastle harbour bed. Since that time, I’ve had this affinity for dredgers. Some have questioned my sanity over this penchant but there it is, my dark secret is out in the open. During my career I’ve had an on-going involvement with most of the dredging companies.

In the early days we were building dredgers at the State Dockyard. There was the big (for the day) cutter suction dredger, HAM211 (I did say the names weren’t romantic) which was later renamed the Kunara (an improvement, granted). Then I worked on the building of the trailer suction dredger, WH Resolution.

Both of these dredgers were part of the Australian dredging scene for more than 20 years, quietly grinding away at the seabeds of our harbours. They blasted great chunks of rock out of the Newcastle harbour bar to make it the biggest coal exporting port in the world. Indeed, there is now a class of bulk carrier called a Newcastlemax.

From the little bucket dredgers and grab dredgers of the 50s and 60s, today’s technology dwarfs them. The slow, tedious grab dredgers cleaning out silt from berth pockets years ago are now replaced with a dirty great backhoe fitted to a spudded barge that moves more silt in one grab than a whole hopper full of a grab dredger.

The Leonardo da Vinci (the dredger, not the sculptor) was for many years the biggest self-propelled cutter suction dredge in the world until along came Jan De Nul’s even bigger dredger, the De Nul (an original name or what?). This record will only stand for a short while until DEME’s new cutter suction dredger Spartacus comes into service. This LNG-powered 44,000kW brute will grab the title, but for how long? This dredge can cut rock down to 45 metres below the water level. Hard to conceive a cutter dredge working at this depth. 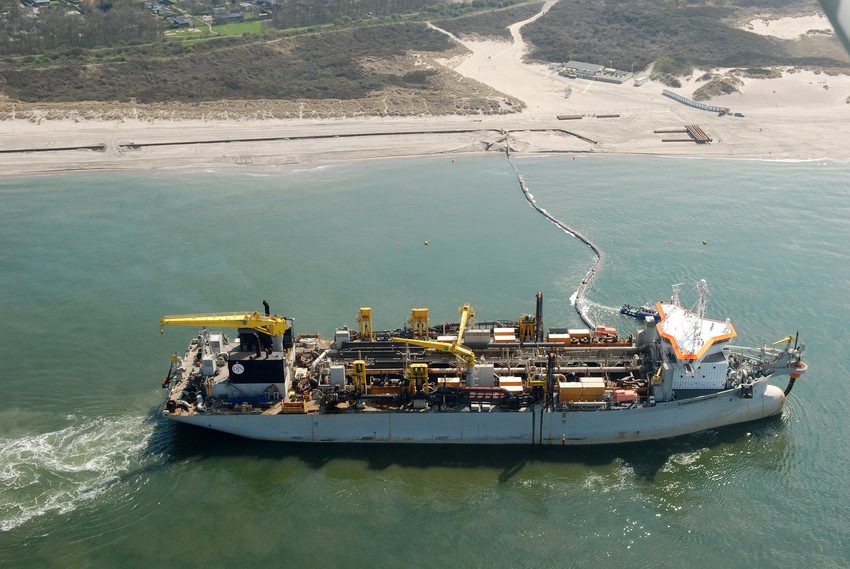 Dredging people are naturally stoic in their attitude to jobs, overcoming every obstacle placed in their way. Some years ago, Boskalis was reclaiming land for the Jurong petrochemical precinct in Singapore when it ran out of local sand. So, it started barging sand in from Vietnam, just pushing whole barge loads into the water to be reclaimed by the trailer suction dredges shaping the land around Jurong.

Now this sand contained quite a bit of unexploded ordinance – souvenirs of the Vietnam War. Some of the bombs were getting drawn up into the dredge pumps. This dangerous situation was quickly resolved by Boskalis. It simply posted warning signs on the pumproom entry doors: “Do not enter while dredging – hearing protection must be worn”. Problem solved.

And don’t say the Dutch don’t have a sense of humour. Amid howls of protests from environmentalists during the Port Phillip deepening project, a little fairy penguin got sucked up in the drag head of a trailer suction dredge. He went whizzing through the great Warman dredge pump and ended up happily swimming around in the hopper.

Rather than just quietly returning the little fellow back to the wild, the dredger boys proudly showed their prize to the boss. Then, the press got hold of the story and everything erupted out of control. The story was quite blown out of proportion in the opinion of the dredger guys. Certainly, something the little penguin could tell his grand-children about.

There are many stories like this one, often hilarious, some better left untold. But it’s an industry that holds an enormous fascination for me. If only the dredges had more romantic names they would truly be worthy of a blockbuster movie.