Written by Baird Maritime on May 26, 2020. Posted in Dredging and Land Reclamation, Uncategorized. 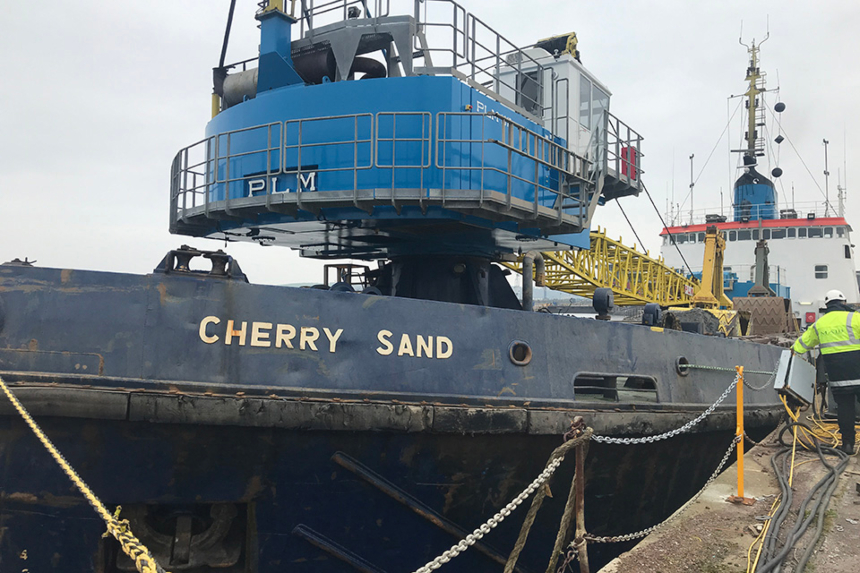 The UK Marine Accident Investigation Branch (MAIB) has published its investigation report into a marine accident wherein a dredger crewmember was killed after he had attempted to step ashore at the Port of Rosyth in Scotland.

On February 28, 2019, the master of the UK Dredging-owned dredger Cherry Sand was crushed between his vessel and the jetty after he fell while attempting to step ashore to assist berthing the vessel in Rosyth.

The master had climbed over Cherry Sand‘s bulwark and on to the rubbing band in readiness to step ashore as part of a self-mooring operation.

The chief officer was still manoeuvring the dredger towards the berth when the master took a single step towards the quayside. Cherry Sand was too far away from its berth, with the result that the master’s foot missed the quay, and his upper body struck the chains and quayside with force before he fell between the quay wall and the vessel.

The master was crushed by the moving dredger before slipping into the water.

The individual was wearing a lifejacket and the ship’s crew were able to recover him onto the quayside, but his injuries were too severe, and he could not be revived.

A recommendation has been made to the Maritime and Coastguard Agency to amend the Code of Safe Working Practices for Seafarers to provide guidance on mooring and unmooring operations, and when it is permissible for vessels to self-moor.

A recommendation has also been made to Associated British Ports (ABP) aimed at ensuring a common approach to safety and the application of company procedures across the UK Dredging fleet.