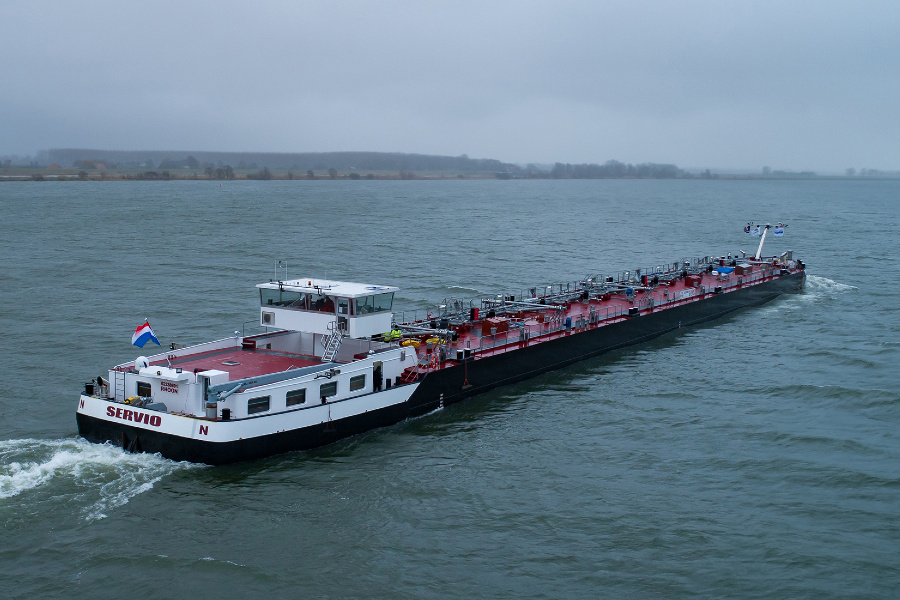 Servio is currently managed by Netherlands-based R.S. Shipping and chartered by Burando Barging, which specialises in the inland transport of petrol, mineral oils, chemicals, and other bulk liquids in the Antwerp-Rotterdam-Amsterdam region, Switzerland, and elsewhere throughout north western Europe.

The vessel has a length of 110 metres, a beam of 11.4 metres, and a draught of 3.82 metres. The hull was built by Shipyard Kladovo in Serbia, which also handled construction and installation of the superstructure – including a retractable wheelhouse to enable sailings under low bridges – and the cargo piping. The hull was later transported via the Danube River for fitting out at the facilities of Oonincx Scheepsonderhoud (OSO), a shipyard in the southern Dutch town of Werkendam.

The fitting out in OSO also included installation of the engines. The main engine is a Cummins QSK38M1 diesel that generates 1,040 kW at 1,800 rpm and turns a 1.75-metre propeller through a Masson Mw W5200 gearbox with 5.91:1 ratio to deliver a prop rotation of 302 rpm. The vessel can sail at a maximum speed of 12 knots and a cruising speed of 8.8 knots.

The assortment of auxiliary engines includes a Cummins X15 diesel that produces 428 kW at 1,800 rpm and is compliant with EU Stage IIIa emissions regulations. This engine supplies power for the bow thruster, the cargo pumping system, and generator sets from John Deere and JCB. The dual-use engine employs an in-house-built system with a double bearing Marathon generator.

All engines and generator sets were supplied and installed by Marine Power Drechtsteden while the bow thruster is a 397kW electric-powered pump jet from Verhaar Omega.

The cargo tanks have deep-well centrifugal pumps that are driven by motors mounted on the main deck. The pump machinery was supplied by DW Pumps while Hoveko installed the instrumentation used for tank ullage as well as tank alarms and pressure sensors. A set of 900kW boilers from Heatmaster have been installed as well.

Servio is also equipped with winches and other deck equipment from Van Wijk. Nelf coating optimised for inland sailings was used on the hull.

Although ballast water treatment systems are not required on vessels that sail on inland waterways, a ballast system with capacity for 1,000 tonnes was nonetheless fitted on the tanker to ensure an air draught of 4.5 metres. This feature, coupled with the vessel’s retractable wheelhouse, guarantees greater vertical clearance when passing underneath low bridges.

Servio was handed over to Larosare in January 2021 following sea trials conducted the previous month.