A new LNG bunkering barge has begun operating in the inland waters of Hunan province in southern China.

Built by Hunan Jinhang Shipbuilding in accordance to China Classification Society (CCS) rules, Xiang Neng Yuan Yi Hao (“Xiang Energy Number One”) is also the first vessel of its kind to be operated in Hunan province. Its area of operations will encompass the Xiangjiang River, Dongting Lake, and part of the Yangtze River. This combined area will eventually benefit from a significantly larger LNG bunkering and supply network – of which the new vessel will form a critical component – in line with a broader initiative aimed at reducing the emissions of marine transport along the Yangtze.

The non-self-propelled bunkering barge has an LOA of 65 metres, a beam of 12 metres, a design draught of 1.6 metres, and a total capacity of 200 cubic metres of LNG distributed among multiple type C cargo tanks. Separate cargo tanks with a total capacity of 395 cubic metres will be allocated for diesel, hence enabling the barge to also provide diesel bunkering for many of the conventionally-powered vessels that ply the waters of Hunan. 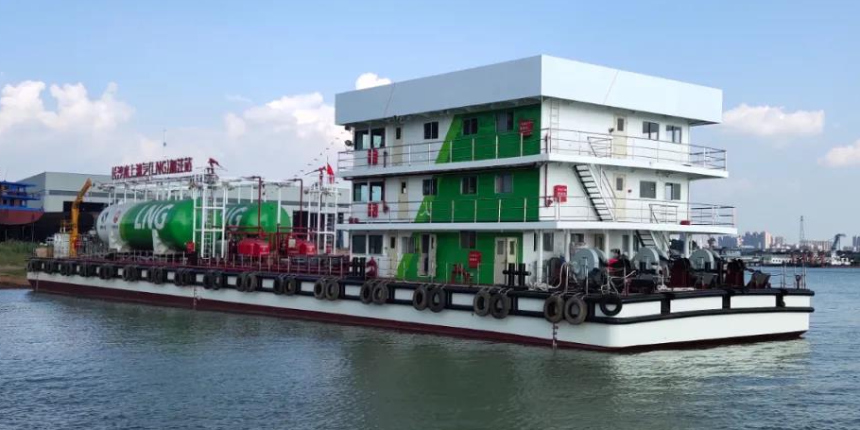 The LNG bunkering system was supplied by Houpu Clean Energy. This system includes the storage tanks, the fuel transfer pumps, and even the re-liquefaction equipment used for dealing with instances of boil off wherein gas in the cargo tanks evaporates due to unavoidable warmer temperatures. Any evaporated gas that is converted back into liquid form may then be redirected to the cargo tanks, thus mitigating the problem of LNG losses while underway.

Some of the “re-converted” gas may even be used to power the vessel’s own electrical generator sets, which have been configured to run on LNG to further reduce emissions.

In addition to performing ship-to-ship bunkering, the newbuild may also perform quayside supply wherein it will offload LNG directly into dedicated tanker lorries for distribution to land-based end users. This option will be employed as an alternative in delivering LNG to customers in Hunan when weather conditions would prohibit the transport of LNG via the province’s waterways.

Xiang Neng Yuan Yi Hao is owned and operated by the provincial government of Hunan via the Hunan Provincial Water Transportation, Construction, and Investment Group (HWTIG). The vessel officially began operations in the province’s rivers in July of this year. For much of its operations, it will be berthed at the Changsha LNG bunkering station on the west bank of the Xiangjiang, which will also form part of the much larger Hunan LNG supply network.