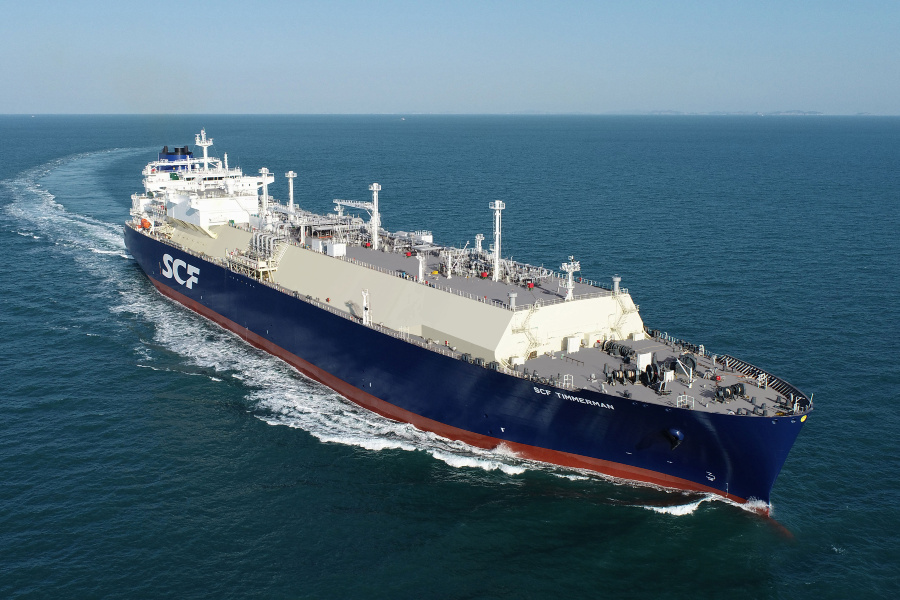 Classed by Bureau Veritas and sailing under the flag of Liberia, the newbuild has been named SCF Timmerman in honour of Frans Timmerman, the 17th century Dutch navigator and merchant who is best known among Russian historians for being a shipbuilding mentor to Emperor Peter the Great.

A WinGD X-DF slow-speed, dual-fuel engine enables the vessel to sail at 19.5 knots, all the while complying with IMO Tier III regulations covering NOx and SOx emissions especially when operating in gas mode. With these emissions standards being adequately satisfied, and with smokeless gas operation being possible at all speed settings, the newbuild is an ideal platform for LNG trading on the global market.

SCF Timmerman was designed to be fully IMO Tier III-compliant when operating in gas mode even without the incorporation of an exhaust gas aftertreatment system. However, some NOx emissions will still be generated while sailing in diesel mode, and so a dedicated system for reducing such emissions has been installed on the ship as well.

Should the need arise, switching the engine from gas mode to diesel mode can be executed instantaneously at any power setting without any loss in power or speed. Switching from diesel mode to gas mode may also be done, though only when engine power is below 85 per cent to ensure there is no loss in power or speed. The ability to easily transition from one operating mode to the other ensures greater flexibility on long voyages and in entering ports with strict emissions regulations.

An optimised hull design combined with a bulbous bow further improves the ship’s operating efficiency. SCF said that this attribute and the low emissions being generated will enable the ship to operate as part of its LNG carrier fleet for decades.

Like its sisters, SCF Timmerman has been fitted with a partial reliquefaction system that helps address the phenomenon of boil-off gas, which can occur whether the ship is underway or pierside during cargo loading operations. Boil-off gas caused by unavoidable warmer temperatures is redirected and reliquefied by the system to allow it to be re-used by the ship’s dual-fuel engine, thus minimising instances of cargo loss.

The vessel’s other notable features are its LNG cargo tanks, all of which utilise an innovative membrane design developed by French cargo containment specialist GTT. The tanks’ membranes are made of corrugated stainless steel and a secondary composite material as well as foam insulation with a density of 130 kilograms per cubic metre. The tanks themselves are capable of not only storing LNG at low temperatures during loading and transit; they are also capable of keeping the boil-off rate to what GTT has claimed is a reasonably low level of 0.085 per cent.