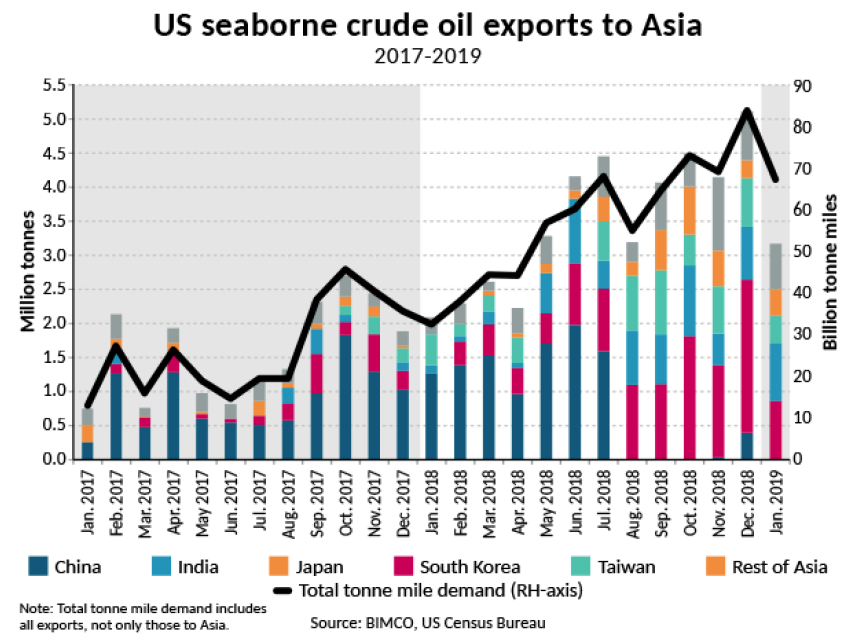 In January, the Netherlands was the largest importer of US crude oil, beating Canada even when considering total and not just seaborne exports. South Korea, the biggest importer of seaborne crude oil exports in 2018, fell to fourth place in January 2019. Until the summer of 2018, China was the largest, accounting for 23.3 per cent of all seaborne exports in the first six months of 2018, took nothing in January.

“Although small volumes of US crude oil were sent to China in November and December, following a three-month pause in the trade, BIMCO did not take this as a sign that tensions between the two countries had eased, and were therefore not surprised by the lack of exports to China in January. A positive outcome from the ongoing trade negotiations is needed if this trade is to return to levels seen before the trade war,” said Peter Sand, BIMCO’s Chief Shipping Analyst.

Despite record high volumes, January exports were disappointing for the shipping industry

Although volumes were record high in January, tonne mile demand dropped following a record-breaking peak in December. US seaborne crude oil volumes generated 83.8 billion tonne miles in December, falling 19.7 per cent to 67.3 billion in January, still over twice as many as in January 2017.

“The importance of Asia cannot be underestimated when considering how US crude oil exports impact the shipping industry. In 2018, 71.5 per cent of tonne mile demand generated by US crude oil exports originated from exports to Asia. The sudden drop in exports to Asia in January was therefore particularly harmful to the crude oil tanker shipping industry,” added Sand. “VLCC earnings rose to 53,121 USD per day in November, when vessels are being fixed for the following month, before falling again in January when tonne mile demand dropped.” 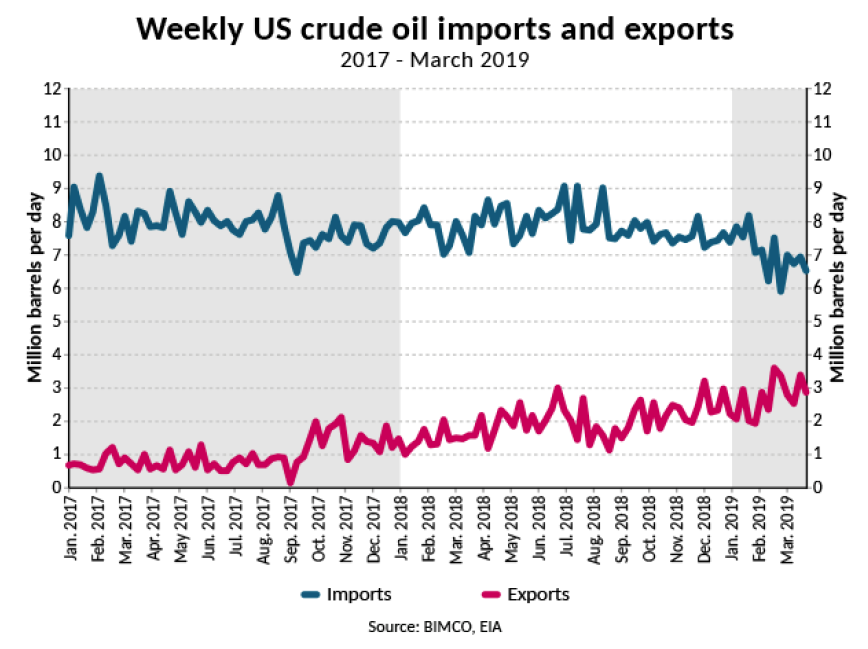 US exports of crude oil have grown exponentially since the ban on exporting crude oil was lifted in December 2015. In 2016, Saudi Arabia exported 24 times as much crude oil by sea than the US, but in 2018 Saudi Arabian exports were only 4 times as high as US exports.

“Much of the growth in total seaborne crude oil exports comes from the US, where a massive increase in exports overshadows the more modest growth and even declines experienced by the established crude oil exporting countries.”

Infrastructure investments needed for continued growth in US exports

There is currently only one facility in the US capable of fully loading a VLCC, the Louisiana Offshore Oil Port (LOOP), which was recently refurbished so that it could offload as well as load crude oil tankers, thereby catering to the growing demand for crude oil exporting facilities in the US Gulf.

Further investments into the US Gulf to ensure its ability to meet the new demands, include terminals able to cater to VLCCs in Corpus Christi, expected to be ready by the end of 2020. Five other projects are being discussed, all designed to meet the requirements to cater to VLCCs and spread across Louisiana and Texas.

“It is unlikely that all of these projects will see the light of day, but for the US to continue to increase its crude oil exports, these types of infrastructure investments, whether into onshore or offshore facilities, are needed,” said Peter Sand.

Royal IHC delivers dredger to Subtech for work in Mozambique