Global economic growth continues to slow with recession warnings sounding in many corners of the world, none of which points to high global trade volume growth for the time being, according to BIMCO.

The Global Manufacturing PMI (Purchasing Manager’s Index) reported by IHS Markit, has been under the threshold level of 50 in every month since May, reaching 49.5 in August, indicating four months of contraction. At 49.3 the index reached its lowest level since October 2012 in July. 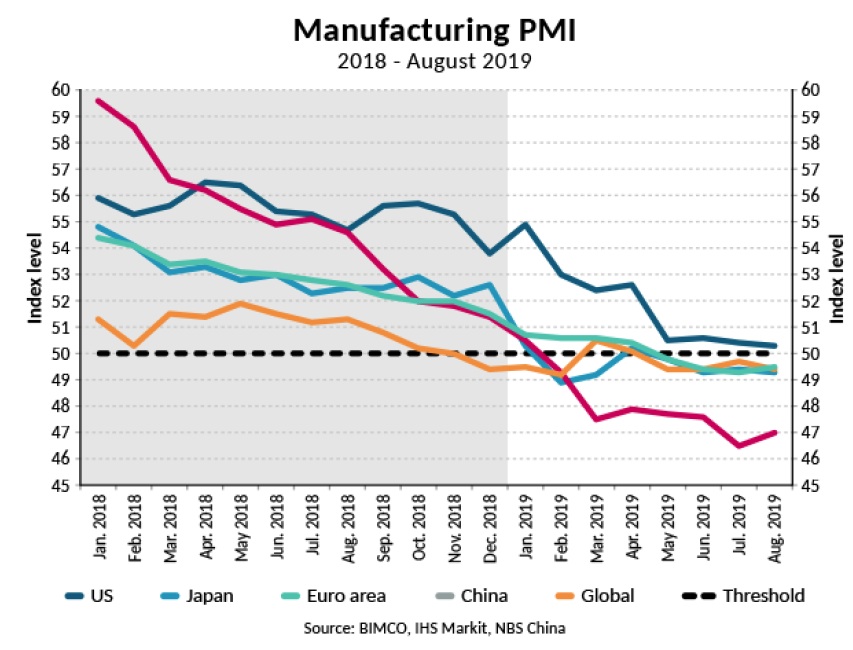 Global trade volumes of manufactured goods also continued to contract in July with lower production and fewer new orders signalling that this trend is likely to continue at least over the next few months. The new exports sub-index fell to 47.5 in August from 48.3 in July, as international trade volumes fell at their fastest rate since late 2012. (Source: JP Morgan).

On the back of increased trade tensions in many regions of the world, as well as slower than anticipated growth, the IMF in July updated its growth projections for the global economy in 2019 down to 3.2 per cent (down 0.1 from April), while forecasting an increase to 3.5 per cent in 2020 (down 0.1 from April). This update came before the most recent escalation of the trade war between the US and China in which the US has announced tariffs on US$300 billion worth of Chinese imports and the Chinese have responded with tariffs on US$75 billion worth of US imports. BIMCO said it expects the IMF to lower growth projections in its next report.

The new US tariffs will have a limited impact on shipping as these are mostly high value containerised goods, and although the Chinese will add tariffs on bulk goods such as crude oil, these bulk trades have already been severely disrupted, which the shipping industry has already adapted to.

In particular, the continued slowdown in manufacturing is highlighted as a reason for slowing growth as well as low business spending and consumers shying away from buying capital goods.

The WTO predicts that growth in the volume of world merchandise trade will slow to 2.6 per cent in 2019, from 3.0 per cent in 2018, a growth rate the WTO expects will return in 2020. Like the IMF, the WTO highlights the differences across nations, with growth in developing countries expected to outpace that in developed. Developing nations are expected to grow exports by 3.4 per cent and imports by 3.6 per cent, whereas developing nations are expected to see 2.1 per cent growth in exports and 1.9 per cent growth in imports. The WTO highlights that trade tensions would have to ease for these growth expectations to be increased.

Germany’s economy is the biggest cause for concern in Europe, where falling GDP in the second quarter has led to concerns of the country heading for a recession.

Germany’s manufacturing PMI rose slightly to 43.5 in August, up from 43.2 in July, which was its steepest decline in seven years. Leading the decline in July was the largest fall in new export orders since 2009, as well as output falling at a faster pace. The German economy has been hit hard by weakening demand domestically as well as internationally, including the effects of US-inspired trade tensions, which Germany, and its export heavy economy has been hard hit by. 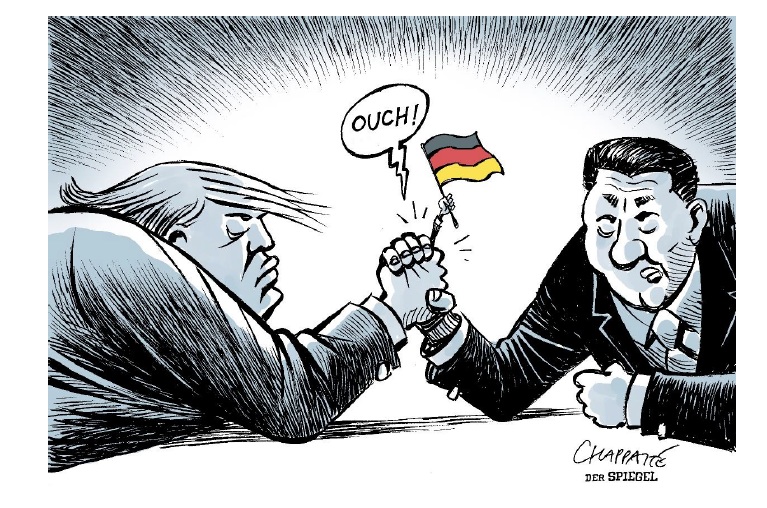 to sales in particular have slowed, with figures from the German Association of the automotive industry (VDA) showing that production is down 12 per cent in the first seven months of the year compared to the same period last year, and exports are down 14 per cent, with a slowdown in auto sales in China in particular hurting German exports.

Although the economic data points to a weakening economy, the Port of Hamburg has had a strong first half of the year, with total seaborne cargo handling up 4.1 per cent compared to the first half of 2018. Imports of full containers has risen by 8.0 per cent, meaning the port handled 4.1 million TEU in the first six months of 2019.

The IMF still expects the euro area as a whole to grow by 1.9 per cent in 2019, and have raised their growth forecast by 0.1 to 1.6 per cent in 2020 since April. At the time of writing, it is expected that the ECB will on September 12 announce a broad range of stimulus to combat this slowing growth, including potential interest rate cuts.

Despite stockpiling ahead of the then Brexit deadline giving a boost to first quarter UK GDP, the the IMF forecasts growth of just 1.3 per cent in 2019. The UK’s Office for National Statistics highlights falling production and construction as the main factors pulling down growth. In Q2, the manufacturing sector experienced its fastest slowdown in a decade. Growth projections are based on the assumption that Brexit will take place in an orderly manner although, with the latest deadline only weeks away, this remains unclear. European short-sea shipping faces high uncertainty and potential disruption, but the impact of Brexit will have little effect on global shipping.

The IMF has revised its growth expectations for the US upwards by 0.3 to reach 2.6 per cent in 2019, on the back of a strong first quarter, although it expects growth to slow in the remainder of the year. GDP growth was at 3.2 per cent in the first quarter, yet fell to 2.1 per cent in the second. Statistics from the Bureau of Economic Analysis (BEA) showed that lower inventory investments, exports and investment in capital goods slowed growth in the second quarter, despite increased spending by both the federal government as well as consumers. Growth is expected to slow in 2020 to 1.9 per cent, with the effects of the stimuli, such as the tax cuts winding down.

The US’ manufacturing PMI remains just above the threshold of 50, posting 50.3 in August. Although this figure still signals growth, it is the weakest expansion since September 2009, with June and July also posting disappointing results of 50.6 and 50.4 respectively.

Financial markets are beginning to voice concerns over a potential recession which would bring the longest US expansion on record to an end. In July the US Federal Reserve cut interest rates for the first time in more than a decade, and is said to be considering furthur stimulus measures, with an announcement on policy due on September 18.

Growth continues to slow in China although it remains very high; GDP growth was reported at 6.2 per cent in Q2 2019, and 6.3 per cent in the first half of the year, according to the National Bureau of Statistics China (NBS). The IMF forecasts that full year growth will be 6.2 per cent in 2019 and 6.0 per cent in 2020. Weakening exports from slowing global growth as well as trade tensions have hurt the economy, with manufacturing and infrastructure slowing.

Although consumption remains on the right path, car sales have slowed 11.4 per cent in the first seven months of the year according to the China Association of Automobile Manufacturers, with production down 13.5 per cent. BIMCO has previously explained why it does not believe that Chinese GDP is a reliable indicator of the Chinese economy on its own and that it therefore pays to follow data on imports/exports as well industrial production.

The Chinese government has launched several stimulus programmes over the past few months. Latest measures include reforms to interest rates aimed at lowering borrowing costs to boost spending.

Industrial output was in particular concerning by Chinese standards in July when it grew by just 4.8 per cent, which is the weakest it has been in China since February 2002, adding to the worry that the stimulus measures have so far done little to stop the long term trend, despite some short term good news at the start of the year. 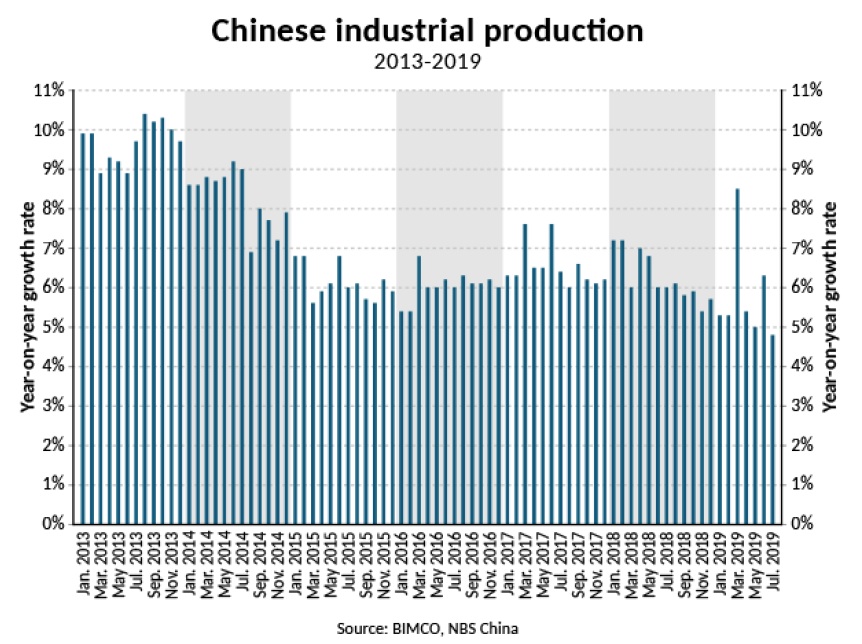 Elsewhere in Asia rising tensions between Japan and South Korea are being played out. Originally down to a dispute over compensation for wartime forced labour, the countries have each removed the other from their lists of preferred trading partners, causing delays to those trading, as well as placing trade restrictions, as Japan has done on three high tech materials that South Korea’s economy relies on.

As with trade wars elsewhere, this will not only hurt the two countries’ economies, in a time when in particular South Korea’s is already struggling, but also others’. Although the volumes of impacted goods has so far remained very low, shipping is held hostage in the situation and should the conflict escalate further, shipping volumes between the two countries, as well as to the rest of the world, could be impacted.

A delay in the implementation of tariffs on the most sensitive goods, such as phones and laptops appears to be an admission by the US government that increasing tariffs hurt US consumers. The first half part of the tariffs will be implemented on September 1, and the rest will follow on December 15, with the Chinese retaliation following the same timeline.

The July IMF update to its 2019 growth forecasts from April shows that advanced economies are performing somewhat better than expected while the opposite is the case for emerging economies, with growth revised upwards by 0.1 and downwards by 0.3 respectively.