Australia–Indonesia defence relations have had their ups and downs, even after the signing of the Lombok Treaty. However, the “sawtooth” pattern started much earlier. In the late 1980s, after more than a decade of relatively successful defence cooperation, an article by journalist David Jenkins on corruption in the Suharto family threw defence relations into a deep freeze for a few years. After a gradual thaw and renewal of relations, both countries signed the 1995 Agreement on Maintaining Security (AMS). The agreement was subsequently scrapped following the East Timor intervention in 1999 and high-level official contacts as well as military-to-military links were curtailed. After another rebuild that led to the Lombok Treaty in 2006, defence relations were suspended to different degrees in 2013 and late 2016. 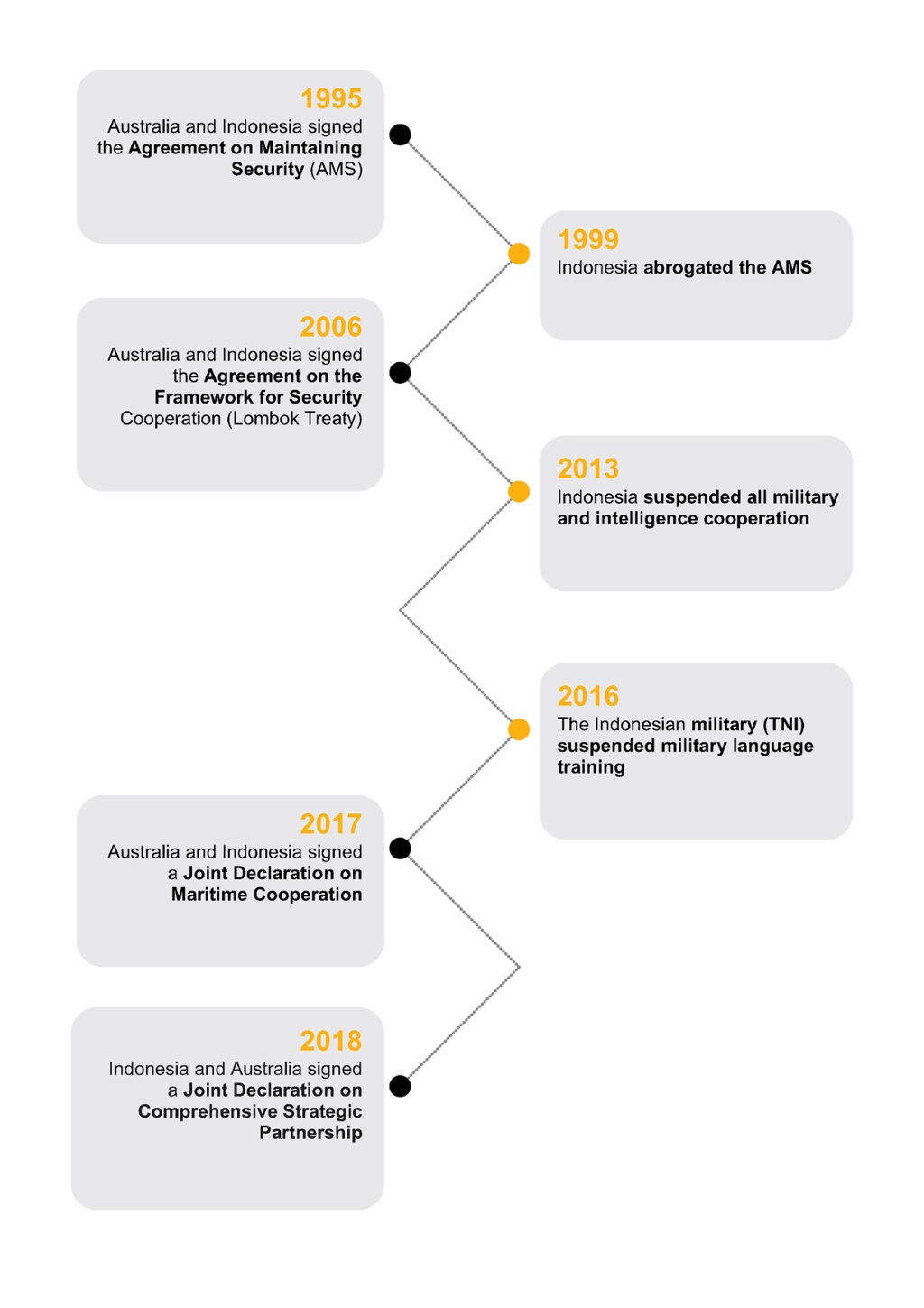 When explaining this trajectory, analysts tend to follow an established research tradition in Indonesia–Australia studies centred on a set of key themes. They emphasise fundamental differences (Indonesia and Australia are two states with very different political, social, and cultural traits), cooperation on common interests (differences notwithstanding, both countries should cooperate as neighbours with a long history), and the quest for “ballast” to sustain cooperation, accomplished by widening the areas and levels of engagement.

While these themes provide a useful framework for bilateral relations, they do not fully explain the sawtooth pattern in defence relations. The politicisation of defence cooperation by both Jakarta and Canberra help explain the trajectory. The defence relationship has always been central to bilateral dynamics between the two countries. However, it is precisely because of this that TNI–ADF relations have not been developed and institutionalised as a collaborative process to jointly manage shared security challenges.

In other words, the defence relationship has been unstable because it has not been developed as a (primarily) defence relationship. It is instead driven by broader bilateral interests. Of course, security relations are expected to serve broader political goals, but the unique centrality of TNI–ADF relations — in terms of profile, duration, and sensitivity — has pushed the subordination of defence engagements to bilateral interests to the point where the defence character has faded.

Ideally, defence cooperation should be developed with defence-related outcomes in mind. For example, joint exercises should be geared towards improving interoperability. However, Jakarta and Canberra rarely measure the success of defence cooperation by such defence-specific indicators. Instead, both sides evaluate it by the extent to which it contributes to bilateral political goals.

For Indonesia, training with Australia has occasionally met genuine military training needs. More often, however, defence cooperation has been valued pragmatically or politically including to signal international credibility or as an entry point to weapon supplies. After East Timor, for example, senior TNI officers were reportedly seeking to restore relations with the ADF as a “badge of international acceptability” so that the United States would drop its military training and weapons ban.

Earlier, Australia acted as conduit between Indonesia and the United States to maintain communication in the wake of the 1991 shooting of hundreds of East Timorese pro-independence demonstrators in Santa Cruz Cemetery in Dili. Even the AMS was partially driven by Suharto’s need to demonstrate total control by defying senior military officers who opposed the agreement. More recently, following the 2013 suspension of military and intelligence cooperation, one Indonesian official noted that defence cooperation was “expendable” (ie. open to suspension) because it could send “a strong enough signal of displeasure” without the downside of affecting “real practical bilateral issues like tourism or trade”.

These examples illustrate that political considerations, rather than joint security challenges, drove defence cooperation activities. As such, defence relations were not sufficiently institutionalised to the point that Jakarta and the TNI were “attached” to the ADF or Australia that they would vigorously seek to prevent defence suspension when the political situation deteriorated.

Australia, meanwhile, traditionally values defence cooperation with Indonesia less for its ability to develop joint capabilities to deal with shared challenges than for its non-defence benefits. First, it acts as Canberra’s self-promoted litmus test for its bilateral commitment. As noted in an Australian parliamentary report following the AMS, “the agreement symbolises the progress the Australian Government has made in developing one of the country’s most important but most difficult bilateral relationships”.

Finally, cooperation provides access and influence built around personal relationships. According to a 2001 audit report, the Defence Department made “access and influence” the core goals of defence cooperation. The commonly cited example is the value of joint education and training during the 1999 East Timor crisis. Jim Molan, Australian Defence Attaché to Jakarta at the time, claimed, “our access and insight into the Indonesian military allowed Australia’s government to make Indonesia policy decisions with confidence”.

Subsequently, some suggested that Australia’s defence engagement could have “beneficial political spin-offs” as well as act as “a way of helping Jakarta to create a viable and effective military structure”. Another assessment argued that defence cooperation may give Australia, “an entry to high-level Indonesian Government officials, and may provide Canberra with at least a modicum of influence over Indonesian domestic and foreign activities”. After all, as the argument goes, dozens of senior Indonesian officers were graduates of Australia’s training college at Weston Creek. These different analyses occasionally mention defence-related goals (eg. interoperability) as secondary benefits, but perhaps of negligible importance if they did not materialise.

Canberra may be gradually shifting this approach. As the 2016 Defence White Paper noted, defence engagement with Indonesia is now explicitly geared to, “counter mutual security threats”. However, this recent shift does not erase a path-dependent history of underdeveloped defence relations qua defence relations. In interviews conducted by the author with Australian analysts, officials, and retired officers, they always highlight the importance of defence relations for bilateral relations. When pressed for defence-specific outcomes or measures, most recognise that current programs have limits in shaping the TNI’s development and improving its professionalism.

Since defence-specific goals have never been the primary benchmarks in evaluating defence cooperation, an institutionalised defence relationship primarily characterised by shared security, let alone maritime, challenges has never fully materialised. Consequently, the various defence engagement activities have not received the careful consideration they deserve. This problem can be remedied by looking at Australia’s defence engagement with Indonesia and considering how to recalibrate it to fit a shared maritime vision.