Written by Baird Maritime on April 4, 2017. Posted in Ship World. 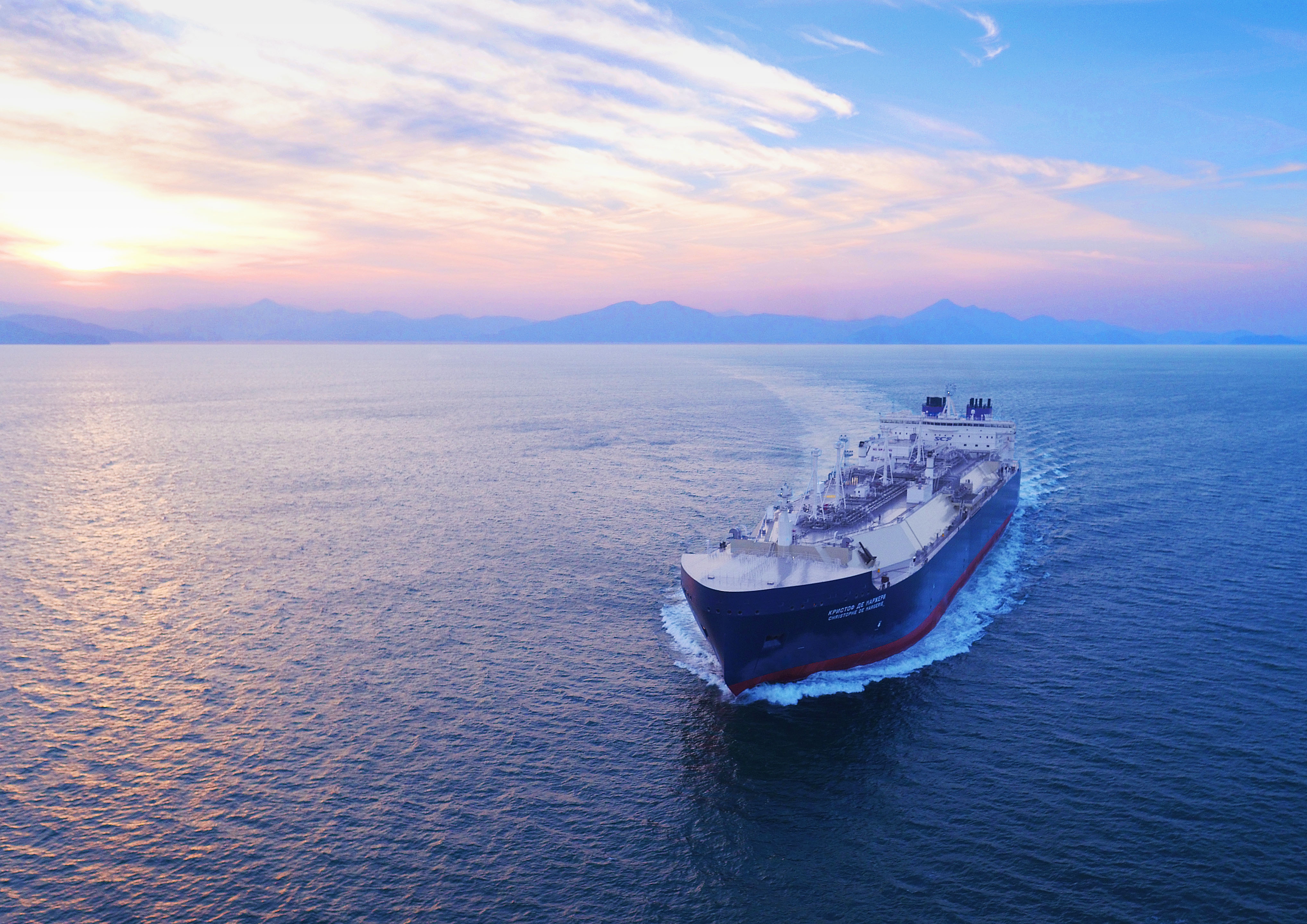 Christophe de Margerie, the world’s first ice-breaking LNG tanker, has successfully berthed at the gas terminal at Sabetta Port in Russia, becoming the first vessel to do so. The vessel was designed and built to order by Daewoo Shipbuilding and Marine Engineering for the SCF Group (PAO Sovcomflot), specifically to serve Russia’s Yamal LNG project, and transport LNG all year round in the difficult ice conditions of the Ob Bay and Kara Sea.

On March 30, the vessel’s master, Sergey Zybko, reported to Russian President Vladimir Putin the successful completion of ice trials and the first mooring at the Yamal LNG terminal at Sabetta. The ceremony was attended by Maxim Sokolov, Russia’s Minister of Transport, Alexey Texler, First deputy Minister of Energy, and Li Fanzhun, Deputy Head State Energy Administration of the People’s Republic of China.

“I should like to congratulate everyone on today’s event. I congratulate the Russian participants and our foreign partners. The arrival of this new tanker, designed for Arctic conditions, is a big event in Arctic development, as is the construction of the port of Sabetta, where the tanker docked today. The port was built entirely from scratch,” said President Putin in his salutary address.

“I should like to draw your attention to the fact that in developing the Arctic’s enormous wealth, our basic principle is not to cause any harm. We realise that this region’s ecosystem is very sensitive to any human interference. But I know your work in detail and I know for certain that the port, the ships that will use it, the production methods used, and the transportation system all use the most advanced technology and meet the highest environmental standards. The first of the new ships docked today. Fifteen of these ships will be built in total, with the involvement of Russian shipbuilders.”

The specifications of Christophe de Margerie make her a unique vessel. She was assigned an Arc7 ice class, the highest ice class amongst existing merchant vessels. The vessel is capable of sailing independently through ice up to 2.1 metres thick. Christophe de Margerie can sail along the Northern Sea Route westward from Sabetta all-the-year-round and eastward for six months of the year (from July to December). Previously, the summer navigation window on the Northern Sea Route was limited to only four months with ice-breaker support.

The total power of the vessel’s propulsion system is 45MW. For comparison, the world’s first nuclear-powered ice-breaker, Lenin, had a power output of only around two thirds of this figure at 32.4MW.

In just one voyage, the vessel can carry 172,600m3 of LNG, which is sufficient to supply the country of Sweden with all its gas requirements for almost four weeks. The vessel is 299 metres long and 60 metres deep.

The crew numbers 29, all of whom are Russian seafarers and 13 of which are officers. On top of the significant Arctic shipping experience each officer has, he or she has undergone extensive training at Sovcomflot’s own training centre in St. Petersburg.

“Today’s events are the result of a painstaking and thorough collaboration between Sovcomflot, Novatek, and Yamal LNG which took close to ten years,” added Sergey Frank, President and CEO of the SCF Group. “A project of this scale and complexity required a thorough evaluation of all the details. This is fully justified: the Arctic does not forgive those that rush and lack professionalism. The starting point was the the successful experience of SCF Group working in energy projects in the Barents and Pechora Seas, as well as two experimental transit voyages along the Northern Sea Route, undertaken by Sovcomflot and Novatek in 2010-2011 with the support of Russia’s Ministry of Transport and Atomflot. Together, we have proven that using high-latitude routes as a transport corridor, for large-capacity vessels, is not only technically possible but also economically feasible. In many ways, these results have laid the foundation for the successful implementation of the Yamal LNG project, which would have been impossible without an efficient and safe logistics scheme to transport LNG by sea.”

Christophe de Margerie is the prototype for a series of 15 gas carriers planned for the Yamal LNG project. The appearance of this particular gas carrier signalled the market debut for Yamalmax ships, a new class of vessel.

The propulsion system of the new gas carrier consists of Azipod type propulsion units. They provide a very high degree of manoeuvrability, and allow use of the stern-first motion (double acting tanker, DAT function) principle, which is necessary to overcome hummocks and heavy ice fields. Uniquely, Christophe de Margerie has three Azipods – this is the first time so many of these propulsion units have been installed on an Arctic ice class vessel.

During her maiden call at Sabetta Port, the vessel successfully carried out a trial passage through the purpose-built seaway canal, the most difficult part of the Ob Bay in terms of navigation. The canal was created at the confluence of the Ob River in the Kara Sea, to allow large-capacity vessels to cross the shoal at the river mouth. This engineering structure, unique for the Arctic basin, is intended to be operated in difficult conditions of constant ice drift. The canal’s depth is 15 metres, its width is 295 metres, and length is 50 kilometres.

The vessel was built according to all requirements set by the Polar Code and is notable for her environmental safety. In particular, for example, along with traditional fuels the vessel can use LNG boil-off. Compared with conventional heavy fuel, the use of LNG can significantly reduce the emissions of harmful gases into the atmosphere. Sulphur oxides (SOx) are reduced by 90 per cent, nitrogen oxides (NOx) by 80 per cent and carbon dioxide (CO2) emissions by 15 per cent.