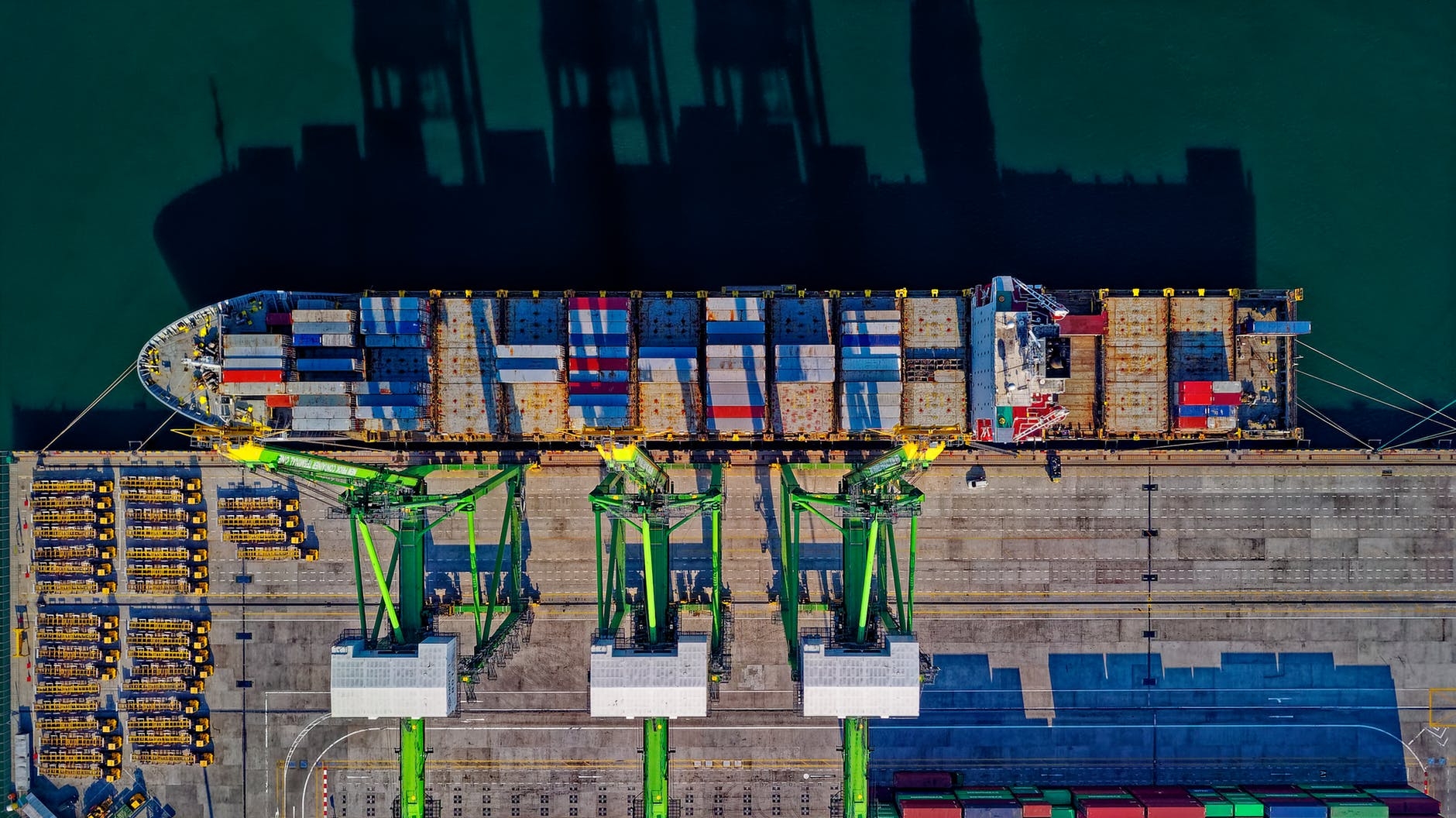 Economic growth around the world is slowing, and several governments – including Germany, China and South Korea – have announced stimulus packages to boost their economies. The International Monetary Fund (IMF) forecasts global GDP growth to slow from 3.6 per cent in 2018 to 3.3 per cent in 2019, before returning to 3.6 per cent in 2020.

Advanced economies have the highest trade-to-GDP multiplier, and this softening will therefore reduce global trade volumes faster than the forecast 4.4 per cent 2019 growth in emerging economies will generate them. The combined result is a reduction in trade growth. 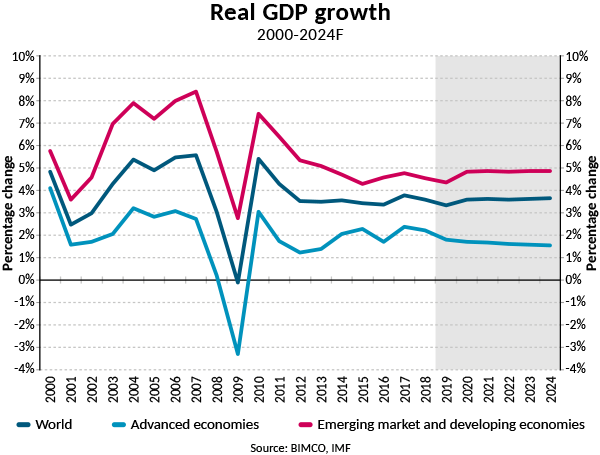 The Global Manufacturing PMI (Purchasing Managers’ Index), reported by IHS Markit, registered at 50.3 in April – its lowest level since June 2016. New export orders came in at 49.0 – signifying a contraction for the eighth month in a row. This contraction has dragged global trade growth down. 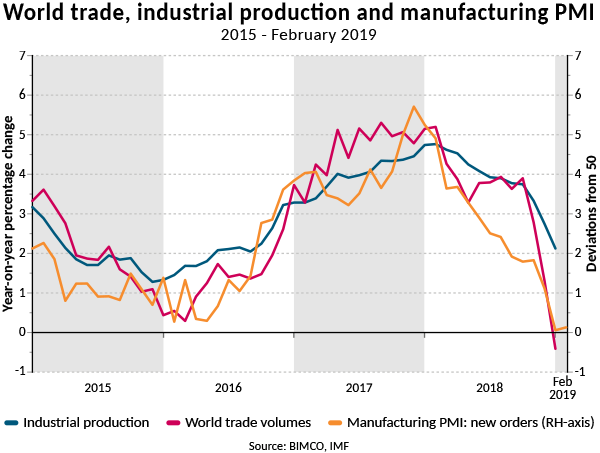 Manufacturing PMI in the euro area has been contracting since February. It reached 47.9 in April –close to the 47.5 mark registered the previous month, which was a six-year low. The numbers vary greatly between the euro area countries, with Greece topping the list at 56.6 (its highest level in almost 19 years), and Germany at the bottom at 44.4. Germany is the export engine of Europe, so such a downturn is bad news.

Because of its dependence on exports, Germany has been hard hit by the slowdown in the global economy, which has reduced demand for its products. In particular, the slower growth in the Chinese economy is making itself felt in Germany. But Germany is also affected by the trade tensions between the US and the EU, as it is the largest European exporter of steel and aluminium products to the US, where they are now subject to tariffs. Other factors weighing heavily on the German economy include the disruption to automobile supply chains caused by new regulations on car emissions.

The growth projections for Germany have been revised downwards by the IMF. In its latest update from April 2019, it projects 0.8 per cent growth in 2019, down from 1.5 per cent in 2018. The German government has announced plans for additional infrastructure spending. It will also support companies by reducing corporate levies and cutting red tape. A marked turn around will have to occur if the German economy is to meet the 1.4 per cent growth the IMF forecasts for 2020.

Germany is not alone in facing slowing growth. The IMF predicts growth of only 0.1 per cent for Italy in 2019 and 1.3 per cent in France.

The deadline for Brexit has been delayed to October 31, 2019. While this removes the immediate risks of Britain leaving the EU without a deal, it prolongs the period of uncertainty, with no guarantee that the situation will be resolved before the new October deadline. Uncertainty is toxic for business investments, and the political effort consumes time that could be better spent removing trade barriers.

The flash estimate for growth in the first quarter of 2019 came in quite high, at 3.2 per cent (a flash estimate is one that the US Bureau of Economic Analysis (BEA) subsequently revises twice, following the receipt of more solid data). Growth in personal consumption expenditures, private inventory investment, local government spending, and a slightly reduced trade deficit in the quarter were important factors in that development.

In 2018, the total US trade deficit was at a record high at US$891.3 billion, with the largest monthly trade deficit on record posted in December 2018 (see chart). One reason was that US buyers increased their imports in the last months of the year, to avoid the then-threatened tariff hike on some Chinese imports that came into effect on January 1, 2019.

Following this, in the first two months of 2019, imports fell as inventories were full due to the frontloading. The inventory/sales ratio increased to 1.47 in December 2018 from 1.43 in November, and grew to 1.48 in February. This rising ratio indicates that inventories are growing faster than sales, reducing import prospects for containerised goods on the trans-Pacific trade lane. 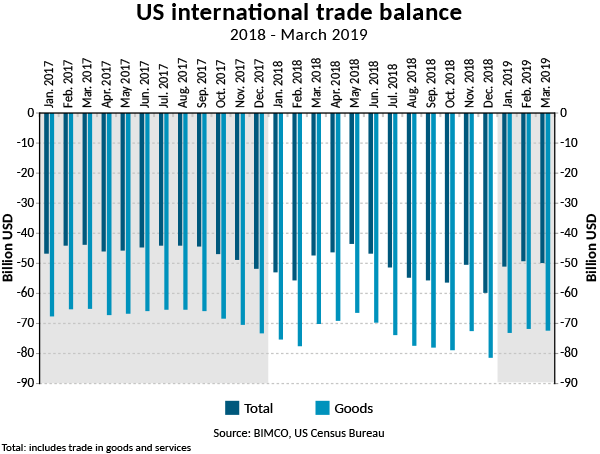 After pulling out of the Trans-Pacific Partnership (TPP), the US is now looking to agree a bilateral trade deal with Japan. The US has a considerable trade deficit with Japan (US$67.6 billion in 2018), and following the opening of the Japanese market to EU exporters and TPP partners, US exporters may face significant pressure in maintaining their share of the Japanese import market – especially for agricultural products – unless the two countries can agree a deal that would allow US exporters the same access to the Japanese market as its EU and TPP partners.

The flash Japanese manufacturing PMI in April shows a third month of contraction at 49.5, caused by weak demand both at home and abroad. Japan is somewhat caught in the middle of the US-China trade war and is also affected by the slowing Chinese economy, as China is its biggest trade partner.

On February 1, 2019, the EU-Japan Economic Partnership Agreement entered into force. It removes trade tariffs between the two trading blocs, and simplifies customs procedures, to encourage more trade in both goods and services. Reducing barriers to trade benefits shipping.

Recent stimulus measures taken in China to mitigate its slowing economy have apparently been successful, with economic indicators suggesting that economic activity has picked up. China’s official manufacturing PMI rose to 50.5 in March, after being below 50 – the threshold level – since December 2018 [source: National Bureau of Statistics China].

Although it remained above 50 in April at 50.1 – which indicates a month on month improvement – the fall compared with March suggests that the recovery may not be as strong as the March data had indicated. 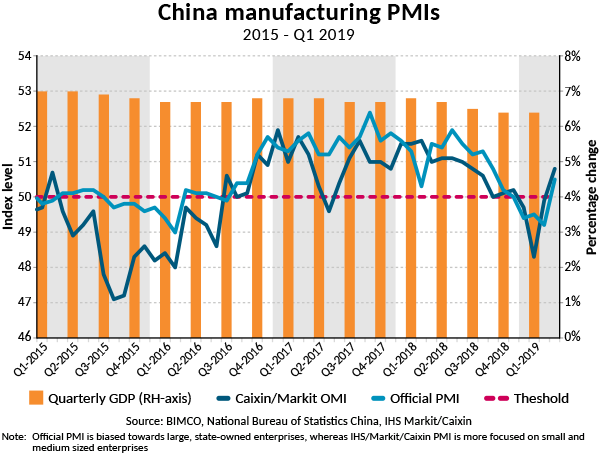 In March, South Korean exports were down for the fourth month in a row. The manufacturing PMI reached a six-month high in April, at 50.2. However, new orders continued to fall. In mid-April the Korean central bank cut its growth forecast for 2019 to 2.5 per cent, which would be the lowest GDP-growth rates in seven years. On the back of the weakening economic prospects, the Korean government announced a stimulus package of US$5.9 billion. Parts of this package went to Korean shipyards and shipowners.

The escalation of the trade war hurts not only the US and Chinese economies, but also the global economy. Global trade is so interconnected that the effects are – and will continue to be – felt by many more countries around the world.

Trade talks between the US and China have been ongoing throughout 2019. The original deadline in March was indefinitely postponed because of the progress being made in the talks. However, at the start of May, President Trump announced an escalation of the trade war, and increased the tariffs on imported goods from China from 10 per cent to 25 per cent on US$200 billion worth of imports. The Chinese response to this was higher tariffs (25 per cent) on imported goods worth US$60 billion currently subject to tariffs of five per cent to 10 per cent.

The shipping industry is reliant on global trade and will benefit from new free trade agreements. The slowing global economy and escalation of the trade war pose major threats to global seaborne trade.

Peter Sand is the Chief Shipping Analyst at BIMCO