Written by Baird Maritime on July 3, 2018. Posted in Ship World. 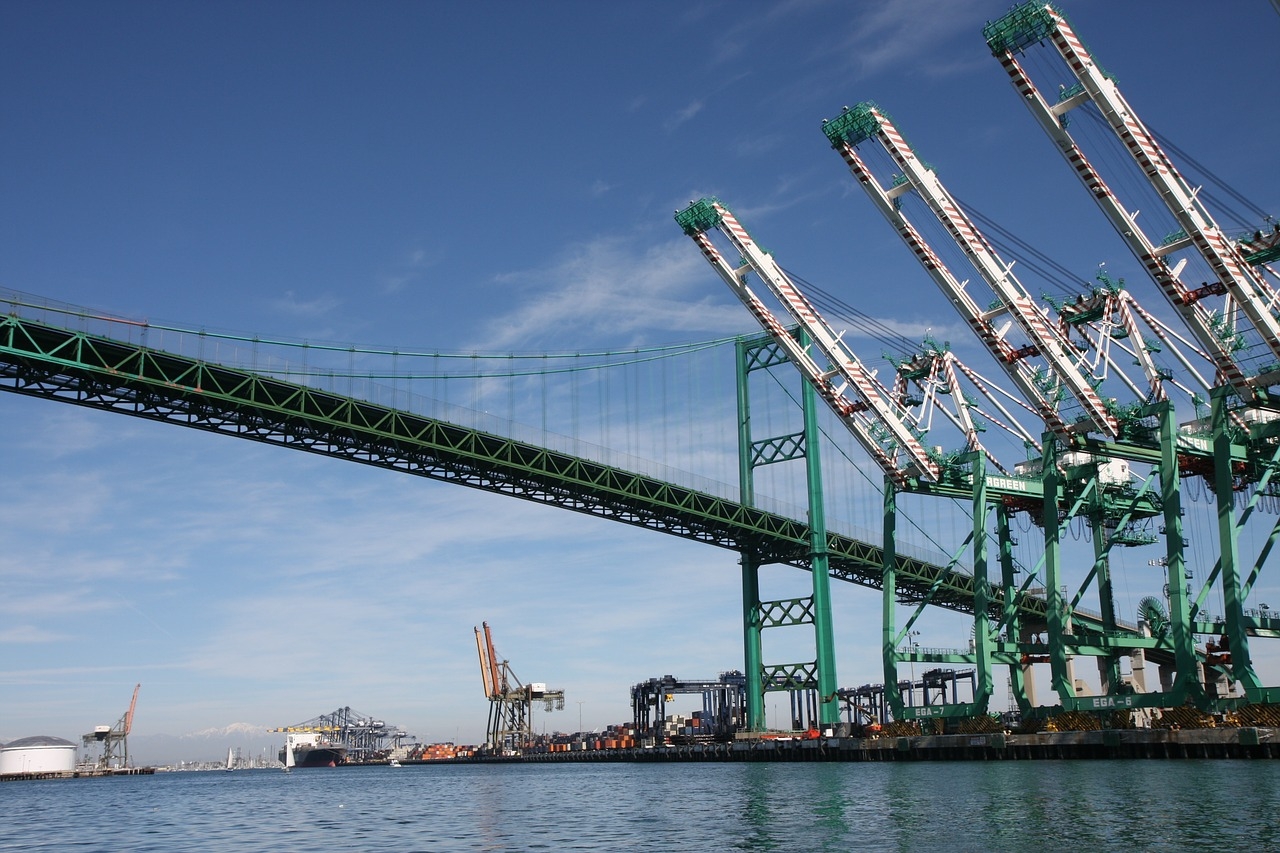 The trade war is a speeding train, accelerating with every trade-restrictive retaliatory measure imposed and becoming ever more difficult to stop.

The long-term effect provides uncertainty and could possibly derail current global growth if the measures are kept or further escalated.

Even though the world’s three largest economies are involved, the effect on shipping, in terms of volumes, is somewhat limited.

“The trade war adds painful uncertainty for the shipping industry, as it distorts the free flow of goods, changes trade lanes and makes it difficult for ship operators and owners to position ships efficiently in the market,” commented BIMCO’s Chief Shipping Analyst Peter Sand.

“The same can be said for container shipping, which although containerised goods have been and will be targeted again in July, the number of containers impacted is in the big picture relatively small”.

The US: effect on shipping remains limited

On 8 March 2018, the US imposed 25 per cent tariffs on steel and 10 per cent tariffs on aluminium citing national security reasons. At first, temporary exemptions were granted to seven trading partners. However, these were revoked for the EU, Mexico and Canada as of June 1, 2018. Australia, Brazil, Argentina and South Korea remain exempted.

Following failed talks between the US and China which sought to avoid further tariffs, the US announced in late May, that it would proceed with 25 per cent tariffs on US$50 billion worth of Chinese goods.

The first list of these goods, containing mostly machinery and electronics, worth US$34 billion, will enter into force on July 6. The second list, considering Chinese imports valued at US$16 billion, contains commodities such as plastics and oil products and is currently under review with no date given for its possible entry into force. 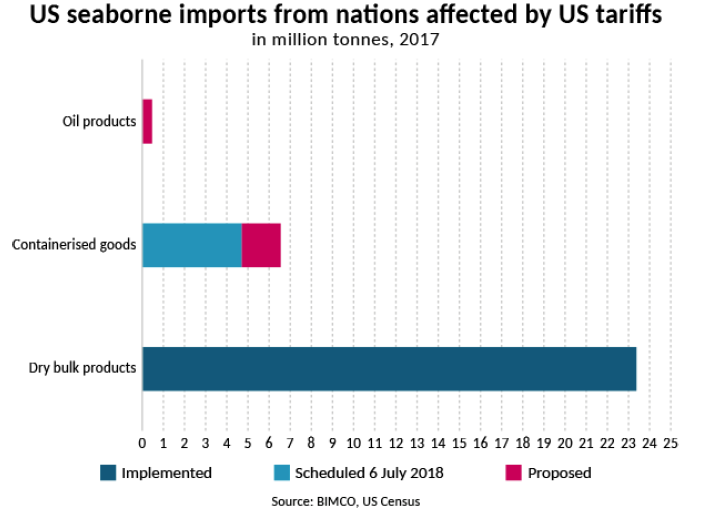 The tariffs on US$50 billion worth of Chinese exports to the US will affect the container shipping industry on the eastbound transpacific trade lane. The first list, worth US$34 billion, covers 4.7 million tonnes of containerised Chinese seaborne exports in 2017, equivalent to 470,000 TEU (10 tonnes per TEU). This amounts to 4.2 per cent of US West Coast (USWC) container imports in 2017. The second list, worth US$16 billion will add further tariffs on Chinese goods amounting to 2.3 million tonnes, of which 1.9 million tonnes (1.7 per cent of USWC imports) are containerised goods and 0.5 million tonnes are oil products.

China responded to the initial US tariffs on steel and aluminium on 2 April 2018, by targeting 128 products worth US$3 billion. These are primarily food, beverages and iron and steel products. China’s retaliation to the US$50 billion planned tariffs from the US was published June 17 and divided into two parts. 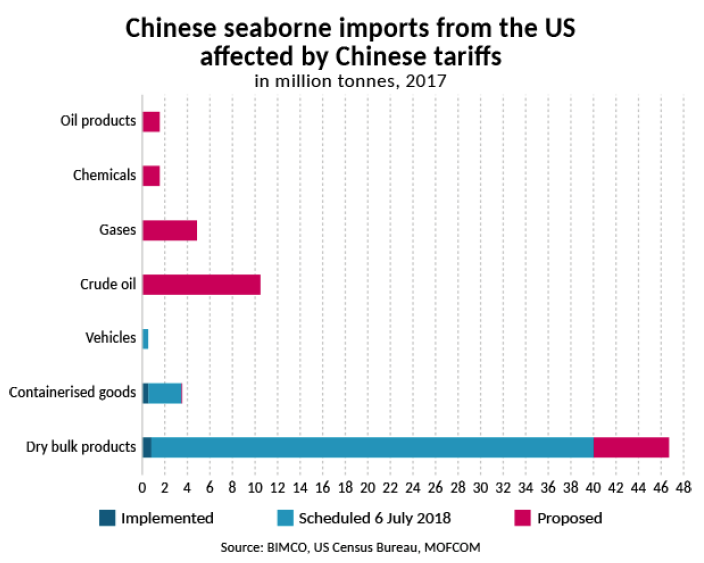 The dry bulk shipping industry is in terms of volumes the sector most affected by Chinese tariffs. The shipping of soya beans from the US to China is the largest “one commodity” cargo included, amounting to 32 million tonnes of imports in 2017, equivalent to 22 per cent of the total seaborne soya bean trade or 640 Handymax loads (50,000 tonnes).

BIMCO reported in April that the coming months will show us exactly how much Brazil can further ramp up its exports to China to substitute the tariffed US exports. In May, Brazil exported 12.35 million tonnes of soya beans via the sea, setting a record, but far from enough to fully substitute US exports to China.

If the proposed tariffs, amounting to US$16 billion, are implemented, the tanker and gas shipping industries can also expect changes to trade lanes. The industry expected to be the most effected is the US crude oil exports, which was primarily driven by China in 2017. China was responsible for 25 per cent of all US seaborne crude oil exports in terms of volumes in 2017.

“China is the centre of shipping for the dry bulk shipping industry but also the crude oil shipping industry,” said Sand. “The imposed tariffs will not decrease the Chinese demand for the included commodities, but instead cause changes to trade lanes, making distances the ones to look out for.

“In the case of China going back to West Africa for sweet crude oil, 1/3 of the sailing distance will be lost on that trade”.

The EU announced retaliatory tariffs on US$3.4 billion worth of US goods in response to the US not extending its exemption. These entered into force on June 22 and target a range of US exports from cereals and steel products, to politically sensitive goods such as Bourbon and motorcycles. 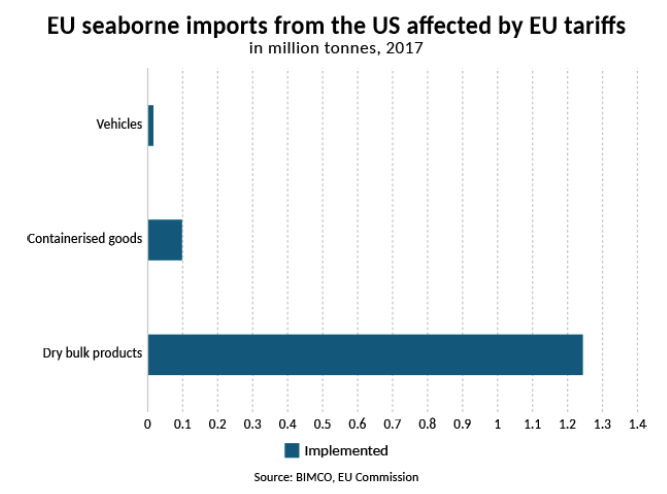 This round of tariffs covers goods which in 2017 amounted to 1.35 million tonnes of trade between the US and the EU. In 2017, a total of 1.24 million tonnes of the targeted dry bulk goods were exported to the EU from the US amounting to 24 Handymax loads (50,000 tonnes). Agricultural products were by far the largest part of this trade at one million tonnes, 90.5 per cent of which was maize, with steel and aluminium making up the residual.

Canada and Mexico: limited trade via the sea

The Canadian and Mexican tariffs’ effect on shipping remain limited, as most goods are transported via rail or truck. The largest shipped commodity affected is the Mexican imports of US steel products, which amounted to 200,000 tonnes in 2017, equivalent to just four Handymax loads (50,000 DWT).

“Despite the effect on shipping being somewhat limited, the trade between the countries becomes more cumbersome and less prosperous for the involved economies when trade barriers are raised,” concluded Sand.