Written by Baird Maritime on September 7, 2017. Posted in Ro-Ro World.

SEACOR Holdings and Genesee and Wyoming will form a 50/50 joint venture to own and operate CG Railway (CGR), a subsidiary of SEACOR recently acquired through its acquisition of the International Shipholding Corporation.

CGR operates a freight railroad providing a four-day rail-ferry service between the ports of Mobile, USA, and Coatzacoalcos, Mexico, which the company believes represents a faster and more cost-effective alternative to the traditional land route between the southeast US and southeast Mexico. The joint venture plans to immediately invest in the existing rail-ferry vessels to enhance service reliability. 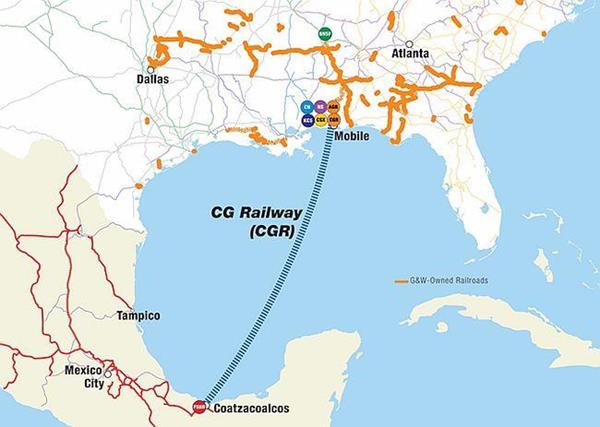 The CGR business comprises a US Class III freight railroad that connects in Mobile with G&W’s Alabama and Gulf Coast Railway (AGR), BNSF (via AGR), Canadian National (CN), CSX, Kansas City Southern (via CN) and Norfolk Southern and connects in Coatzacoalcos with Ferrosur, the railroad serving central and southern Mexico.

Assets include two 178-metre Ro-Ro rail ferries, each with the capacity to transport approximately 115 railcars per voyage, and long-term agreements to operate purpose-built rail ferry terminals in the ports of Mobile and Coatzacoalcos.