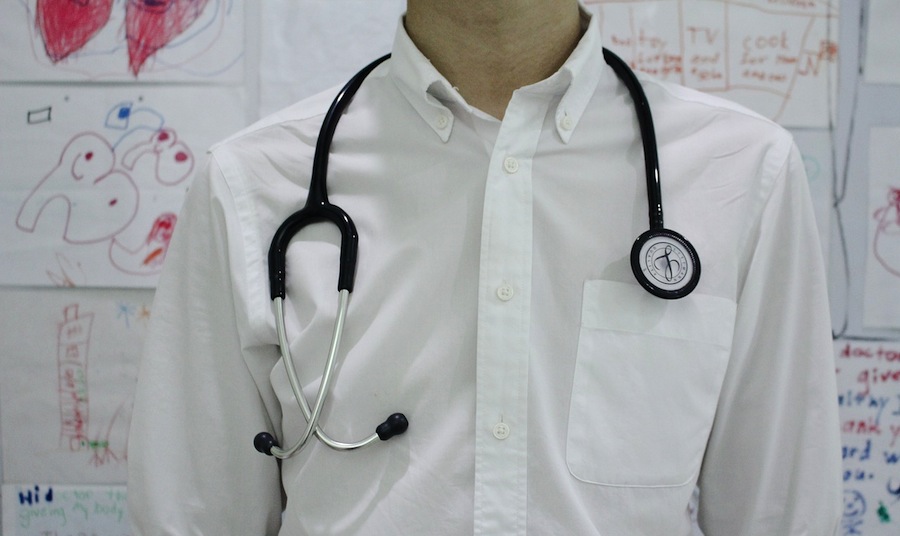 We are thinking a lot about medical professionals in these virus-infected days, people have been rightly identified as heroes for their hazardous work in combating the contagion. In our Commonwealth cargo liners, we were fortunate on most of our voyages to have a doctor on board, signed on as a supernumerary, for the month-long voyages between North Europe and Australia or New Zealand.

The regulations required ships carrying more than 100 souls to be provided with a doctor and we thus would not have qualified, except that there was a regular passage of medics between our countries and it was an excellent way of keeping us healthy for the sum of one shilling per month. The doctors were either going north to qualify as specialists, or having gained their special skills, going south to practice them, although we did find some who were just enjoying a holiday and a cheap passage, with free food and lodgings.

“I remember nearly fainting when the instructor brought out a skeleton”

By comparison with proper passenger ships and their complements of the elderly and frail, our doctors were not exactly hard pressed; our crews being mostly young and fit, with the exception of the occasional alcoholic and odd malingerers. But we liked carrying them for their different approach to life, conversation and the fact that their yarns weren’t those of seafarers. It was somebody different with whom to have a drink, and to my recollection most of them spent a fair time in our bar.

Best of all, having a doctor aboard meant that the Second Mate, or some other officer nominated by the Master, didn’t have to pretend to medical knowledge and stitch somebody up after they had cut themselves, set a broken bone or worse still, inject some shivering matelot suffering from what is called today a “STD”.

We had all undertaken what was laughingly described as a “First Aid Course” up for our Second Mate’s and were under no illusions about our adequacy as medical practitioners. I remember nearly fainting when the instructor brought out a skeleton and actually passing out when we were stitching up an artificial wound in a plastic arm. I can recall having to practice injection techniques, using a large rubber ball which allegedly replicated human tissue, and that seemed quite disgusting at the time. I still have the certificate which was dished out for attendance, whether one remained conscious or not.

Those unfortunates who were nominated would have the Ship Captain’s Medical Guide to aid their diagnosis, although I understand that a good rule of thumb was “aspirin for any ailment above the waist and two spoonfulls of Black Draught for anything south of that line.” The latter medicament was exactly what it said on the bottle – a noxious and evil-smelling liquid that would probably unblock drains, but roughly did the same with intestinal problems. It also dissuaded all but the hardiest malingerer.

With a proper professional aboard we never had to undertake some of the awful things that were faced by our brother officers in less well provided ships. There were terrible tales around of people stitching up wounds using sailmaker’s stitches and spun yarn, or having to extract teeth using pliers obtained from the Second Engineer.

I worked with a chap who swore he had been an apprentice on a ship in the South Atlantic, where the Master had undertaken an appendectomy on one of the crew on the saloon table, with his assistants passing out one by one and being dragged away, revived in the fresh air, and forced back inside to join the bloodstained spectacle.

I seem to recall that the Master’s ministrations with his scalpel were being guided by radio, with Sparks rushing in with fresh instructions, such as to, “make an incision 120 degrees and three inches from the patient’s navel.” Today it is possible to carry out quite involved surgery using Skype and clever cameras, although I think most people would prefer to get airborne on a Coast Guard medevac helicopter.

Some of the doctors we carried worked in some somewhat inappropriate specialities, such as a glamorous lady gynaecologist, who seemed to get a far longer than average queue at her morning surgery for our all-male crew. I once had some stitches in a head wound from an ophthalmic surgeon. One doctor who sticks in the mind was a chap who had been a pathologist in Australia for about forty years, who told us we were the first patients he had seen for all that time who weren’t actually dead.

He was an exceptionally cheery chap, who was also a bit of an insomniac and who liked to spend an hour or two chatting to the Third Mate (me) on the midnight watch. He was a fund of gruesome stories about corpses he had encountered in his career, which gave me nightmares when I turned in at 0400. Nowadays, alas, all the travelling doctors will go by air, and the poor old Second Mate is left to cure the sick and the lame.