FEATURE | Car carriers on the up despite rising uncertainty

Written by Baird Maritime on October 30, 2018. Posted in PCTC World.

Car carrier shipping is expected to continue its recovery from the trough of 2016, supported by improving utilisation, according to Drewry.

However, increasing localisation and the threat of trade wars will slow finished vehicle cargo growth, while carrier operational efficiency will be challenged by the emergence of new trades and ports of call.

Seaborne trade in finished vehicles has recovered strongly from a low in 2016, recording growth of approaching six per cent in 2017 to 37.5 million CEU. Meanwhile, growth in the specialist car carrier fleet has stagnated, forcing idle ships back into employment, and is expected to remain so with the orderbook at an historic low. This will support rising utilisation and stronger freight rates over the next five years, but with vessels barely breaking even this will not be sufficient to encourage further investment in the sector. 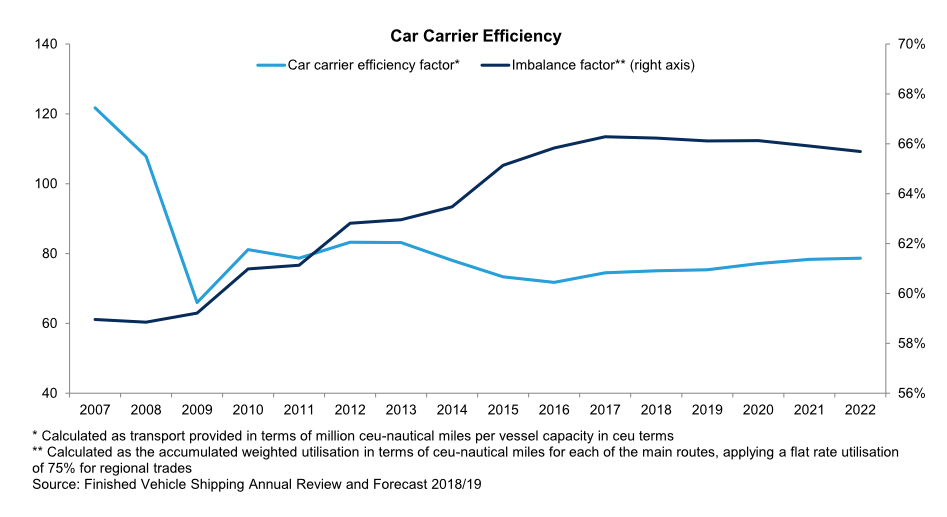 “Despite improving utilisation and a record low orderbook, owners and operators are holding off acquiring capacity, whether through ordering, sales and purchase or chartered in tonnage, as trade uncertainty weighs on the market,” said Tom Ossieur, Head of Car Carriers at Drewry.

Just four car carriers were ordered during the first half of 2018 while chartering activity remains focused on short term contracts.

The recent recovery in finished vehicle trade is being challenged by the threat of higher auto trade tariffs, increasing localisation of production as well as a shift in car sales growth from mature to more volatile emerging markets.

These developments mean shorter shipping distances and more frequent and lengthier port calls, often to less efficient terminals, which will lower vessel operational efficiency (see above). Meanwhile, higher bunker costs and the impending low sulphur fuel regulations that come into force in 2020 will add to costs. These are headwinds to the recovery in profitability of both owners and vessel operators.

“Overall, car carrier efficiency has fallen by 39 per cent since 2007 as vessels sail at slower speeds and spend more time in ports,” said Ossieur. “Drewry does not foresee significant improvements forthcoming. Lower speeds, shorter routes and trade lane imbalances are here to stay.”

Still, slow supply growth will provide support to the supply-demand balance, with car carrier utilisation forecast to reach 86 per cent by 2022. But market uncertainty and downside risks will continue to weigh on chartering activity, charter periods and time charter rates.

Increased focus on High & Heavy as well as breakbulk and project cargo is providing some relief, with operators ordering more flexible vessel designs in recent years. But some are shunning fleet additions in favour of port and landside logistics investments that offer better returns. The emergence of new ports has boosted demand for transhipment and as a result, vehicle port volumes increased by over eight per cent in 2017.