Following an almost total halt in exports of soya beans to China in the last quarter of 2018, the new year has brought new hopes for American farmers and the dry bulk shipping sector. The USDA reported that in the first four weeks of 2019 754,609 tonnes of soya beans were ready to be shipped in China, up from only 25,347 tonnes in December.

In addition to the ready shipments, on February 5 and 6, the USDA reported sales totalling 3.2 million tonnes of soya beans to China, the majority of which is to be delivered between now and September 1, 2019, the start of the next marketing year.

At the beginning of December 2018, the US and China agreed to delay planned tariff hikes to allow for a period of negotiation with the aim of ending the trade war. As part of this China allegedly promised to resume its purchases of US soya beans, and during the latest round of talks, China offered to buy 5.0 million tonnes.

“Political promises are beginning to materialise in a trade that has faced huge uncertainty since the start of the trade war. This is good news for the struggling dry bulk market as it generates a much-needed increase in tonne-mile demand,” said Peter Sand, BIMCO’s Chief Shipping Analyst.

“The ongoing negotiations between the US and China are now approaching the March 2 deadline at which point either some tariffs will rise, the ceasefire will be prolonged, or tariffs will be removed. Only the last option would allow US soya beans to be able to compete with the Brazilian soya beans expected to arrive in the market in a few weeks.

“In a politically unstable environment, uncertainty for the future of this trade remains high and US farmers therefore face difficult decisions as to what to plant for next season.”

Chinese imports of US soya beans had all but ground to a halt in Q4 2018 following the implementation of 25 per cent tariffs on soya bean imports from the US in July 2018. The US exported 98.2 per cent fewer soya beans to China in the first seventeen weeks of the 2018/2019 marketing season, which started on September 1, 2018, compared to the same period of the last season.

As of January 31, 2019, the USDA reported inspections of 21.5 million tonnes of soya beans for export in the 2018/19 marketing year, down from 34.7 million tonnes in the same period of the last marketing year. This represents a loss of 13.3 million tonnes, or 177 Panamax loads (75,000 tonnes), and shows how important the Chinese market is for US soya bean exporters.

Total Chinese imports of soya beans in 2018 were down 7.9 per cent from 2017. Reduced soy meal content in pig feed and using previously built up stocks, as well as increasing imports from other countries, allowed China to avoid US soya beans and the 25 per cent tariffs. 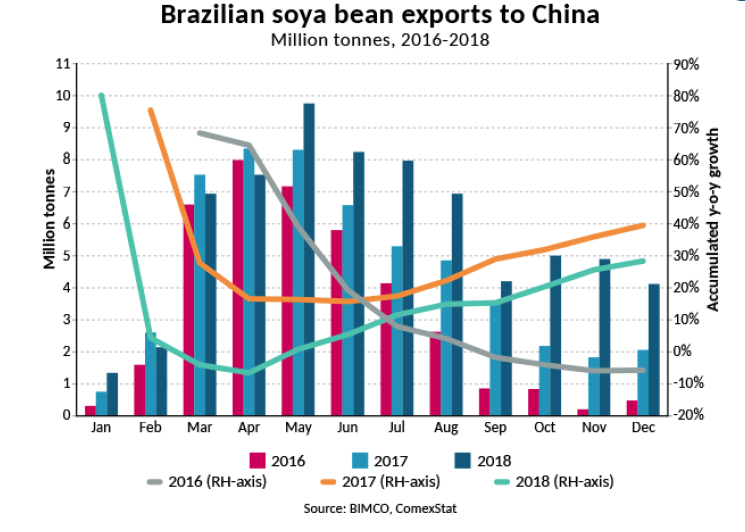 Brazil is the largest exporter of soya beans to China and in 2018 met much of the extra Chinese demand for non-US soya beans. Its total exports to China were 28.4 per cent higher than those in 2017. Much of this came from an increase in exports in Q4 2018. The last three months of the year are usually peak time for US soya bean exports, with lower exports from Brazil as its exporting season runs from February to August. In Q4 2018 Brazil exported 13.9 million tonnes of soya beans to China, over two times as much as the 6.1 million tonnes in Q4 2017.

“We expect to see soya beans from Brazil on the market earlier than usual this year, beginning in the second half of February. These soya beans will compete with those from the US, with sellers likely to continue exporting through their off-season,” Sand said.