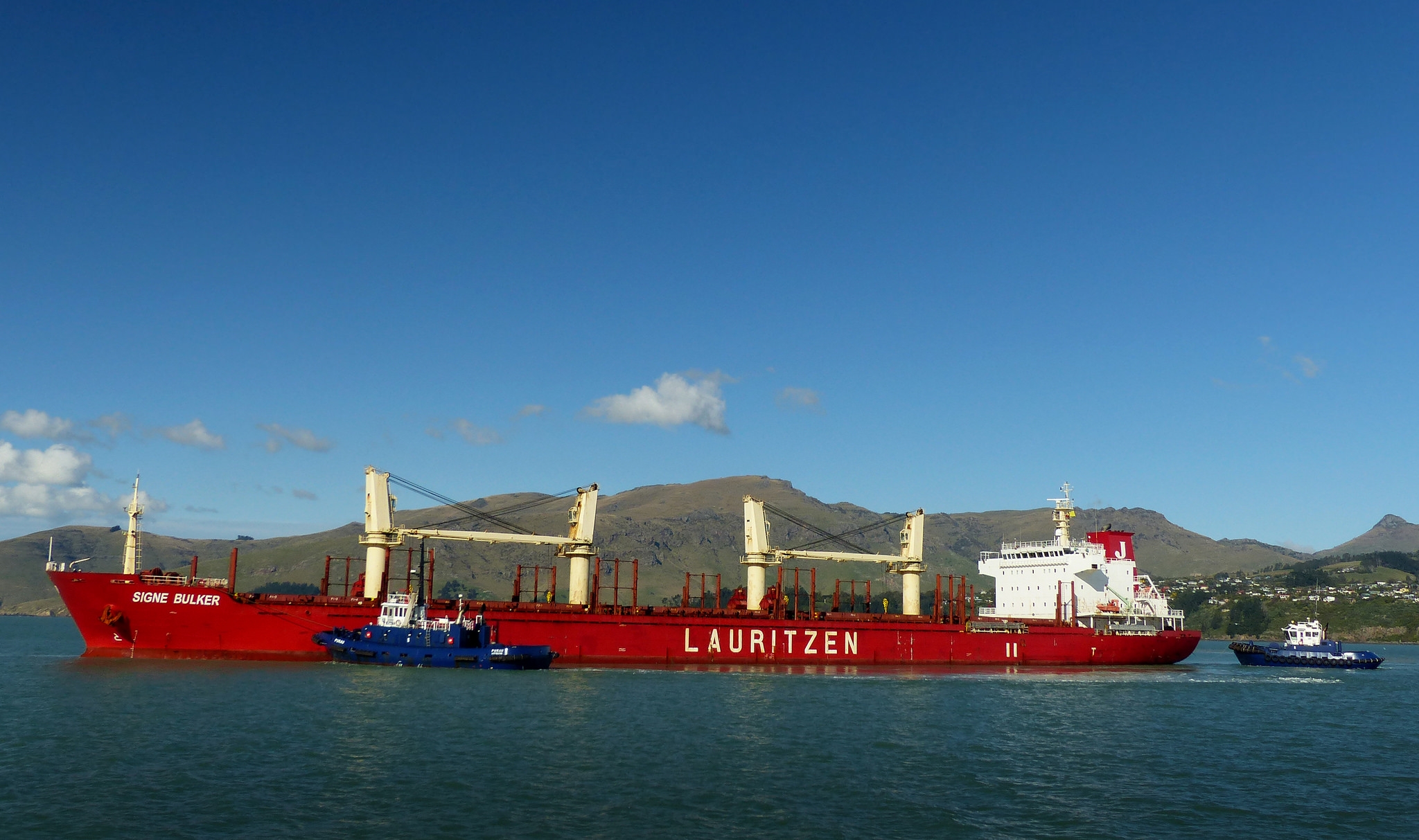 Since early July, capesize rates have gone up and up. By mid-August, they had reached a breakeven level to become profitable. BIMCO estimates that a capesize ship on average fleet financing and operational cost levels, turns profitable when rates are above US$15,300 per day. 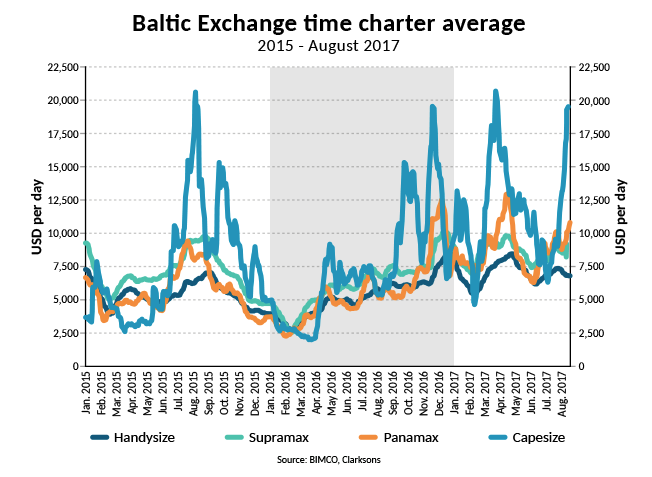 But the improvements are unfortunately not seen in any of the other segments. This reflects the development in cargo demand, and highlights the fact that overcapacity remains a challenge.

Iron ore and coal volume growth have both been very high, driven by China. Domestic steel mill margins have risen throughout the first half of the year, ensuring that steel mills are keen to keep up production, and higher steel production means a healthy demand for coking coal too. This happens even with lower steel exports out of China, which is hampered by trade restrictions set up by importers.

As Chinese electricity demand this year is higher than ever, coal-fired power-plants are bridging the gap. This benefits dry bulk shipping, but watch out for coal prices delivered in northern parts of China. If they go high (above 630 yuan per ton), the authorities tend to intervene and increase domestic production. A pick up in hydropower production would influence demand for thermal coal imports negatively.

As BIMCO reported on August 9, China has sourced coal all the way from the US East Coast, with a sailing time of 45 days. This adds a lot of tonne-miles to panamax and capesize demand.

Demand for thermal coal has grown solidly across Asia, with Taiwan and South Korea leading the pack. The only exception is India which is using more and more domestically mined thermal coal, importing less for the third year in a row.

Beyond coal and iron ore, demand growth has been seen across the board. Soybeans set a quarterly all-time high for Q2 and grains are expected to have a strong Q3.

With improving shipping markets comes faster deliveries of ships from global shipyards. BIMCO sees this in all the main shipping segments that we analyse.

This is to put it simply, how participants in the shipping industry and associated industries react, and is the reason why BIMCO reiterates the view that market recovery will be slower than many would hope. This is because improved demand is always followed by reduced focus on handling the supply side challenges. This means less idling and demolition as well as shorter/fewer postponements of deliveries.

BIMCO expects 40 million DWT to be delivered in 2017, offset by 19 million DWT of demolished capacity. Year-to-date, 30 million DWT has been supplied while nine million DWT has left the fleet. We know that a higher BDI often means less demolition, but as the BDI has been lifted solely by the capesizes in recent months, our estimates for supply side changes remain unaltered. The fleet is estimated to grow by 2.7 per cent. 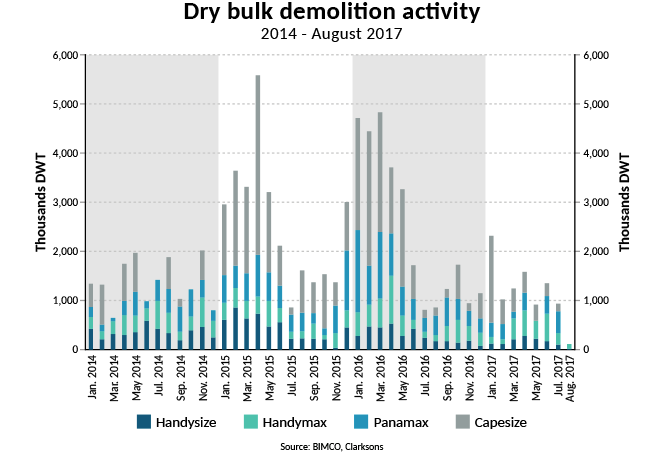 Should demolition fall short by five million DWT, fleet growth will jump to 3.4 per cent. For the recovery to stay on track, the supply side must be handled extremely carefully as the demand growth is expected to be around 3.5 per cent.

The supply side is made up of three elements: deliveries, demolition and newbuild orders. Thus, with faster deliveries and slower demolitions, it is worrying to note that, what we expected to happen in relation to new orders is now taking place too.

Orders for 9.6 million DWT have been placed, with panamax being the popular choice. In the wake of hectic activity in the sales and purchase market during the first four months of the year, second-hand prices went up and back in sync with newbuild prices. This made the ordering of newbuild an attractive alternative again, with April, May and June being particularly busy in this respect. Still, the order book currently stands at 60.4 million DWT, which is the lowest in 13 years. 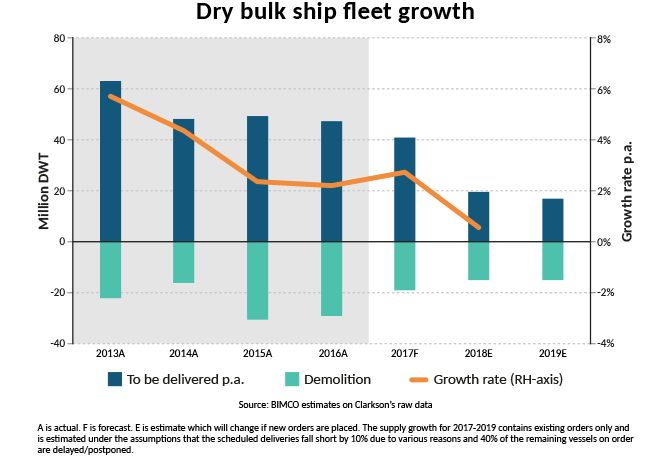 The growth of the dry bulk fleet differs significantly in level and pace from handysize to capesize. Handysize fleet growth over the past year has been fairly steady at 2.1 per cent. It has remained constant for handymax/supramax too but at a level of 5.3 per cent. In between, both the panamax and capesize segments have grown at an increasing pace and to higher levels since their recent low-points in 2016.

In addition to the Chinese import ban on coal from North Korea – established earlier in the year in accordance with UN sanctions on North Korea in response to its nuclear and missile activities – China has also banned imports of iron ore. Seaborne shipping has seen no effect from the earlier ban, as China has not bought anthracite coal from any other suppliers. As the amount of iron ore imported from North Korea is only a fraction of coal imports, this will not be felt in the market either.

It is comforting that the demand growth this year has been broad, in terms of commodities and importing nations. Nevertheless, China is still the importer that matters but China is changing. Difficult to see if you only watch the dry bulk market, but several macroeconomic indicators point towards developments that may result in lower investments. Amongst them are fixed asset investments (FAI), such as machinery, infrastructure and housing projects, which are huge drivers of dry bulk imports. Data points to lower and lower growth rates for both public and private investments. It remains to be seen to what extent the Belt and Road Initiative will counter this development positively.

For decades China has been an all-out growth story. But could China stall again, with potentially severe consequences for the dry bulk industry? Not long ago, China cut its import levels compared to a year earlier, for four quarters in a row, from Q3-2014 to Q2-2015. The result was a drop in BDI from 1,500 to 500 from early November to late February. Going forward, we must be aware that it could happen again.