FEATURE | Iran number one buyer of US soya beans in August

Iran has emerged as the primary buyer buyer of US soya beans in August, while exports of soya beans to China from the US are down 31 per cent for the first eight months and 95 per cent in August alone, compared to the same periods of last year.

The US soya bean export season is on its way. October through to January is peak season for US exports of this key agriculture commodity – which in 2018 attracts much more attention than previously. In terms of seaborne tonnes of soya beans, 31.7 million tonnes were shipped from the US gulf and US North West coast to buyers in China in 2017.

There were only four months between January 2016 through to July 2018, that the US exported no more than one 82,000 DWT Panamax dry bulk cargo to Iran. In August 2018, 414,000 tonnes, the equivalent of five Panamax loads of soya beans were shipped to Iran – this amounts to 13.2 per cent of total US soya bean exports in August.

“BIMCO anticipated trade lanes to change due to the ongoing trade war between China and the US. But it’s fair to say that Iran’s massive and sudden appetite for US soya beans is very unexcepted and the reason is currently unknown,” commented BIMCO’s Chief Shipping Analyst Peter Sand.

“From a shipping perspective it’s vital to have continued exports sent to far away destinations, deploying the many ships in position right now to cater for the seaborne transportation demand.” 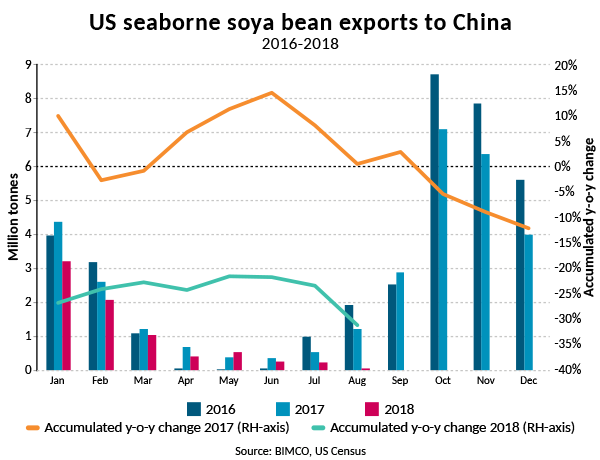 In August, only 67,000 tonnes of soya beans have been shipped from the US to China. This is a reduction of 95 per cent from the 1.2 million tonnes being shipped in August last year.

“The Chinese appetite for US soya beans has been muted all year, in absolute as well as relative terms,” added Sand.

“If this is the result of Chinese farmers changing the diet of their pigs from a much higher soya meal content than the global average to a normalised and lower one, to reduce US imports, they may not need to find a replacement producer. A full replacement that may also be very difficult to find.”

As the Brazilian soya bean export season is soon ending (Oct/Nov), it’s fair to conclude that Brazilian exports have not filled the gap fully – as the US exported 31.7 million tonnes to China in 2017.

As many long-haul fixtures are lost on the way when Chinese imports of soya beans from the Atlantic basin drops, the dry bulk shipping industry feels the pain.

Total US seaborne soya bean exports up by 9.7 per cent in the off season

It has been Egypt and the Netherlands who have grown their imports the most so far. But also Pakistan, Taiwan, Vietnam, Spain and Iran have increased imports of US soya beans. In total, they have contributed to more than balancing out the 3.5 million decrease in Chinese imports in the first eight months of 2018 compared to the same period in 2017.

“Going into the final four months of the year (peak US export season), a period that saw China taking 20.3 million tonnes out of the total 28.5 million tonnes last year, it will be increasingly difficult for US exporters to counterbalance lower Chinese imports with new buyers,” said Sand.