FEATURE: Cautious optimism remains the name of the game for multipurpose shipping 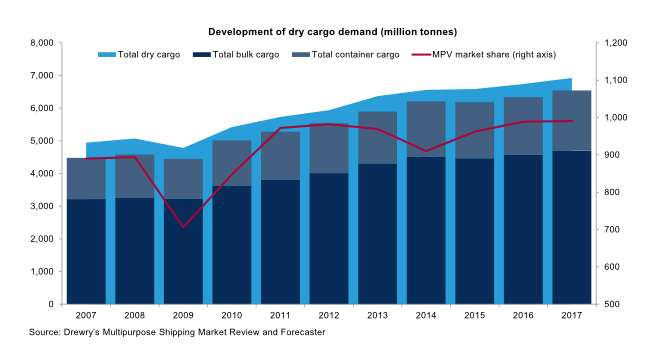 Although China’s plans to curb steel production in an attempt to clean-up the air pollution blighting its cities may well slow steel exports over the short term, the longer term outlook is still positive for the multipurpose and heavy lift sector. The clean-up campaign has resulted in a decision to cut some 50 million tonnes of steel production from Q4 2017. Drewry expects that Chinese exports will become less competitive for their South East Asian customers, compared to the Middle East or Turkey, and trade volumes will shift accordingly.

Meanwhile, there are also signs that the longer term health of the competing sectors is improving. Freight rate forecasts for both the container and Handybulk carrier sector are showing upward movement in 2017 and 2018. This has already led one container line to announce that it is less interested in project cargo than previously, due to the extra time needed to stow this type of cargo.

Although there is still a significant level of overage tonnage in the multipurpose fleet, the majority of newbuilding deliveries over the last five years have been heavylift capable. This modern fleet of project carriers is well placed to take advantage of an upturn in this sector.

“The improvements in many other key drivers for this market mean we remain optimistic about its future. The expectations for global GDP, coupled with those for global PMI and the rising oil price, are likely to lead to improved investment and therefore increased demand for breakbulk and project cargo,” commented Susan Oatway, lead analyst for multipurpose shipping at Drewry.