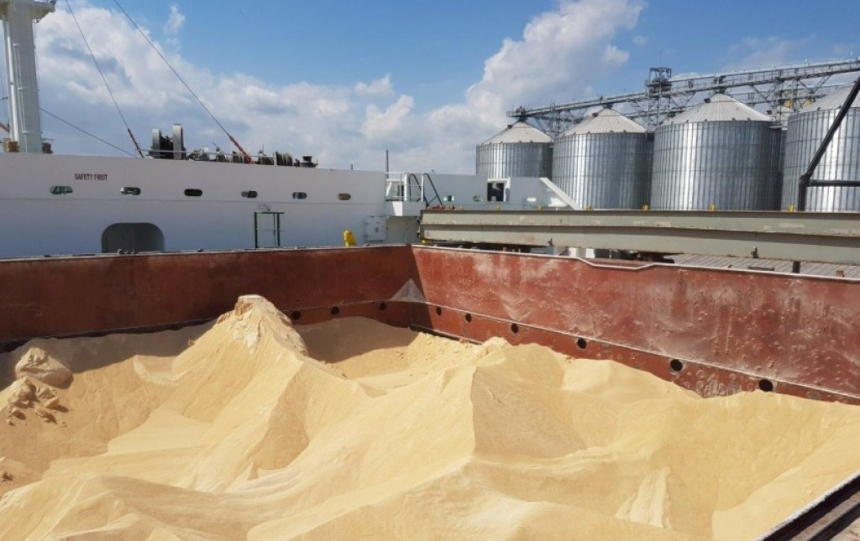 As agricultural dry bulk commodities exports took a dive in the first quarter of this year and painted a gloomy picture for Panamax and Handymax freight rates, a stunning second quarter comeback have nearly tripled freight rates.

While total agricultural export volumes are now solidly up in the first half of the year, they are not mind-blowingly high,and export volumes in the first quarter of 2020 certainly offered little help. A significant rise in demand for shipping and a boost in exports in April, May and June on the other hand, has saved the day for Panamax and Handymax freight rates. So much so that freight rates have jumped from US$5,000 per day to US$10,000-13,000 per day by August 26. The rates bottomed out in mid-May and have been supported by South American grain exports heading into Asia since then.

Exports grew by 22 per cent year-on-year in Q2

Combined agricultural export volumes from the US, Argentina and Brazil rose to 148.6 million tonnes in the first half of 2020, from 136.8 million tonnes in the first six months of 2019. The rise was fuelled by strong Brazilian soya bean exports which drove total agricultural exports out of Brazil up by 40 per cent in the second quarter compared with the same period last year.

This stunning comeback in Q2 replaces weak exports in Q1, which were hit by a 15 per cent drop in US exports, primarily as a result of declining soya bean exports. The first quarter saw this high-volume commodity falling the most, as exports were 2.4 million tonnes (-20 per cent) lower this year than in the first three months of 2019.

US coarse grains and wheat exports fell by 13 per cent and 11 per cent respectively, losing a combined two million tonnes. As total exports declined by 4.4 million tonnes, 59 Panamax loads (75,000 tonnes) were lost.

“As the Covid-19 pandemic took hold, it was clear that seaborne exports of agriculture bulks were this year’s wild card, the one that could grow, whereas the rest of the commodities were bound to fall,” says Peter Sand, BIMCO’s Chief Shipping Analyst and continues: 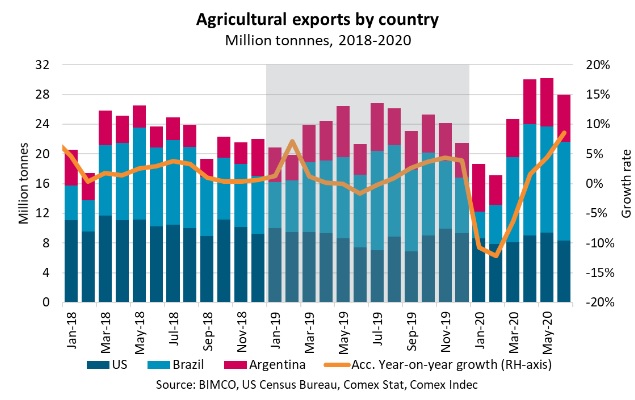 “As the main exporters in the western hemisphere were able to ship 22 per cent more agricultural goods in Q2 this year than in the previous quarter, much of it long-haul, charterers ran down tonnage lists and drove up freight rates.”

“If exports of soya beans and corn from the US are strong from the beginning of the new marketing year, we will get for a healthy support to the dry bulk market from September 1,” Sand says.

US agricultural exports move towards corn

Looking at the three large exporters of agricultural dry bulks in the Western Hemisphere – Brazil, US and Argentina – a notable change was noticed in terms of the type of commodity exported by the US and when.

Mirroring the general picture, Q1 of 2020 was marked by slow exports from the US to Asia. During Q2 however, 6.4 million tonnes of corn were exported, a 24 per cent rise from the first three months of the year. 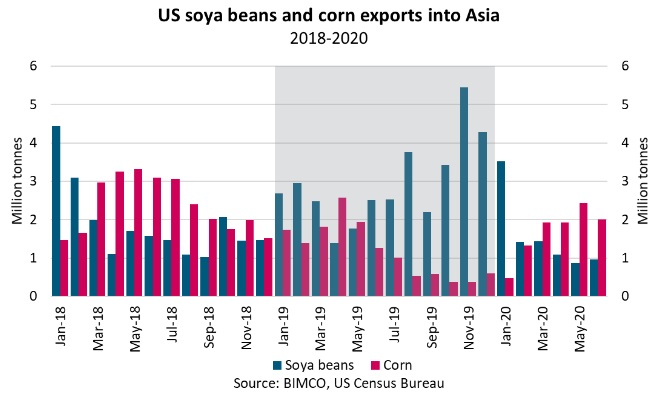 The other major agricultural exporters, Brazil and Argentina, have not seen significant changes in terms of the split between commodities exported. Soya beans continue to dominate Brazil’s agricultural exports, while in Argentina, coarse grains maintain the largest share of the total volumes.

Despite the solid January volumes, soya beans took only a 29 per cent share of total agricultural exports out of the US in the first half of 2020.

Soya bean volumes have seen a plain drop, particularly in the second part of Q2,which was exacerbated by the deteriorating geopolitical environment. However, in addition to this, low volumes can be attributed to seasonality, as the marketing year for soya beans ends on August 31.

The geopolitical conditions clearly paved the way for Brazil to take the lead, exporting 37.6 million tonnes of soya beans in the second quarter of 2020.

“As the North American agricultural exports season is about to kick in, all eyes will be on US exports of soya beans from day one,” according to Sand.