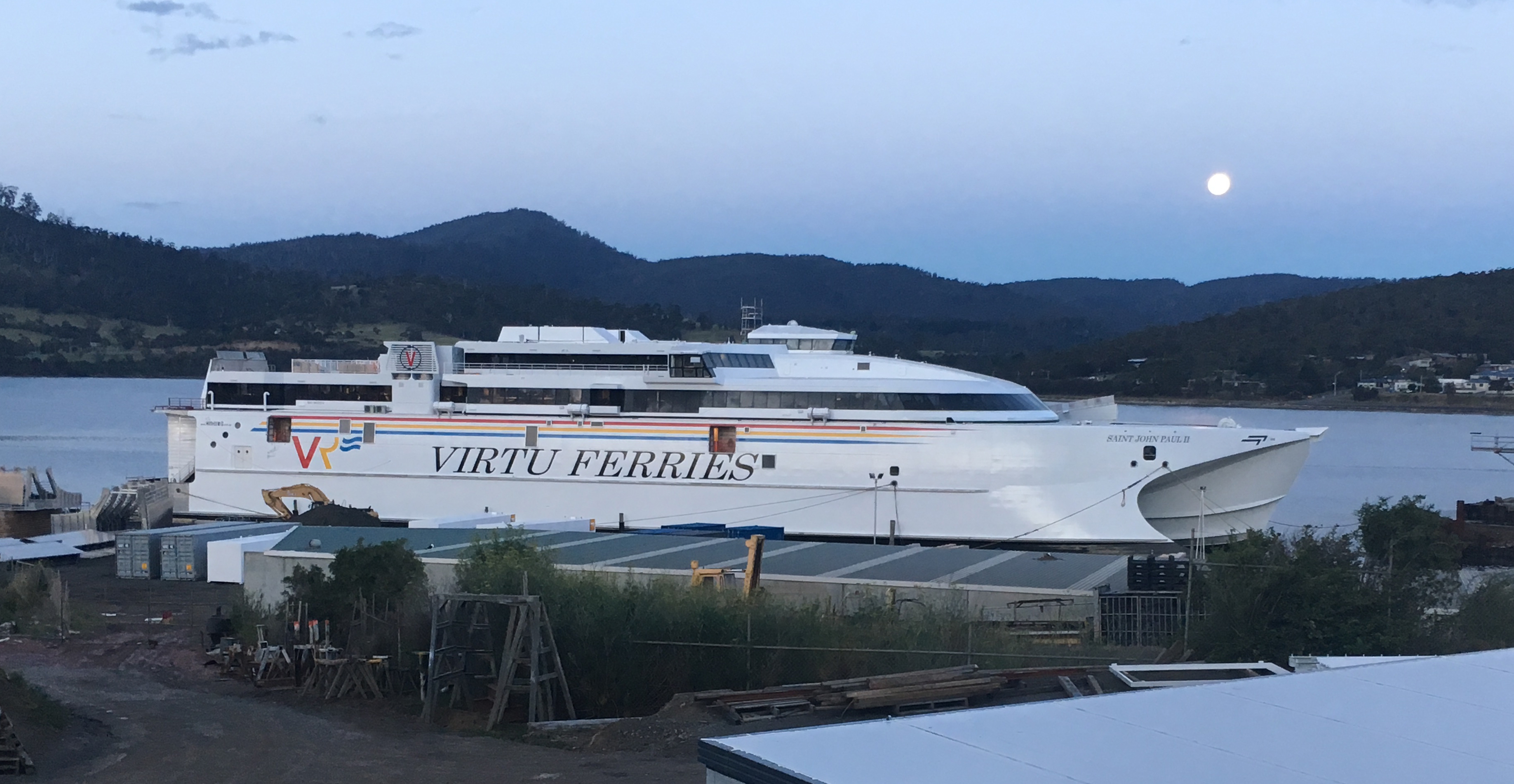 I write this just before Christmas but I certainly won’t be the first to be celebrating, with the large fast ferry construction community no doubt thinking virtually all their Christmases have come at once.

Those with memories longer than Santa’s beard may remember that in the mid-1990s there was frenetic ordering and building of large fast craft, which at the time were the new “must have” for many operators.

Like yo-yos and hula hoops, however, the fad burned hard and fast but then found the bust to offset the boom. It got progressively quieter with not more than a hand needed to count annual global deliveries. Well, now it is time to put the second hand into use because there has certainly been a flurry of activity in the last couple of years. As of December, the confirmed orders in the marketplace went something like this:

NIDCO is also expected to confirm an order for another large wavepiercing catamaran to be built in Australia, and there is talk that another 100+ metre ferry may also be ordered in the not too distant future.

There have also been whispers about a 130-metre, 2,100-passenger, 235-car monster fast craft to be built and delivered by the end of 2020. Rumour has it that the fuel type starts with L, the owner with B, and the yard with I.

Certainly good times for the supply side assuming, of course, that all this is being done profitably. That’s far from certain, with talk of “tight margins” on some projects.

Perhaps sharper pencils on the pricing is helping to fuel demand, or perhaps it is fuel itself – with cheaper, high sulphur fuels on the way out a factor favouring the more conventional Ro-Paxes with medium speed diesels goes by the way side.

Of course, LNG has also come into play there, but the reality is that not everyone can easily access LNG, particularly in the quantities required to go fast. Balearia has gone gas for its 125-metre project, and is also converting some of its existing fast craft (with a bit of financial help from the EU). To the best of my knowledge, though, it’s only Buquebus in South America already running an LNG fast craft. Rumour has it at least one Greek operator also plans to invest but has been delayed through not obtaining EU largesse.

It will certainly be interesting to see how these project transpire over the next couple of years and, indeed, if this is a bubble or a more sustained boom.

Less happy times for those in the marine publishing industry (present company excepted) with news back in October that venerable (and evidently vulnerable) title Fairplay ceasing publication after some 135 years.

When you have been bringing news to an industry for that long – to put it in perspective radio didn’t exist when the first copy rolled off the press – you would think it was down to a fine art. Clearly, however, it wasn’t a profitable enough one at least for the title’s current corporate owners.

When you are in my position, it’s things like this (though also my age) that make one ponder if extinction is nigh.

Personally I don’t think so. Being inclined towards the views of Darwin, it seems to me that it is just an opportunity to evolve. Indeed I had assumed that is what would happen with Fairplay – an evolution from printed page to a purely digital presence. So I was shocked to read that even the website and electronic news services have gone by the way side, with its last stories uploaded late in November.

So it will certainly be interesting to see how this website transpires over the next couple of years and, indeed, if the Fairplay-type scenario is a bump or a more sustained bust. I’d certainly be interested to know how you readers out there would prefer to receive the various types of news you seek. Surely you won’t be happy with #fakenews?

Something that comes around almost as inevitably, and frequently, as Christmas is finger-pointing about illegal state aid to the shipbuilding industry. Most recently Japan’s gaze has been towards South Korea, with a formal complaint apparently lodged with the World Trade Organisation.

Speaking broadly rather than specifically since I have no knowledge about this latest alleged instance I subscribe to the “no smoke without fire” principle, and am a fairly firm believer that all manner of schemes are used by governments to aid their shipbuilding industries.

How anyone expects to police it all is beyond me, but I guess there is good reason to at least try to eliminate the most blatant abuses of free and fair trade principles.

To think that all the various methods available to governments to keep the local population and economy happy through trade distortion will ever be evened out, though, is real pie in the sky stuff. My advice: don’t waste too much energy on it, just try to eat as much of the pie as you can possible get.