Written by Baird Maritime on October 19, 2018. Posted in Boxship World. 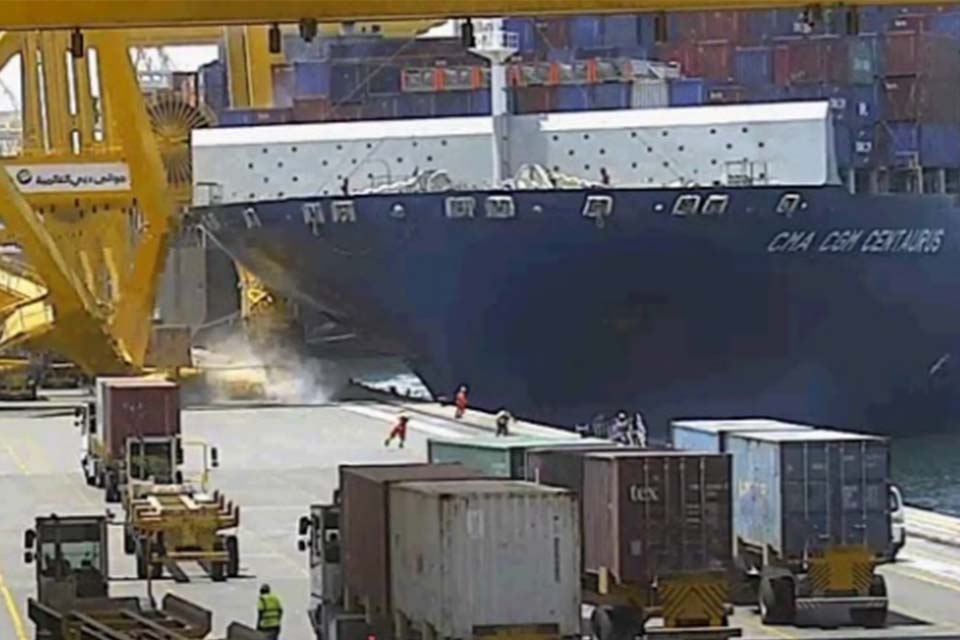 The UK’s Marine Accident Investigation Branch (MAIB) has released its report on the heavy contact with the quay and two shore cranes by the containership CMA CGM Centaurus during its arrival under pilotage at Jebel Ali, United Arab Emirates.

The accident, which occurred at 11:37 local time on May 4, 2017, resulted in the collapse of a shore crane and 10 injuries, including one serious injury, to shore personnel.

The accident occurred because the ship was unable to attain a sufficiently high rate of turn into a basin in preparation for berthing, the MAIB report stated.

The pilot was unaware of the ship’s speed, and the ship’s bridge team were uncertain of the maximum speed required to complete the turn safely.

There was no agreed plan for the intended manoeuvre, and therefore no shared mental model between the bridge team and the pilot. Consequently, the pilot was operating in isolation without the support of the bridge team, allowing the pilot’s decision-making to become a single system point of failure.

The pilot’s performance was focused on efficiency, which influenced his decision to turn the ship into the basin without ensuring that the manoeuvre was conducted at a sufficiently slow speed to enable its safe completion.

The report further states that many of the factors in the accident can be attributed to a focus on completing acts of pilotage as quickly as possible.