Written by Baird Maritime on September 19, 2017. Posted in Boxship World.

Contract freight rates paid by beneficial cargo owners (BCOs) to move their products by container have increased for a fourth consecutive quarter, according to actual contract rate data from the Drewry Benchmarking Club. 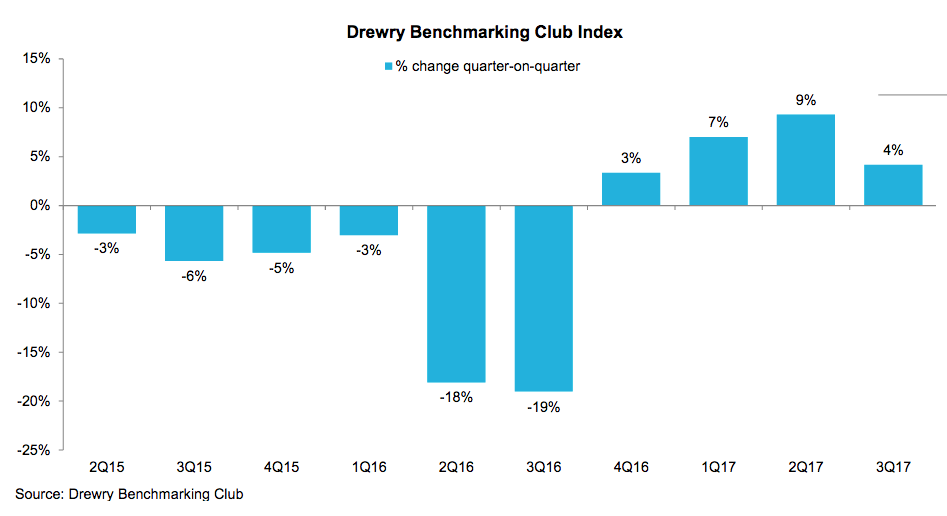 Average contract rates on two major container trade routes – from Asia to North Europe and North America – have increased by another four per cent between the second and the third quarter of this year. This means that the latest Drewry Benchmarking Club Contract Index has increased by 39 per centin the year to the third quarter, based on $2 billion of ocean freight spending.

“The container shipping market has seen a sustained, radical reversal away from the previous, long deflationary trend,” said Philip Damas, Head of Drewry’s logistics practice. “Not only are freight costs increasing, but rapid consolidation in the supplier base, changes in supplier behaviour and new developments in tender technology will bring real change and uncertainty to the ocean transport procurement environment,” he added.

Drewry reiterated its previous warning to BCOs that they need to re-think their contract negotiation strategy and that, by incorporating benchmarking and e-sourcing best practices such as eSOFSTM in their tender management process, they can mitigate rate increases.