FEATURE | Why should I pay any attention to spot container freight rates? 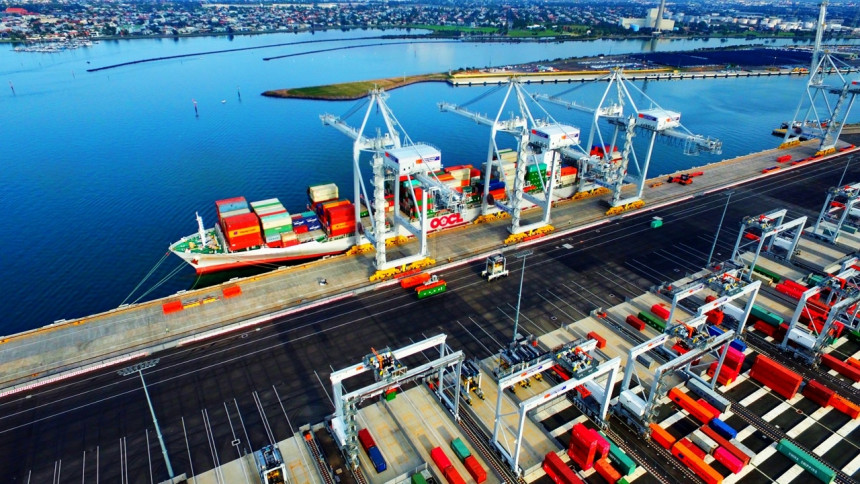 Over the past two years, the container shipping industry has faced several challenges, many of which were felt on the Far East to US West Coast (USWC) route. This route has taken the biggest direct hit from the trade war that started in 2018 and which, despite the signing of the Phase One Agreement between the US and China, is not over yet. Adding to the trade war headaches were higher fuel costs due to the IMO 2020 Sulphur regulation that came into effect on January 1, and now, the coronavirus is causing volumes to drop.

Despite lower volumes being fixed in the spot market, it is key to tracking developments in the container shipping market, as it quickly responds to the changing situation and adjustments to demand and supply. On the other hand, the longer-term contract rates are key to understanding where profits in the liner industry are being generated.

“The long-term contract rates generate the most money for carriers, but their stability hides the volatility that the market is facing. The trends in the spot market are a much better reflection of the market conditions globally, as well as on individual trade lanes, and can therefore offer important input into the decision making processes,” said Peter Sand, BIMCO’s Chief Shipping Analyst.

The volatile spot market; a better indicator than the more stable long-term contracts The long-term contract rates have been very stable since the start of 2018 when they stood at US$802 per forty-foot equivalent unit (FEU). They remained around that level until May 2019 when they rose to US$974 per FEU and have since then been slowly creeping upwards to US$1,083 per FEU on April 21, 2020 (source: Xeneta). 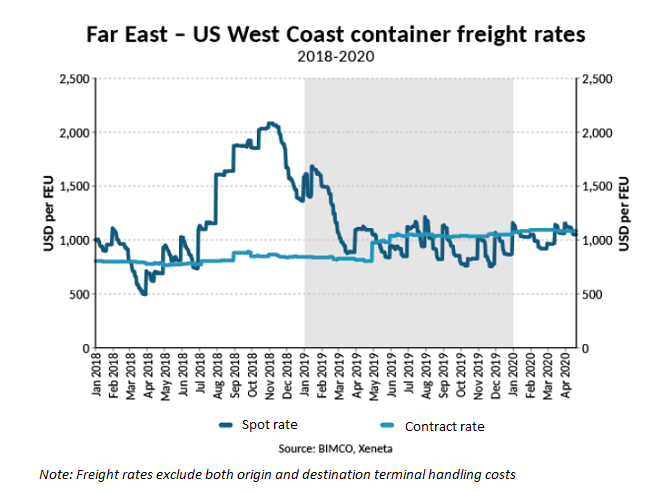 In the same period, the spot rates have given a better indication of what the container shipping market experienced. Here, the effects of frontloading towards the end of 2019, ahead of a tariff hike on US imports of goods from China, are clearly visible with rates quickly rising from US$735 per FEU at the end of June 2018 to US$2,066 per FEU in mid-November. As usual in the in the gap between the calendar new year and the Lunar New Year, spot rates remained elevated until the first quarter of 2019, after which volumes and rates fell as the stockpiling rush ended.

The much talked about IMO2020-adjusted Bunker Adjustment Factors (BAFs) did little to lift freight rates on the Far East to US West Coast route as bunker prices rose in response to the January 1, 2020 implementation of the IMO Global Sulphur Cap. Carriers that managed to implement BAFs mainly did so by lowering the basic freight rate.

It is particularly clear on long term rates that the total cost of sending a container from the Far East to the USWC did not increase in response to the new environmental regulation. Short term freight rates experienced a small hike as we entered the new year: going from US$870 per FEU on December 31, 2019 to US$1,159 per FEU on January 1, 2020.

However, this was not enough to cover the additional fuel costs at that time, and in fact represents (mostly) normal seasonality with rates rising at the start of the new year, as more goods are shipped ahead of the lull in production in the far-eastern manufacturing hubs over the Lunar New Year.

“The overcapacity that is rife in the market limits carrier’s ability to pass on their additional fuel costs linked to compliance with the Sulphur Cap. Although the bunker fuel price spread, between high- and low-sulphur marine fuels, has narrowed considerably since the start of the year, this power imbalance between carriers and shippers continues to hinder higher rates,” Sand said.

Coronavirus has had little effect on freight rates, hiding the real story

Both long- and short-term rates have remained stable even as the coronavirus pandemic has forced large parts of the global economy to shut down and thereby lower demand for container shipping. Freight rates have been largely unaffected due to the many sailings that carriers have blanked, resulting in large scale capacity reductions on many of the world’s major container trades.

Carriers have chosen a range of measures to lower capacity, including the idling of ships, and blanking of sailings, which has driven the idle containership fleet to record highs in the past few months. On top of this, some carriers have chosen to slow down their ships or avoid expensive canal tolls. A few containerships have chosen the longer route around the Cape of Good Hope in South Africa, rather than the shorter and more expensive route through the Suez Canal. The falling oil price has resulted in lower bunker fuel prices, lowering the cost of sailing the longer distance to below that of the Canal tolls.

These measures also reduce the available capacity and artificially hold up freight rates.

“While the cost of freight per container has remained stable, the lower volumes and fewer sailings mean that although carriers can reduce some losses by blanking sailings, the disastrous effect that the coronavirus is having on their bottom lines is masked by the stable freight rates for the time being,” added Sand.