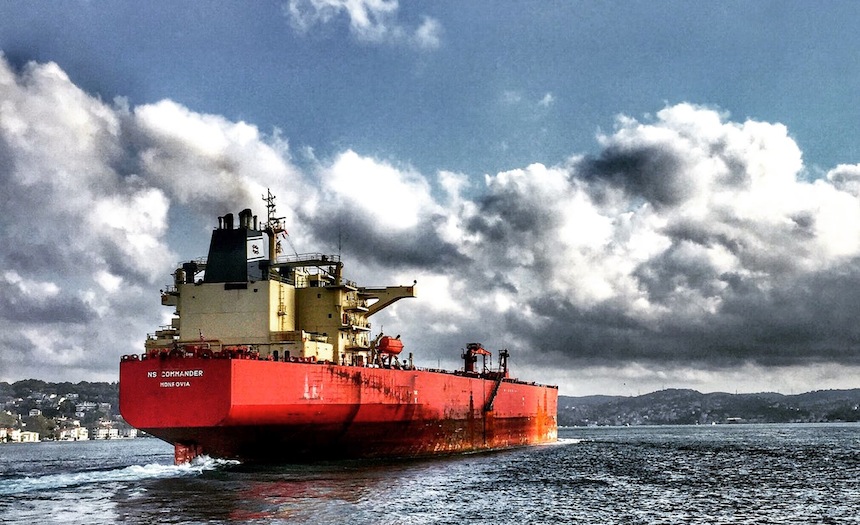 Even before the effects of the coronavirus, the “Phase One” agreement between China and the US failed to boost volumes of the implicated goods in January. In fact, exports of the manufactured, agricultural and energy goods included in the deal were down 26 per cent from January 2017, which serves as the base year for the agreement.

The “Phase One” agreement which was signed on January 15, 2020 lowered some US tariffs on imports from China, which in return has committed to increase its imports from the US. The widely discussed US$200 billion deal is divided over two years and across four sectors: manufacturing, agriculture, energy and services. Exports of these goods from the US to China are set to rise by US$200 billion compared with levels in 2017.

“The Phase One agreement brought some relief to the shipping market as a further deterioration of the relationship between the US and China was avoided,” said Peter Sand, BIMCO’s Chief Shipping Analyst.

“For the extra volumes to be met, exports in January needed to show strong growth. This failed to happen. In fact with the fall in volumes, January represented a backwards step from the starting line, rather than a strong start to the year, meaning even more ground has to be covered in the remaining months of the year,” Sand said. 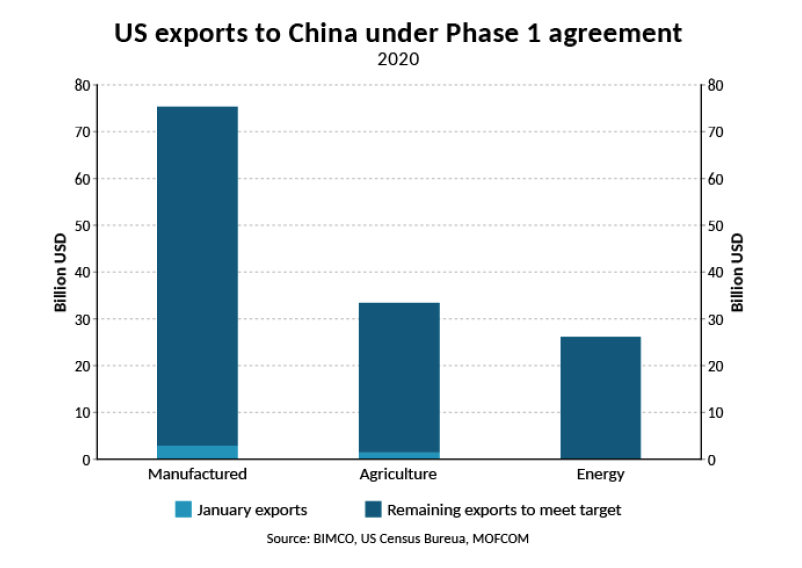 With only a year to meet growth targets of this magnitude, every month counts and strong growth is needed right from the start of the year and in this respect, January has disappointed. In particular, energy imports fell dramatically to just US$25.7 million, less than 0.1 per cent of the US$26.1 billion commitment from China for the full year, and just under half of exports in January 2017, the level which has to be consistently beaten by quite a margin in every month this year.

January has disappointed; strong growth is needed from the get go

US exports of the manufactured and agricultural goods under the deal showed a smaller reduction in January 2020 compared to January 2017 than the energy exports, but still a decline of 1.6 per cent and 43.3 per cent respectively. Exports in January for both of these categories of goods were around four per cent of the total exports needed if the commitments are to be met.

The low exports in January cannot be attributed to the coronavirus outbreak, as this had only a very limited impact on the Chinese economy in January and no effect on its trade with the US. The virus has however plagued exports in February, and will continue to do so in the coming months, even as China slowly returns to work.

In reality, this means that exports in the first quarter of the year are unlikely to deliver any growth, let alone the high rates needed to meet the commitments in the agreement. It is highly unlikely that the next three quarters of the year will see exports on track to meet the target, let alone to make up for missing volumes in the first quarter.

Agricultural goods, such as soya beans, need to be planted in the coming months, with soya bean farmers in the US now facing the decision of what to plant for the coming harvest. Having been burnt several times before over the course of the trade war, their willingness to plant the huge volumes needed to meet the potential additional demand remains questionable.

Furthermore, the sudden drop in the oil price following the breakup of the OPEC+ alliance means that volume growth in the energy exports will have to be even higher than the value figures suggest, as each tonne of crude oil is now worth considerably less than it was just a week ago, let alone 2017.

“Developments across the globe since the agreement was signed in mid-January, from the coronavirus outbreak to the falling oil price have made it even less likely that China and the US will be able to live up to their commitments and thereby help boost demand for the shipping industry.

“If the agreement is to make sense, a revision may be needed when the dust has settled around the coronavirus disruptions and there is once again room to focus on trade policies,” says Peter Sand.