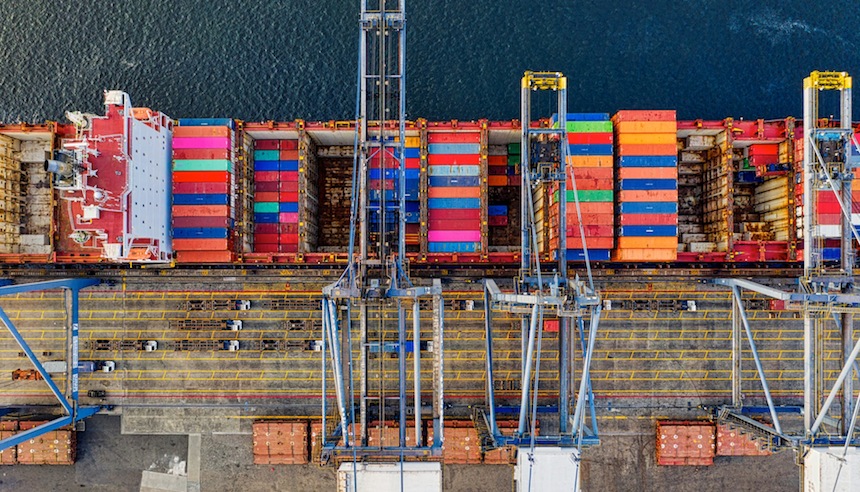 The outbreak of the novel coronavirus, recently dubbed COVID-19, continues to generate massive economic and financial uncertainty when it comes to China and global shipping.

Two weeks ago, we argued that – from an economic perspective – when China sneezes, we all catch the flu. Since the SARS outbreak in 2003, the global economy has become much more interlinked with China and the Chinese economy has grown to become the second largest in the world. While hard facts and reliable data are in high demand, they are in short supply, nevertheless it’s time for a more thorough diagnosis on how this affects the global shipping industry.

The coronavirus outbreak coincided with the Lunar New Year, which led to nation-wide extensions of the holiday. However, even with the passing of the holiday extensions, large parts of China remain closed. For every week that large parts of China are impacted by the outbreak, it becomes more difficult to reach the annual GDP growth target of six per cent. At the very least, the first quarter of 2020 will mark a significant economic contraction compared to the last. As China gradually recovers, so will economic growth get back and shipping demand start to lift freight rates out of the current doldrums.

Limiting the virus’ spread and ensuring economic growth is a balancing act that seems difficult to pull off, but the Chinese government remain steadfast in the quest to ensure economic growth in line with the stated target. To dampen the economic impact the People’s Bank of China has recently implemented fiscal stimulus through interest rate cuts and reverse repo operations to maintain adequate liquidity in the banking system.

The virus itself and economic slowdown has been centred in China so far, but global supply chains have started to feel the ramifications of the widespread Chinese shutdown. Nations heavily reliant on trade with China, such as Singapore and Japan, have issued recession warnings and the coronavirus could also have a macroeconomic impact on advanced economies in the West.

The outbreak comes at one of the worst times for the shipping industry, which is currently struggling with the additional fuel costs from IMO 2020 and the switch to low-sulphur fuels. One can only dread what the implications for companies might be if the coronavirus spreads at a pace greater than what is assumed in the following scenarios:

Additionally, shipyards in China, many of which would otherwise be busy with IMO 2020 scrubber retrofitting, have remained closed and declared force majeure in many cases. An estimated 150 vessels are currently under retrofit at Chinese yards (source: Clarksons). The lockdown of newbuilding yards may prove to be the only silver lining to the outbreak as inflow of more ships are temporarily stopped.

Container shipping is inextricably tied to China with the main trade lanes, namely and China-Europe and China-North America, linking China’s manufacturing capabilities with the rest of the world. Now, the entire logistics chain is being disrupted.

First, many of the producers of containerised goods have halted production or are producing at lower levels.

Second, the Chinese hinterland transportation of containers, in the shape of trucking, is in massive labour shortages. Anecdotal evidence suggests, that, in some provinces, less than 30 per cent of the truck drivers have reported for duty.

Unsurprisingly, faced with the lower container volumes, container carriers have started large-scale blanking of sailings (cancelling them). On the Asia-North Europe trade lane, 40 sailings have been blanked in the eight-week period after Chinese New Year, compared with the 15 sailings blanked last year. (Source: Alphaliner)

The virus will tighten its grip on the container market at different paces. The intra-Asian market will be the first to feel the blow with fewer semi-finished goods, such as parts used in car manufacturing, being transported to manufacturers in nearby countries like South Korea and Japan. Should the regional manufacturers slow production due to supply shortages, the long-haul trades will soon hereafter start to feel the pressure. 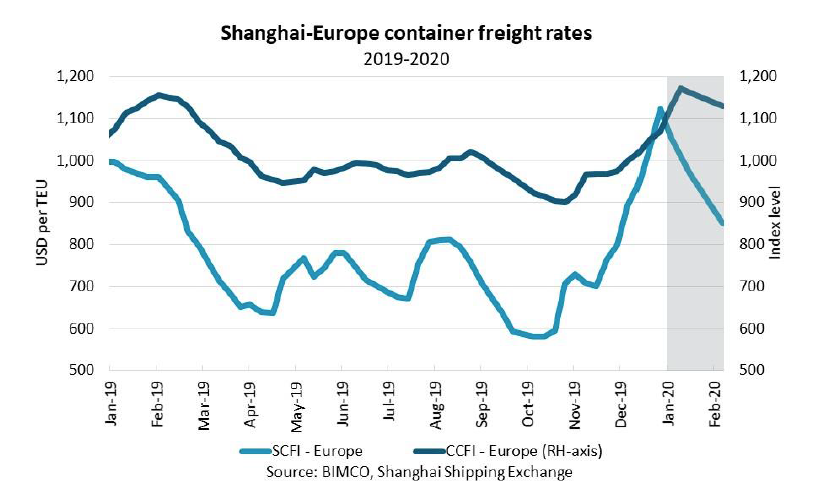 Currently we are seeing carriers trying to mitigate the low container volumes in Chinese ports by blanking sailings. If the situation continues, we could start to see global supply outages in retail stores. Manufacturing in Europe and North America could also start to decline, as some supply chains are reliant upon the Chinese semi-finished goods.

In which ways does it impact liner shipping?

In the Scenario 1, the impact on the long-haul trades will remain largely unaffected, given the capacity management measures already exercised. February traditionally brings with its declining freight rates and in this scenario, the month will unfold largely within the scope of usual seasonality. Yet, volumes will remain lower this time around, especially on the Intra-Asian trades, which could bring a minor disruptive interference to global supply chains.

In Scenario 2, more dark clouds will start to gather. A temporarily obstructed active labour force, caused by a continued wide-spread quarantine, will extend disruptions to manufacturing, hinterland transportation and port operations. Given the lower container volumes, caused by a halt to regional manufacturing, the disruption could extend into a global supply shortage of retail and manufactured goods.

In this case, manufacturers in Asia and rest of the world, reliant upon semi-finished goods imported from China, will have to temporarily cut production, creating a dent in manufacturing activity on a global scale. If that happens, container ship freight rates and time-charter rates will come under massive downward pressure. However, in this scope of influence, the effects will only be transitory, and we are likely to see a gradual rebound back to normal market conditions after weathering the storm.

The wider implications remain difficult to sketch given the current information vacuum, but one aspect has become painstakingly clear: the fragility of global supply chains. The US-China trade war served as the tinder, but perhaps the coronavirus will be the match that ignites a larger scale restructuring and diversification of global supply chains to other Asian countries and beyond including increased near-shoring.

Dry bulk shipping is set to be hit the hardest, given the sector’s heavy reliance upon Chinese import demand. China accounted for roughly 35 per cent of all seaborne dry bulk imports in 2019.

The extended Lunar New Year shutdown has already materialised in the freight rates. Dry bulk earnings were already heavily battered by seasonality, the implementation of IMO 2020 regulation, but the coronavirus also dealt an additional and significant blow.

As widely reported, the Baltic Exchange Capesize Index (BCI) has recently plummeted into negative territory at the end of January. The negative index itself conveys little useful information, but average earnings suggest the same message, sitting at USD 2,735 per day on 20 February 2020. Similarly, the smaller segments have followed down the Capesize path and stayed in unprofitable territory in recent months.

Traditionally, the dry bulk market enjoys a sharp pickup after the Chinese celebrations of the Lunar New Year are concluded. With only little improvement in freight rates this week, the coronavirus has postponed the rebound.

Dry bulk demand has traditionally picked up after the Lunar New Year in China, but not this time around. The coronavirus has postponed the comeback of normal market conditions.

If assuming, in Scenario 1, that China manages to contain the virus by end of February, and that industrial production picks up through March, the impact of the virus on the dry bulk market will remain relatively short lived. 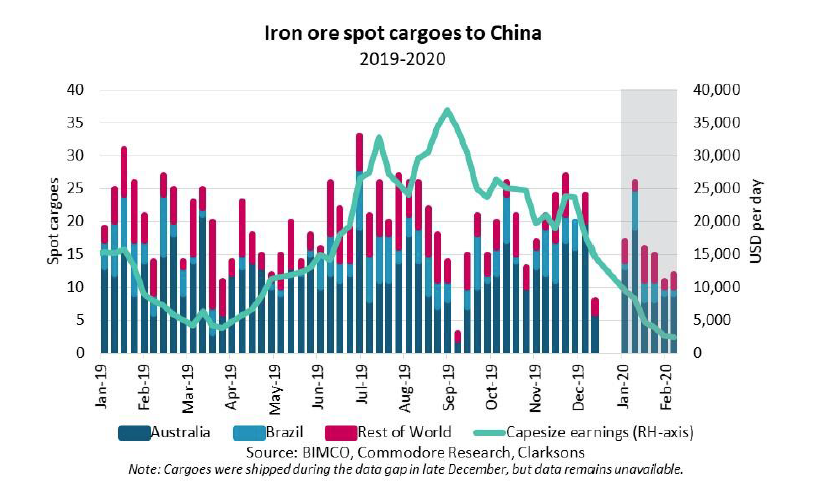 Given the lower level of iron ore spot cargoes, and the long-running trend of Chinese steel production favouring Electric Arc furnaces which used scrap metal and not iron ore, BIMCO expects Chinese iron ore imports to decline year-on-year for 2020 as a whole.

Chinese imports of coal, the second largest dry bulk commodity, will similarly take a coronavirus-induced blow. The extended holidays and slower industrial production will reduce demand for coal-powered energy, which essentially destroys demand permanently. The coal burn at six major power plants have come down 51 per cent from January 1 and has remained largely flat at that level in the weeks after the Lunar New Year. (Source: Commodore Research)

China remains the world’s largest producer of coal, and with the pressure to reach annual GDP targets, the government may prioritise domestic production over coal imports. Growth of coal imports is hereby likely to by low in 2020.

In this situation, improvements for dry bulk earnings in Q1 will come in the shape of declining bunker prices and not by demand pick-up.

The coronavirus has put tanker freight rates under massive downward pressure. Very Large Crude Carrier (VLCC) earnings from the Persian Gulf to China have dropped from US$103,052 per day on January 2 to US$18,326 per day on January 18. However, coronavirus has not been the only influence on the oil tanker market in this period: the US recently also lifted sanctions on a large Chinese tanker entity, prompting a large fleet of VLCCs to enter back into the market.

In the wake of the coronavirus, the global demand outlook for liquid fuels has been downward adjusted by 378,000 barrels per day (bpd) from January to February (source: EIA). The outbreak is set to drive down China’s liquid fuels demand by 190,000 bpd on average in 2020. The adjustment relies on three components: slower economic growth, flight cancellations and reductions of other transportation fuels.

As mentioned, in BIMCO’s coronavirus Scenario 1, it is assumed that Chinese oil refinery outputs and crude oil imports will stay low through February but normalise through March and resume at normal conditions in April. Tanker earnings will be at the disease’s mercy during February through March and will not necessarily exhibit a sharp rebound afterwards. Much of the oil demand associated with economic activity, Lunar New Year flight travels and ordinary oil product consumption is permanently destroyed, thus we should not expect a v-shaped recovery. 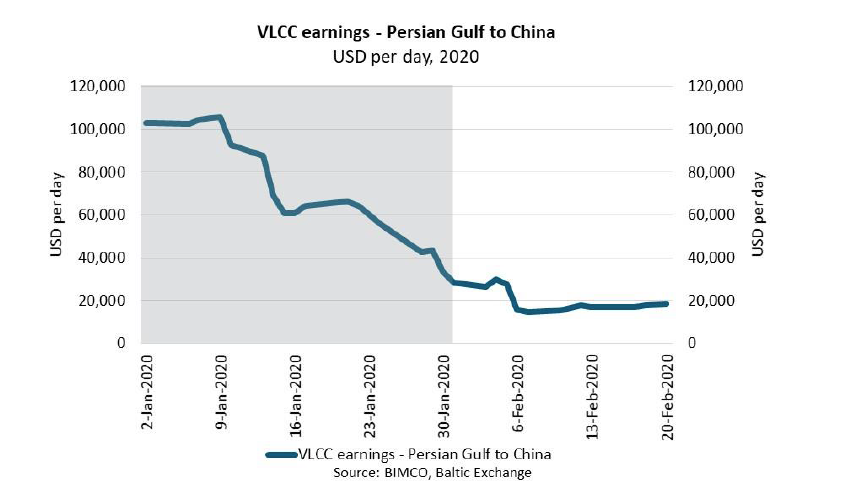 Demand is destroyed in China due to the coronavirus. Demand stemming from consumer spending, power generation and industrial production is lost every day that large parts of China remain quarantined. That demand will not necessarily rebound once the virus is contained.

In Scenario 2, Chinese crude oil imports will remain low throughout the remainder of Q1, before picking up to normal conditions in Q2. When coupled with the additional fuel cost of IMO 2020, the quarterly profit margins of many tanker operators could head back into negative territory, a glaring contrast to the positive results reported in Q4.

Just a month ago, the freight rates were hovering in extremely profitable territory, driven largely by the tightening of the US sanctions regime, seasonality and trade rerouting associated with IMO 2020. Yet, this ought not to be confused with strong market fundamentals, as this is certainly not what we have. The total crude oil tanker fleet grew by 6.2 per cent in 2019, a level which far outpaced demand. With coronavirus already slowing demand for 2020, the year is not exactly shaping up to bring the supply and demand balance back on course.

The outbreak of the novel coronavirus has illustrated just how dependent shipping has become on the Chinese economy. If large parts of Chinese labour force are quarantined, the commercial shipping segments will be stuck in gloomy territory.