FEATURE: Container lines speed up their assault on reefer cargo

Container shipping lines are increasing their share of the seaborne reefer market and are forecast to accelerate their assault over the coming years, according to the latest edition of the Reefer Shipping Market Review and Forecast 2017/18 published by Drewry. 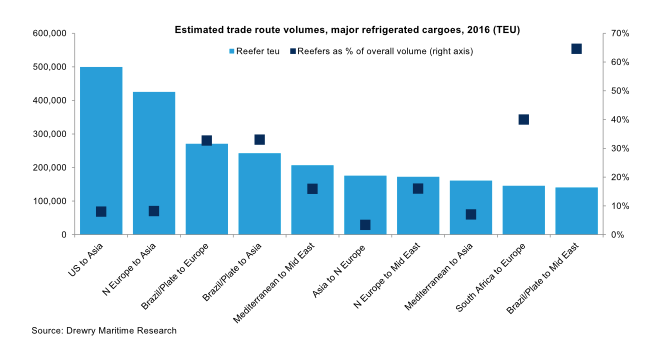 One interesting development in 2017 saw specialised reefer operator Seatrade team-up with CMA CGM to provide a 13-vessel reefer container service offering a weekly sailing between Europe and Australasia. It remains to be seen whether this sets a trend for the industry.

The resilience of the industry to adverse economic, commercial and even climatic conditions has been demonstrated once again as seaborne perishable reefer trade increased in 2016 and is forecast to grow further still in 2017. This year, Drewry has incorporated the pharmaceuticals, cut flowers and confectionery sectors into its assessment of the reefer market, adding up to 3.3 million tonnes of seaborne cargo in 2016. By 2021, seaborne reefer cargo will exceed 134 million tonnes – increasing by an average of 2.8 per cent per annum, according to Drewry’s report.

Despite future seaborne cargo growth levels being lower than those of the last decade (3.3 per cent), such increases will have a significant effect on container lines with reefer capacity. With almost 400 containerships with reefer capacity yet to be delivered, and possibly more still to be confirmed, Drewry looked at the effect this will have not only on overall cargo tonnes carried, but also on capacity utilisation. Based on the confirmed orderbook, despite significant increases in reefer (container) capacity, reefer utilisation will remain broadly stable as a result of the increased seaborne cargo volumes and rising market share for the reefer containership mode.

On the other hand, with a reducing specialised reefer fleet, not only will this mode see its cargo volumes decrease, but also its market share will reduce year-on-year. Nevertheless, it currently provides around five per cent of overall reefer capacity yet carries almost 21 per cent of total seaborne perishable reefer cargo. Inevitably, although still carrying a disproportionate volume of cargo, both cargo tonnes and market share are set to fall for this mode.

Drewry has continued to analyse the total global TEU of perishable reefer cargoes by commodity. In addition, the report looks at almost 30 key trade lanes and compares reefer TEU volumes for 2016 with those for 2015, as well as calculating the reefer percentage of the overall (reefer and dry) trade. Key trades are highlighted in the chart above.

One area to watch is the potential lack of reefer container equipment. A lack of recent investment has already led to shortages in Europe and Brazil during the second quarter of this year, a situation that is likely to repeat itself. Although carrier consolidation may result in an improvement in container utilisation and efficiency, the lack of container equipment orders placed in 2017 is a concern.

“The reefer sector continues to report strong cargo growth which is very encouraging for vessel operators. However, the transition from the specialised operators to the reefer containership operators is gaining momentum,” said Drewry’s report editor Kevin Harding.