Global economic activity continues to suffer as the coronavirus runs rampant and manufacturing PMI readings for April indicate a massive weakening of global manufacturing. While flash readings in the US and Eurozone composites declined to 36.9 and 33.6 index points respectively, the flash reading in Japan showed surprising resilience, declining only 1.1 points to 43.7 index points in April. Nonetheless, the readings reveal deep contraction which will result in choppy seas in the coming months, particularly for container shipping.

China’s manufacturing PMIs in April highlighted sluggish recovery from March. The PMI figure from Caixin highlighted a contraction to 49.4 index points, while the figure from the National Bureau of Statistics China (NBS) showed an expansion to 50.8 index points.

The common denominator between the two was the New Export Orders sub index (at 33.5 points), which in both cases plummeted amid slowing demand from the rest of the world. 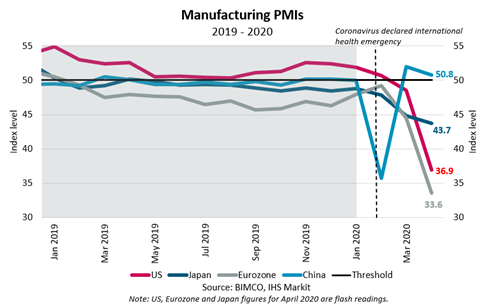 US retail sales at clothing stores halved in March

Global manufacturing activity is slowing on the back of the constrained labour force and faltering demand, and data from the US Census Bureau highlight how US retail sales effectively slammed into a brick wall in March 2020. As the US entered a state of lockdown in March, clothing and clothing accessories stores saw retail sales drop 50 per cent from February 2020 as well as year-on-year.

Similarly, sales in furniture stores dropped 26.8 per cent from February, while motor vehicle and parts dealers had their sales slashed by 25.6 per cent, also compared with February. The products and parts sold in these types of stores constitute a significant fraction of all seaborne containerised goods, and such dramatic drops in US retail sales are indicative of the calamity that container carriers face. 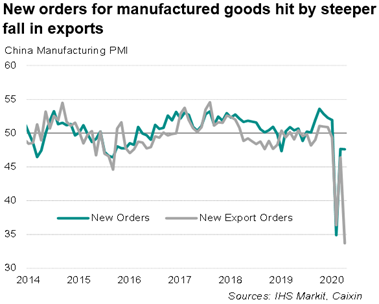 In Japan and the Eurozone, the manufacturing PMIs have been in contraction since February 2019, while the US remained in expansion until March 2020. With all the readings now in unprecedented contractionary territory, and the US and Eurozone seeing the largest declines on record, dwarfing the impact of the financial crisis, a gloomy path lies ahead. The slowing new orders domestically, as well as for exports and diminishing backlogs, amplifies the bleak outlook for the foreseeable future.

While PMI readings could quickly be back above 50 index points, it does not imply a return to pre-crisis conditions, but rather, a slight improvement from last month’s activity level. It is important to note that structural damage has already been inflicted on economies around the world, including massive rises in unemployment which will protract any recovery to normal conditions.

Container carriers will be stress-tested in the coming months

Manufacturing PMI readings serve as a bellwether for container shipping volumes for the months ahead, and recent data suggest that 2020 will be a stress-test for container carriers, perhaps on an unprecedented scale.

Idle container ship capacity ticked up when Chinese lockdowns created export disruptions in February, and idle container capacity remain around 10 per cent of the total fleet as demand for containerised goods in advanced economies fade. Supply chain disruptions are on retreat, which is certainly a positive development, but with slowing consumer demand for finished goods, seaborne container volumes are set to remain low and outright decline in 2020.

In recent years, the container shipping industry has been battling challenging market conditions, squeezing container carriers’ operating margins. 2019 marked, for a change, a full year of profitability judged by the average operating margins for main carriers, according to Alphaliner, yet, faced with the greatest economic downturn since the Great Depression during the 1930s, any profits of recent years could be wiped out in a matter of months.