What’s not to like about 2021 for container shipping? Freight rates are record high, record amounts of cargo are shipped across the Pacific Ocean, as well as globally, and the previous yearly record for new containership orders has just been broken (measured in capacity) in less than eight months.

As a result of very healthy shipowner bottom lines and carriers experiencing a lack of tonnage, 619 containerships are now on order for future delivery. Of those, 381 have been ordered in 2021 alone and never has 3.44 million TEUs been ordered in such a short time span. Still, it’s not a record for the total orderbook, as 6.8 million TEUs were on order by the end of July 2008, compared to 5.3 million TEUs by late August.

“Today the container ship order book holds 5.3 million TEUs of shipping capacity, which is scheduled to be added to the fleet from 2023 and onwards,” says Peter Sand, BIMCO’s Chief Shipping Analyst. “Entering 2021, the order book stood just at 2.5 million TEUs. Since then, a record high 3.3 million TEUs has been ordered, indicating that shipowners are going big on investing in new capacity.

“Size still matters, but it is no longer the only thing that matters. Your ships must be ready to fit emerging trade lanes, and many of the new ships on order will be scrubber-fitted.”

The 16,000TEU ship was the most popular on order

In February, March, April and June, a total of 60 containerships with a cargo carrying capacity of 16,000 TEUs each were ordered by just five different owners. Half of them were ordered by two Top-4 tonnage providers and one minor, while the other half was ordered by operating liner companies. 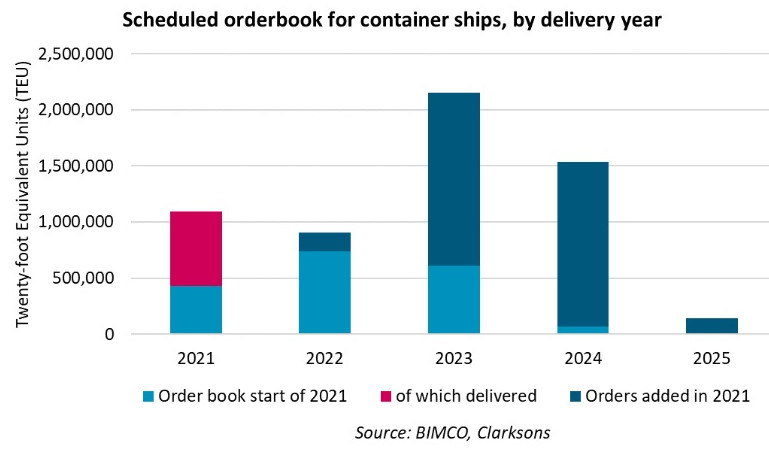 “It is very much a sign of the times too; you go big, or you don’t go at all. You order four, five or six ships, or as much as 20 units, in one go, and at one yard only. The buying power when you spend US$2.5 billion is significant,” says Sand.

As owners have observed different trade patterns forming in recent years, and still do, due to the US-China trade war and the Covid-19 outbreak, the more “versatile” 13,000-16,000TEU ships have been preferred to the Ultra-Large Container Ships (ULCS).

Fitting a scrubber to your newbuilt proved popular too

In particular for the larger ships, that lower their voyage costs the most from consuming the less costly heavy-sulphur fuel oil (HSFO). Out of the 168 ordered containerships year-to-date, with a capacity of at least 11,800 TEUs, 117 will be delivered with a scrubber fitted directly from the shipyard (71 per cent). A total of 29 units will be scrubber-fitted but also made LNG-ready, whereas 34 units will be delivered as “LNG-capable”, meaning that they will run on gas from day one. Lastly, 17 ships appear to be without any such modifications upon delivery.

Ships are never delivered as scheduled in the orderbook

Container shipping capacity of 1.5 million TEUs has been ordered so far in 2021 for delivery in each of the years 2023 and 2024. As the scheduled orderbook for 2024 today stands at 2.15 million TEUs, it is worth noticing that the record delivery year dates back to 2015 when 1.66 million TEUs entered active service on the global container lines’ networks.

Due to this inherent bias, BIMCO always accounts for a certain delay in scheduled deliveries when aiming at forecasting what will in fact be delivered in any given year. BIMCO’s current estimate suggests that the 2015 delivery record will not be broken. For an update, please see the quarterly Shipping Market Overview & Outlook, the third of the year, which is due in early September.

“In addition to orders for container ships, we have also seen some liner companies securing air cargo capacity for the short and longer term. To me that is in interesting development, as it indicates that liners are serving shippers to a greater extent than before by moving more cargo in different ways going forward,” Sand concludes.