Written by Baird Maritime on October 22, 2017. Posted in Boxship World. 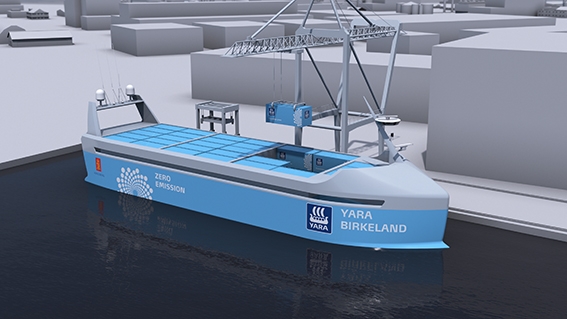 The world’s first autonomous, zero-emissions container ship is set to embark on its maiden voyage next year, delivering goods between Norwegian towns.

Developed by Yara and Kongsberg and named after Yara founder Kristian Birkeland, the self-driving ship Yara Birkeland would transport fertiliser from Yara’s plant in Porsgrunn to ports in Brevik and Larvik in the latter half of 2018.

It will operate as a manned vessel for its first voyage and is expected to move onto remote operation by 2019, carrying out fully autonomous operations from 2020.

The Marin Teknikk-designed vessel will be 79.5 metres long and have a moulded width of 14.8 metres, a depth of 10.8 metres and a full draught of five metres.

To be monitored from three operation centres, it will have a service speed of six knots and a maximum speed of 10 knots.

The electric-powered ship will be used to transport large cargo containers.

“Every day, more than 100 diesel truck journeys are needed to transport products from Yara’s Porsgrunn plant to ports in Brevik and Larvik where we ship products to customers around the world,” said Svein Tore Holsether, Yara president and CEO.

“With this new autonomous battery-driven container vessel we move transport from road to sea and thereby reduce noise and dust emissions, improve the safety of local roads, and reduce NOx and CO2 emissions.”