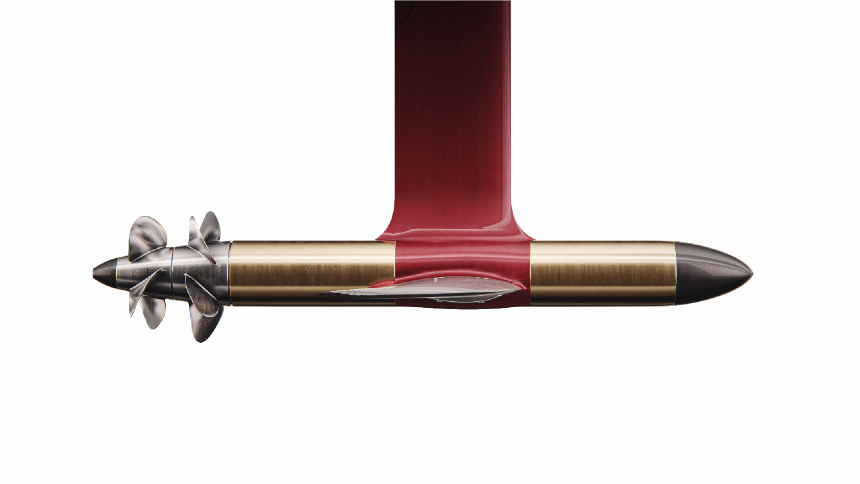 In addition to being capable of low-noise operation even at speeds of 30 knots, the new Candela C-POD also has fewer moving parts, particularly the complicated set of gears typically found on conventional boat motors. Instead of having the motor situated in a box above the waterline, two ultra-compact yet powerful electric motors are mounted under the water in a torpedo-like socket, directly driving the boat’s propellers.

Each motor is coupled directly to a propeller, which minimises friction losses. Candela said the contra-rotating propellers provide the added benefit of very high propeller efficiency.

For the C-POD motors, Candela opted to increase the rpm and lower the torque to boost the C-POD’s power density so that the propellers’ diameter will be kept as small as possible, thereby minimising drag.

The best way was to split the thrust needed on two propellers. This would allow for propellers with smaller diameter and thereby higher rpm – and in turn smaller motors.

The placement of the motors under the water also solves problems associated with heat. The pod drive was designed to be directly and efficiently cooled by the flow of seawater, thereby enabling higher operating temperatures and extracting more power from the motors.

Candela expects that, freed from gears and with very few moving parts, the C-POD will last several thousand hours without any maintenance whatsoever.

Developing 50 kW for take-off, a single Candela C-POD has enough thrust to propel the 12-person water taxi to a speed of 30 knots. For the company’s bigger 30-person shuttle ferry, two C-PODs will provide the same speed.