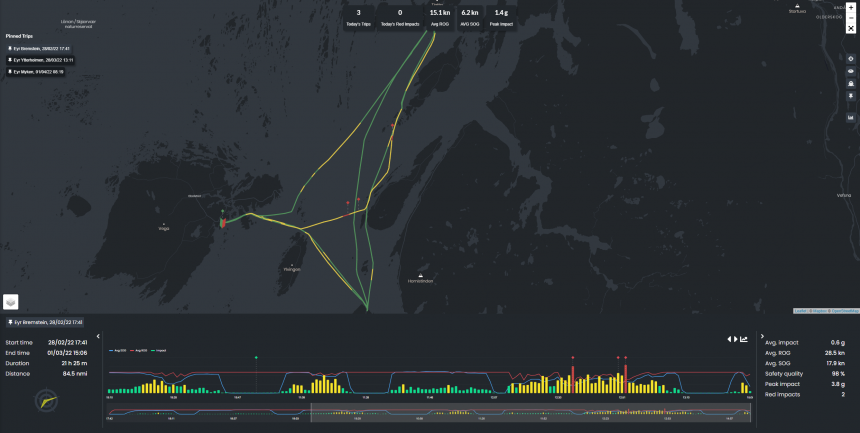 It was 17:41 on February 28 when Eyr Bremstein set off from the small island of Vega, located in the southern part of the Nordland County on the northwest coast of Norway.

The island is part of the larger Vega Archipelago and commune, home to some 1,200 people and listed as a UNESCO World Heritage Site, known for its traditional industry of eider duck down harvesting and Stone Age settlements.

Eyr Bremstein was heading off on its regular route with its first planned stop in the northern part of Brønnøy, southeast of Vega, and from there to Tjøtta, northwest of the island. This route is typically repeated two to four times in one trip, with at least one trip every day.

Eyr Bremstein is a 20-metre, 49-tonne ambulance vessel run by the Redningsselskapet, the Norwegian Society for Sea Rescue. The vessel is of vital importance to the local community, which needs to rely on it 24/7 for 365 days of the year to transfer patients from around the archipelago and islands to the local hospital.

The vessel therefore needs to be in operational condition at all times and its crew needs to be fit for duty. Much further west, in the Icelandic capital of Reykjavík, a small team of entrepreneurs, engineers and programmers studies data coming back from Eyr Bremstein. They are the team that makes up Hefring ehf., a technology company that has developed a solution intended to digitally augment boating operations with guidance, monitoring, and analytics.

Their Hefring Marine system is installed on the vessel and its siblings, Eyr Ytterholmen and Eyr Myken, ambulance boats serving other areas further north. Two additional Hefring Marine systems are in place in high-speed rescue vessels down on the country’s south coast, including the 2021-build, 17-metre, 27.8-tonne, 42-knot RS 172 Ragnar Stoud Platou.

The ambulance boats, Bremstein, Ytterholmen and Myken, are named for the coastal lighthouses located in the areas where they each respectively stationed. Their common first name, Eyr, is the same as that of the Nordic goddess of medical skill.

Because of the common history between Norway and Iceland, it is not perhaps surprising that the Hefring name is also inspired by Nordic mythology. The Jötun Ægir and the goddess Rán, the deities of the sea, together had nine daughters who each personify different types of waves. Hefring is the rising wave.

Because of the importance of the ambulance vessels for their communities, the Redningsselskapet decided to acquire and pilot several Hefring Marine systems.

“Our main criteria for choosing a monitoring system was to learn more about the consequences of impacts on crew and vessels over time,” according to Knut Hveding, Manager of New Builds for the Redningsselskapet. “We chose the Hefring Marine system because of its unique guidance and analysis features that can help us to prevent heavy impact loads to crew and the vessel.”

“The first prototypes for the Hefring Marine system focused on presenting g-force impact loads to operators in real time on a display in the console,” said Karl Birgir Björnsson, CEO and co-founder of Hefring ehf. “By visualising the significance of the impacts they, their crew and passengers were experiencing, they might adjust their speed accordingly. However, if the impact had already happened, then the damage might already be done. We therefore quickly decided that we needed to go a step further.”

Today, the Hefring Marine system is an intelligent solution for vessel operating support and management. On board, it provides operators with real-time speed guidance to help optimise safety and fuel efficiency and to reduce impacts and carbon emissions. The system is forward-looking and continuously varies its guidance to reflect prevailing conditions, actual speed and vessel motions.

On shore, fleet managers can monitor all vessels live simultaneously in the solution’s cloud-based admin console. Not only will the system return data and analysis on speed and impacts, but also on engine performance, fuel consumption, transmission oil pressure, battery status and practically anything that is available on board. All data is logged, meaning all trip and vessel data is available for review or analysis down to a second-by-second basis.

“Hefring has been an easy developer to cooperate with,” said Aksel Finseth, Technical Inspector for the Redningsselskapet ambulance vessels. “They listen to what we want the system to do, and they update the system at a relative high frequency, so the progression rate is good. The hardware itself was easy to connect, mostly ‘plug and play’.

“The time used for installation is mostly wiring data cables to the main unit. The hardware system is made up of a main control unit and high-performance sensor units. The system typically only needs one sensor unit but since we are running large vessels and because we wanted to record both the effects of impacts on the crew as well as to the vessel structure itself, we have one in the vessel’s longitudinal centre of gravity (LCG) position and one by the helm in the wheelhouse. For us the system is performing exactly as intended. We also work closely together with the team at Hefring to get the best product and results.

“The ambulance vessels have the crew situated in the front to make room for the ambulance compartment in the back. While this makes for good utilisation of space, the consequence is that crew members need to endure a larger impact load. The patient compartment is situated in the LCG, where the load is significantly lower. While we want to know what impacts crew are being exposed to, we also want to learn if the accelerations we expose the patients to are in line with international regulations on passenger transportation.”

The first part of Eyr Bremstein’s trip on February 28 was relatively smooth. Recorded impacts were minimal that evening, with the peak being recorded at 1.8g, but the system begins to consider impacts to be serious once they start getting close to or if they exceed 3.0g. That impact was recorded in the crew area, but the LCG area showed only 0.5g, just under 30 per cent of the impact experienced by the crew and consistent with other measurements.

As Finseth mentioned, the crew are continuously exposed to much greater impacts than the patient and LCG area. The next day, Eyr Bremstein took off again at around 11:00am. Less than 20 minutes into the trip, it had already started to record higher impacts than during the previous days trip.

An hour later, as the vessel headed south-west from Tjotta to Vega, it was confronted by 14 metre/second south-westerly winds, enough for the boat to start moving more aggressively through the water and taking on several impacts that enter the system’s “Red Impact” area, defined as exceeding 3.0g.

The system’s speed guidance at certain points recommends the vessel’s speed be reduced to 12 knots, but the vessel’s actual speed and the system’s guidance speed move in tandem as the vessel navigates through the rough waters. The careful helmsmanship seems to avoid further heavy impacts, which would certainly have been recorded had the speed not been adjusted to correctly match what was required by the conditions.

Meanwhile, the crew indicate their level of discomfort by pressing the buttons that the Hefring team made for them, the data from which is recorded by the system and presented in the admin console as red markers on the interfaces map and a bar chart above the heavy impacts.

Using this data collected over time, the Redningselskapet will be able to correctly identify at what point the crew begins to feel discomfort, which has so far been shown to happen exactly when impacts that exceed the Red Impact threshold are recorded.

Among other things, the Hefring Marine system’s guidance speed takes into account a pre-defined maximum speed and impact thresholds, but the Redningsselskapet will be able to adjust this to match the results of this project, where the crew can follow the guidance of the system to avoid situations in which they begin to experience discomfort.

“Our main first customers for the Hefring Marine system have been search and rescue associations, particularly in northern Europe. The solution’s benefits centre heavily on safety improvement, which fits well the ambitions and aims of these organisations, as duty of care for their crew is of critical importance,” said Björnsson.

Aside from monitoring crew and patient welfare, the Hefring Marine system is proving useful for monitoring engine and other vessel data. As the ambulance boats need to be ready to go at any time, it is vital that they are operated correctly and with care. The Hefring Marine system has therefore been of value to the Redningsselskapet to monitor usage for maintenance prevention. For instance, monitoring how rapidly the vessels are being accelerated up to speed to determine how quickly the engines are heated is important to prevent costly damage that would put a vessel out of action for a long time.

“While improving safety has been the main benefit of the solution for our current customers, the solution has a broader application and we are engaged in projects that range from yacht tenders to unmanned vessels,” added Björnsson. “The latter is interesting because the system can analyse and make decisions based on what is happening on board, even though no one is there, which is crucial for any fully autonomous solution or just to avoid damage to stuff on board. Also, with our new fuel-optimised speed guidance features, we are targeting the problem of ever-rising fuel prices and the benefit of being able to better reduce carbon emissions, which is relevant to everyone.”

As for the project with the Redningsselskapet, it has until now focused on monitoring three ambulance vessels and two rescue boats.

“After this pilot project period, once we have collected enough data and tested further, we will decide on the next steps, but our intention is to install Hefring Marine systems on our whole fleet of vessels,” said Hveding.

Eyr Bremstein headed back to Vega on March 1 after completing its journey with a safety quality rating of 98 per cent, meaning that only two per cent of the trip was done at a speed higher than the recommended guidance. Two hours later, Eyr Ytterholmen took off on a journey of its own and the very next day,

Eyr Bremstein started off on another equally long trip. As the winter recedes over the coming months, spring brings calmer weather and smoother seas. The change is evident in the Hefring Marine data, where the charts show the ambulance vessel tracks becoming greener by the day, as the vessels diligently soldier on in their perpetual duty to their communities.