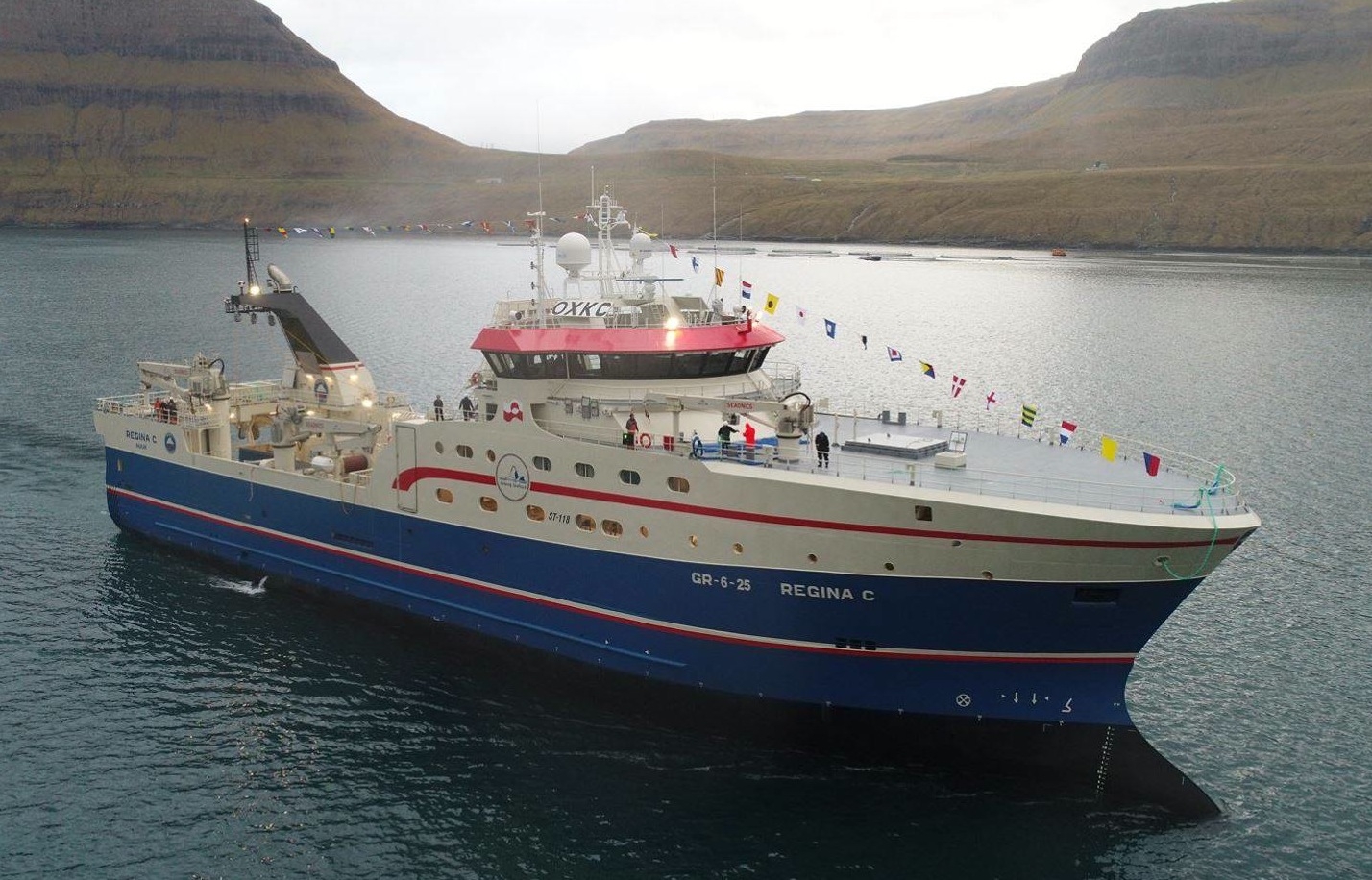 Spain’s Metalships and Docks has delivered an Arctic factory freezer trawler for Niisa Trawl, located in Nuuk, Greenland. The new vessel is a Skipsteknisk design tailored for operation in heavy ice along the coast of Greenland.

The new trawler is named Regina C and has a length of 80 metres and a beam of 17 metres. It was built according to DNV GL class with the highest Baltic ice-class rating.

High standard, comfortable and modern accommodation facilities have been provided for 32 persons in 10 single cabins plus 11 double cabins. Regina C offers the highest possible safety standards for the crew during all kinds of operations and weather conditions.

The vessel was outfitted primarily for the northern coldwater shrimp fishery, but options for other fisheries have been incorporated into its design, including the ability to easily upgrade to triple trawl capacity in the future. Regina C’s design focused on reducing any polluting discharges to water or air and the recovery and recycling of excess energy wherever possible.

The owner was looking for a replacement for its existing ocean going Arctic shrimp trawler, incorporating the latest developments for such vessels. This newbuild is the third trawler for Niisa Trawl to bear the name Regina C, all of which have been designed by Skipsteknisk.

Endurance, efficient catching, a high value product portfolio as well as efficient and palletised logistics were key issues in the development of this design.

The owner was also looking for the latest and most modern standards for health, safety and environmental protection related to operation in Arctic areas. High ice going capacity and winterisation measures have therefore also been key focus areas.

Regina C is currently catching Greenland shrimp, primarily off the west coast of the country. The catch is being processed into “cooked”, “industry” and Japan qualities and then frozen and packed, mainly palletised, and finally offloaded ashore. 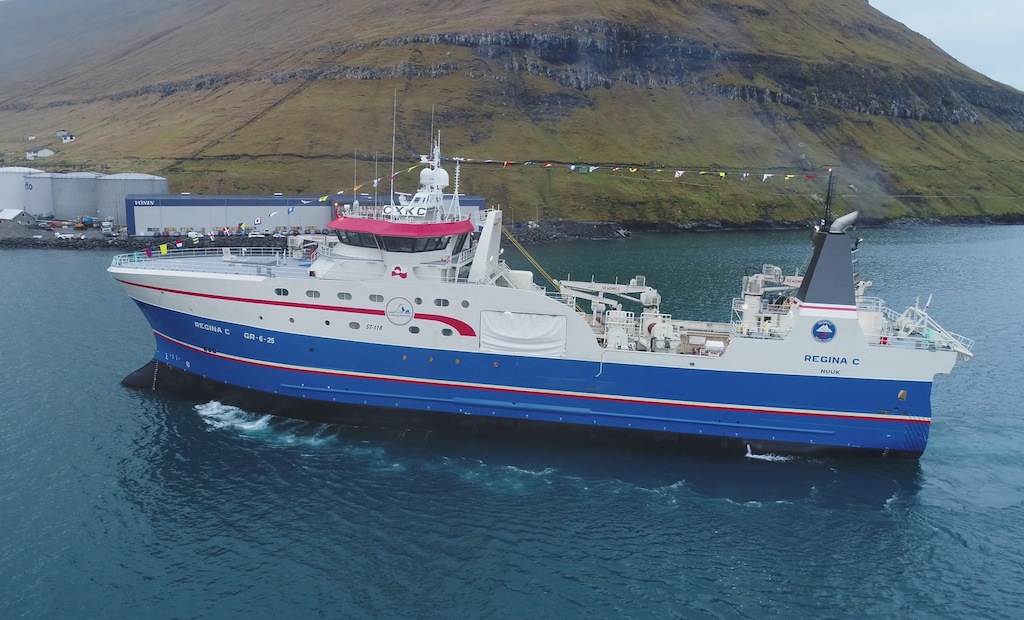 According to Skipsteknisk, the fine tuning and integration of the extensive array of primary equipment systems made for a technological and logistical puzzle which required full attention during all stages of construction.

There is one main diesel engine delivering power to a variable pitch propeller in a nozzle through a reduction gear. A shaft alternator that supplies the main electric power is driven through a PTO on the reduction gear. The propulsion system operates on variable revolutions.

Main electric power is supplied by the shaft alternator on a variable frequency platform, ranging from 50 to 60 Hz. This will allow the propeller to operate more economically during variable loads. There are also two auxiliary generating sets operating on fixed frequency.

The surplus energy from the electric main winches is regenerated during shooting and towing and primarily consumed from the main switchboard.

In addition there are three hydraulic deck handling cranes and one set of ice trawl gallows.

Processing is arranged for grading, cooking and packing of different size of shrimp, as well as separate lines for whitefish including heading, gutting and freezing.

After freezing and packing, the product is distributed into the load hotel where it is sorted, palletised and transferred to the refrigerated cargo hold. Regina C is arranged with two cargo holds with individual cooling elements for the upper and lower holds.

Both deck are made of steel and feature a special anti-skid paint system for safe forklift operation. The maximum pallet height is 2.1 metres on each deck level. Pallets are individually wrapped before taken into the cargo holds. 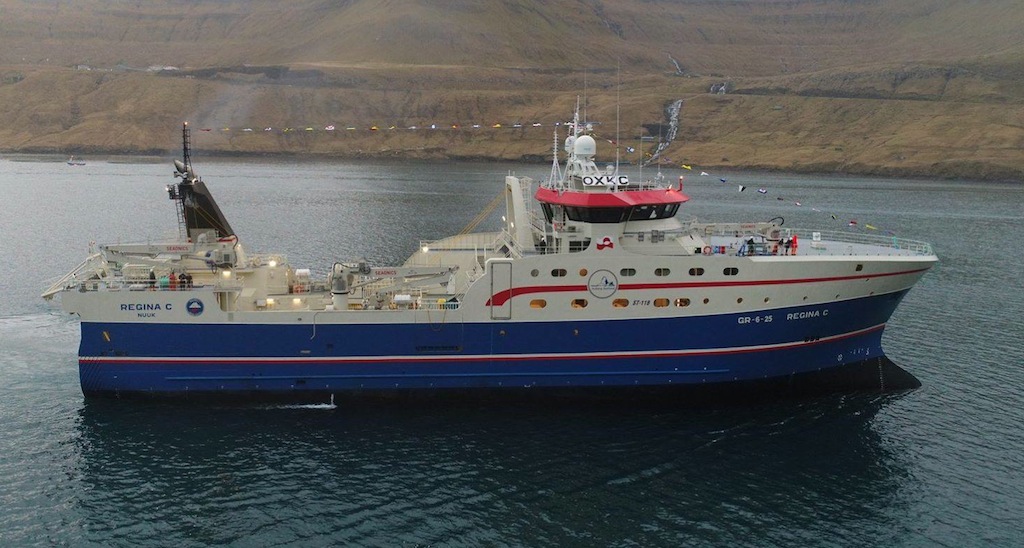 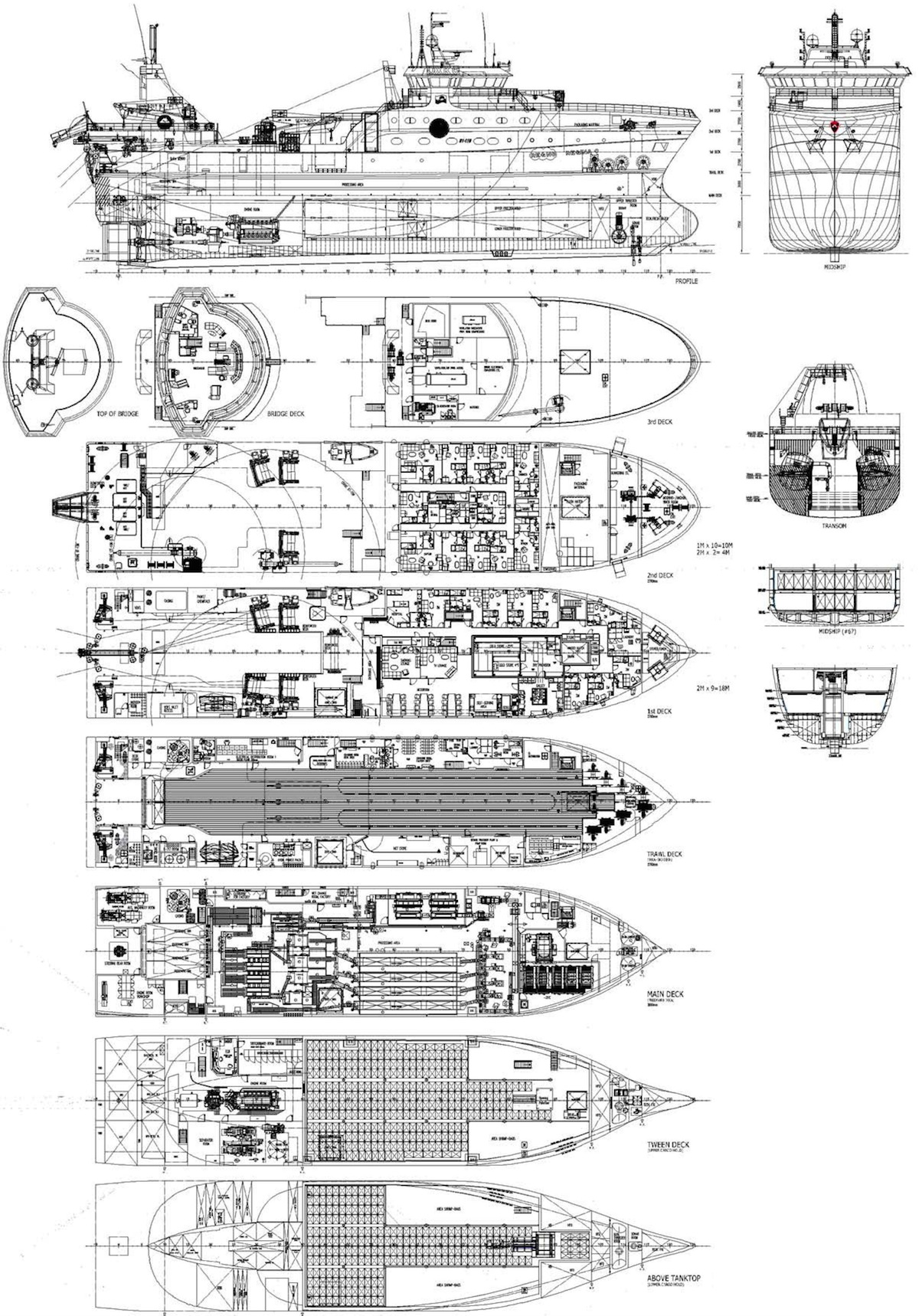