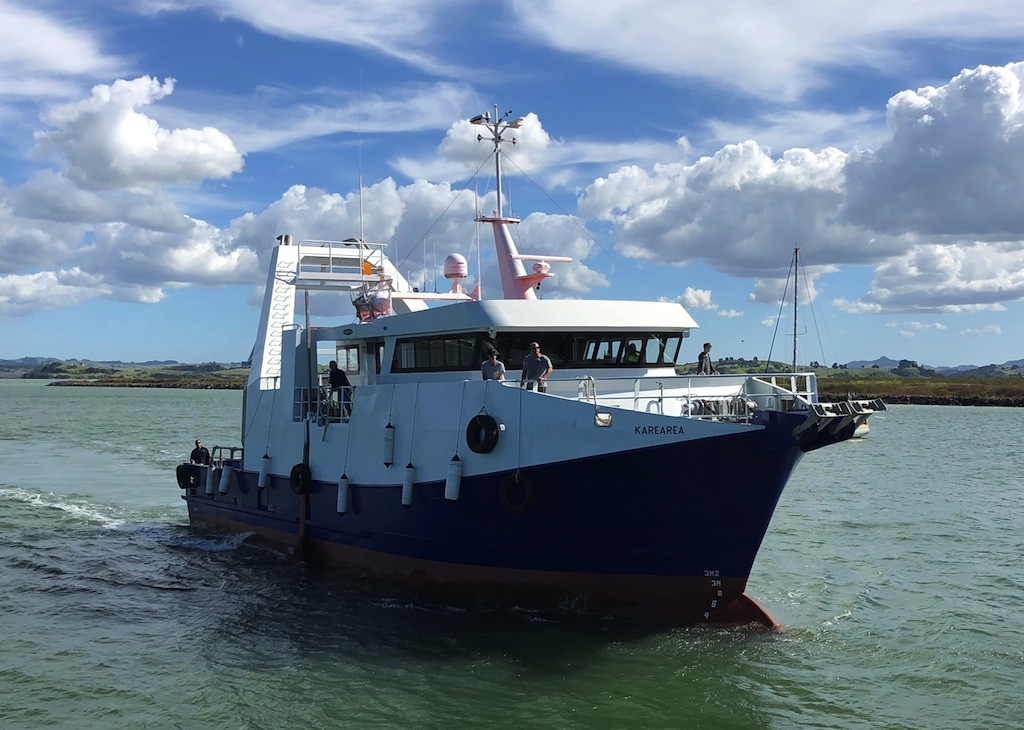 Whangarei (New Zealand)-based Penwarden Holdings has recently deployed the country’s only purpose-designed scampi trawler, following the delivery of the 24.65-metre Karearea from Australia earlier this year.

Designed by Oceantech, which has bases on both sides of the Tasman Sea, and built by Adelaide-based MG Engineering, the steel-hulled and steel/aluminium-superstructured trawler is operating successfully in the cold-water scampi fields off New Zealand’s Deep South.

The arrangement of the Karearea (Maori for New Zealand falcon) was based on the 19.8-metre and 7.2-metre-beam fishing trawler Bilyara, also designed by Oceantech and built in 1988, but with a brief to further expand on that proven vessel’s capacity and operations.

“Lengthening the vessel to 24 metres was adapted early in the design, to take full advantage of our modern vessel efficiencies,” said the design firm.

Particular attention was given to accommodating the 110,140-litre fuel capacity, thereby providing greater endurance of 10,000 nautical miles and “resulting in a very full hull” with 55-tonne freezer hold capacity.

Featuring a distinct bulbous bow hull form, instead of the plumb bow more recently preferred by the designer, the Whangarei-registered vessel was fitted with articulated stabilisers to aid in seakeeping, as well as other modern systems to optimise operations. 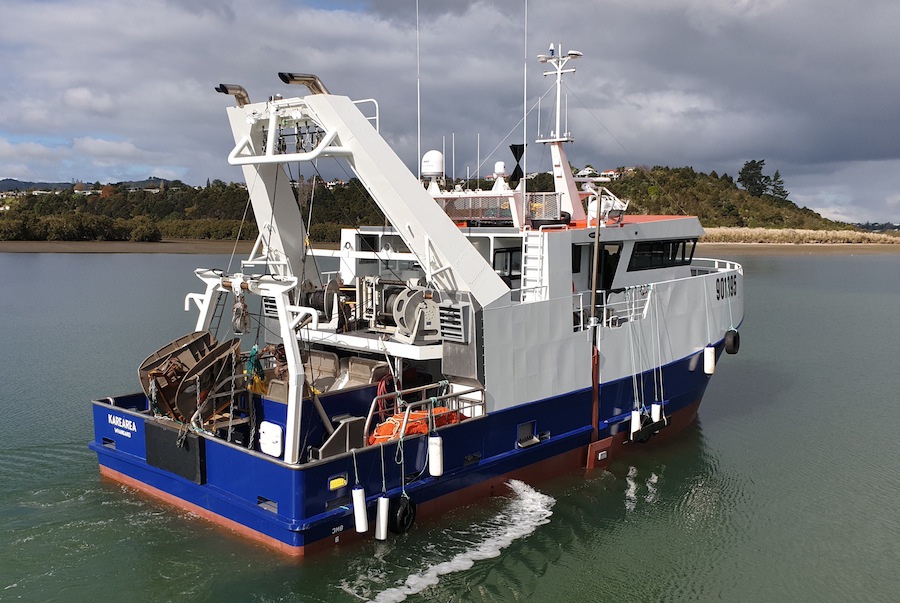 A multi-purpose A-frame, retractable stabiliser fins, RSW catch hopper and articulating stern frame were all included in the design.

The vessel’s focsle deck is equipped with an impressive array of winches, with a 14.5-tonne continuous rated trawl winch. The winch power is matched with a two-metre CP prop and ducted Kort nozzle, providing considerable traction for trawling modern gear.

At eight metres in beam and with 3.5 metres draught, the New Zealand-flagged trawler’s Caterpillar C32 main engine delivers 750 kW at 1,600-1,800 revolutions per minute, providing for a cruising speed of 9.5 knots and maximum speed of 10.5 knots. 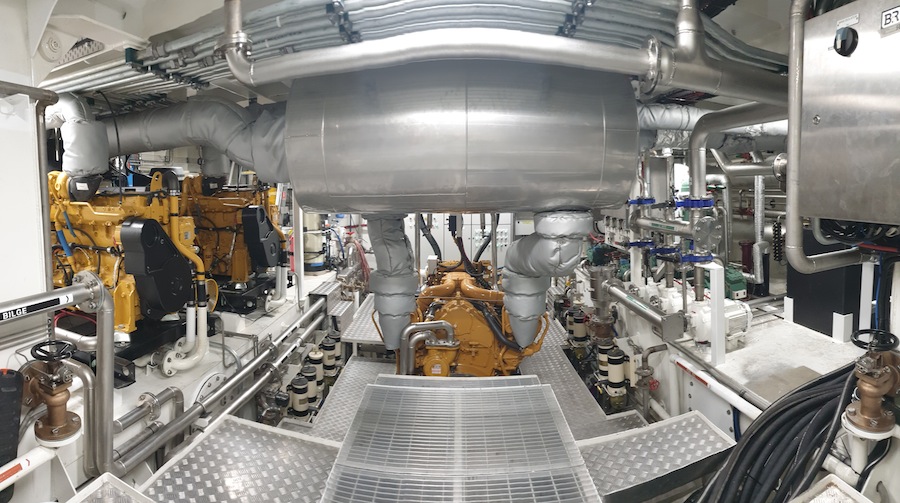 Equipped with a Hundested CPGD50 gearbox, Hundested VP10 propulsion and Caterpillar C7.1 generator, the vessel is controlled by Hypac steering and has a dry exhaust system.

The mechanical fit out of the 16-tonne bollard pull trawler was provided by Marine and Industrial Rebuilds and Craig Tilsner, winches by Neumann Equipment, windows by Windows West, paints/coatings by International Paints and hydraulics by Bosch Rexroth.

Crewed by eight people and with a freshwater capacity of 25,770 litres, the trawler features Holden Calais seating, safety flooring from Adelaide-based Next Gen Flooring, interior and exterior lighting from M2i and safety equipment from Survitec New Zealand. 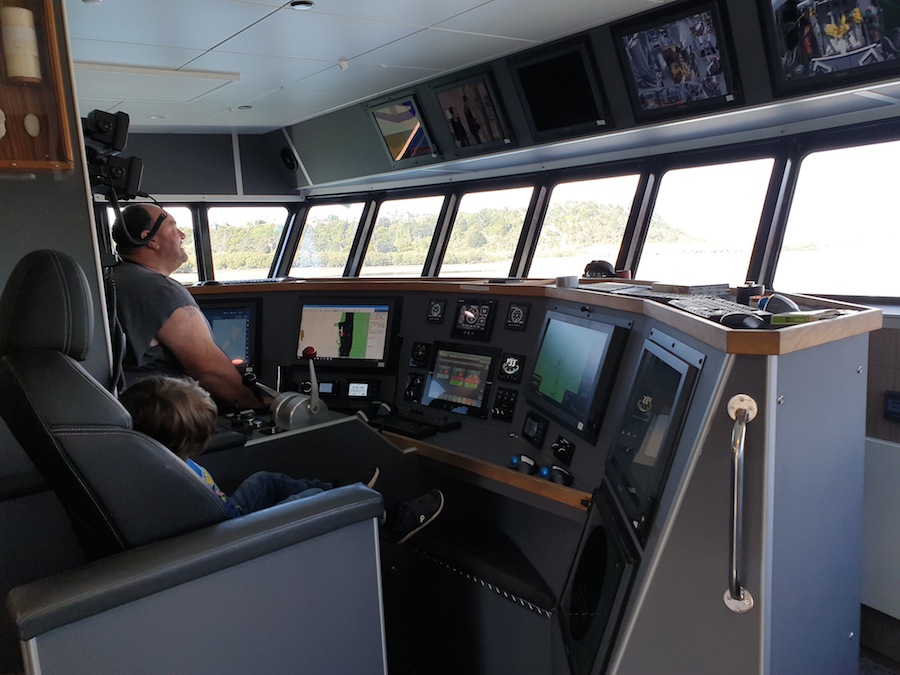 Penwarden Holdings was established in the late 1970s by husband and wife team, Neil and Lyn Penwarden, initially to operate in the Queensland prawn fishery. The firm’s first vessel was the 58-foot, wooden-hulled Chromatt.

The family relocated to New Zealand in the 1990s and entered the scampi industry. The business remains in family ownership with two of the Penwarden’s children actively involved. 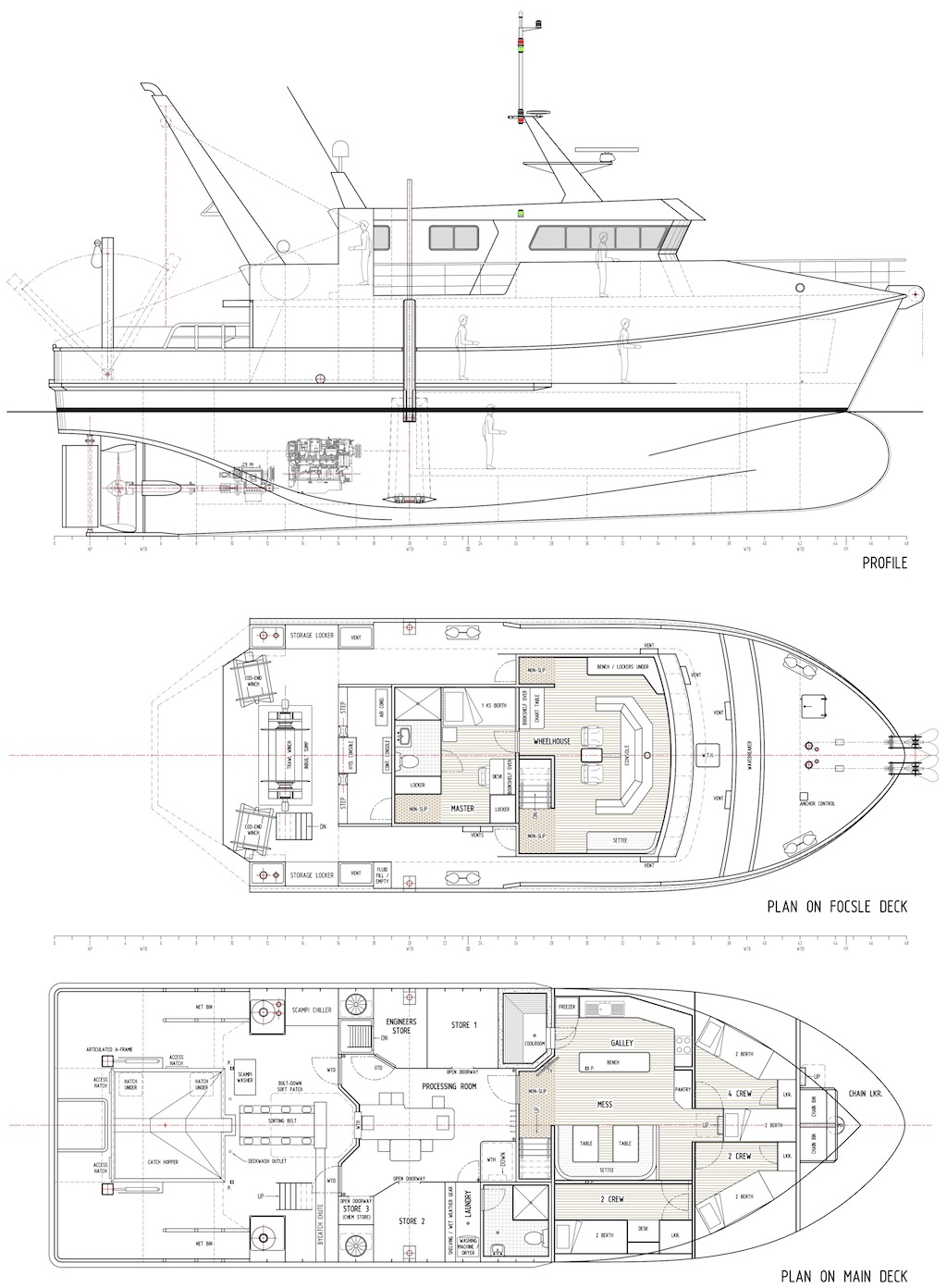