Glehen Shipyard located in the Douarnenez commune of Brittany recently handed over a new pelagic trawler to fishing company La Belle Alliance. The newbuild is a near-identical sister of an existing vessel that the same owner has been operating out of Saint-Gilles-Croix-de-Vie in western France’s Pays de la Loire region.

Designed by local naval architects Coprexma according to Bureau Veritas class rules, the steel-aluminium newbuild has been named Papy Chichi (“Grandfather Chichi”) in honour of the late father of fisherman and La Belle Alliance co-owner Jérémy Chagnolleau. Yann Chagnolleau, who was fondly called “Chichi” by his grandchildren, was one of three volunteer crews with French search and rescue organisation Société Nationale de Sauvetage en Mer who were killed after their lifeboat capsized while responding to an emergency in storm-hit waters off the country’s west coast on June 7, 2019.

The trawler has an LOA of 14.38 metres, a beam of seven metres, and a displacement of 168 tonnes. It is intended to operate in tandem with sister vessel Les Chignolles in trawling for sardines and anchovies to maximise the catch volume on each sailing. The two vessels were acquired for a total cost of €5 million (US$6.12 million).

“The owners wanted a new vessel that can help ensure maximum catch quality,” Coprexma told Baird Maritime, “since they are also involved in fish processing/canning and wholesaling in addition to fishing. The vessel is therefore equipped with a ‘mini assembly line’ consisting of a conveyor belt, a six-cubic-metre RSW tank, and storage for isothermal boxes.” 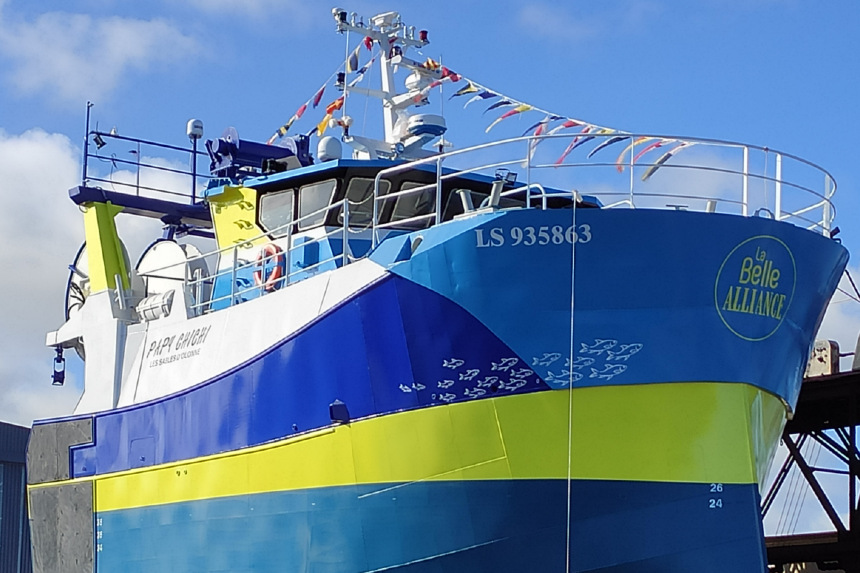 As is the case with Les Chignolles, the catch is hauled on board Papy Chichi by a swiveling tray and then placed in the RSW tank. Following a period of immersion, the fish are then transported via conveyor belt to the tween deck, where the sorting and the processing are carried out in a shelterdeck to reduce the risk of the catch being exposed to impurities.

The processed fish is then dropped into the 50-cubic-metre fishroom in the hold deck via a dedicated chute. Afterwards, the catch is distributed among 40 RSW tubs. Coprexma said the use of the individual tubs helps facilitate the efficient pierside unloading of the processed catch to minimise transport times between the quay and the owner’s cannery, thus further preserving product quality.

“La Belle Alliance also requested more comfortable accommodations for the crew of five,” added Coprexma. “Among the features we incorporated was the semi-inverted bow, which then resulted in an increase in volume along the waterline. This then meant an increase in available space in the accommodation areas to ensure better comfort and improved safety.”

Power for the vessel is provided by one Cummins QSK19 main diesel engine that produces 331 kW. The engine drives a Masson W3350 gearbox to turn a four-bladed, 2,240mm propeller. 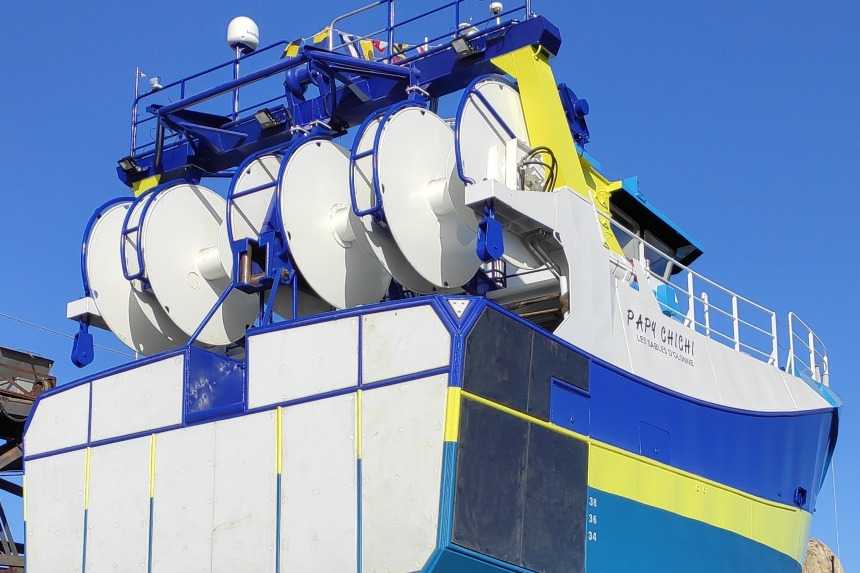 The fishing equipment includes three Bopp 10-tonne trawl winches, a five-tonne TCH 11 MF gilson winch, and four net drums for fishing anchovies, sardines, and groundfish depending on the season. For improved operational flexibility, the deck equipment may also be controlled from a console in the wheelhouse.

Papy Chichi was delivered in March 2021, five months after sister Les Chignolles joined the La Belle Alliance fishing fleet. Owner Jérémy Chagnolleau said the two vessels will sail as a pair to trawl for sardines for four to five months in a year while the remaining months will see them being put to work catching other species such as cuttlefish and squid in the same waters off Vendee and further out in the Bay of Biscay. 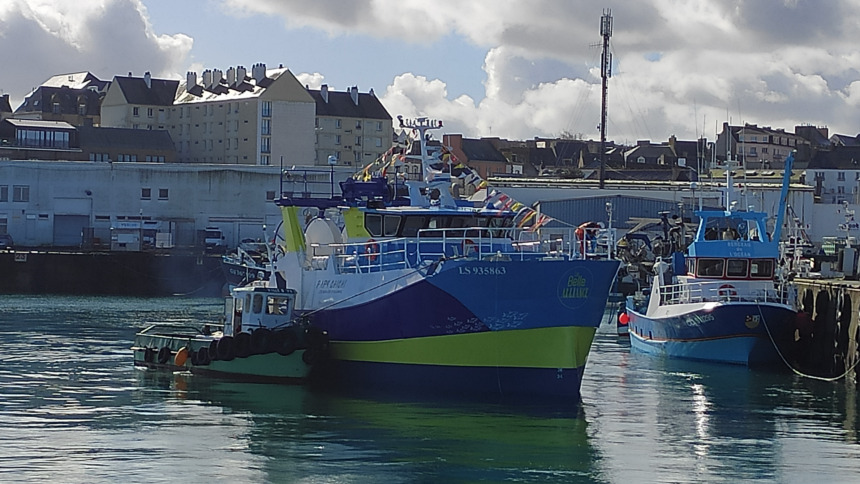 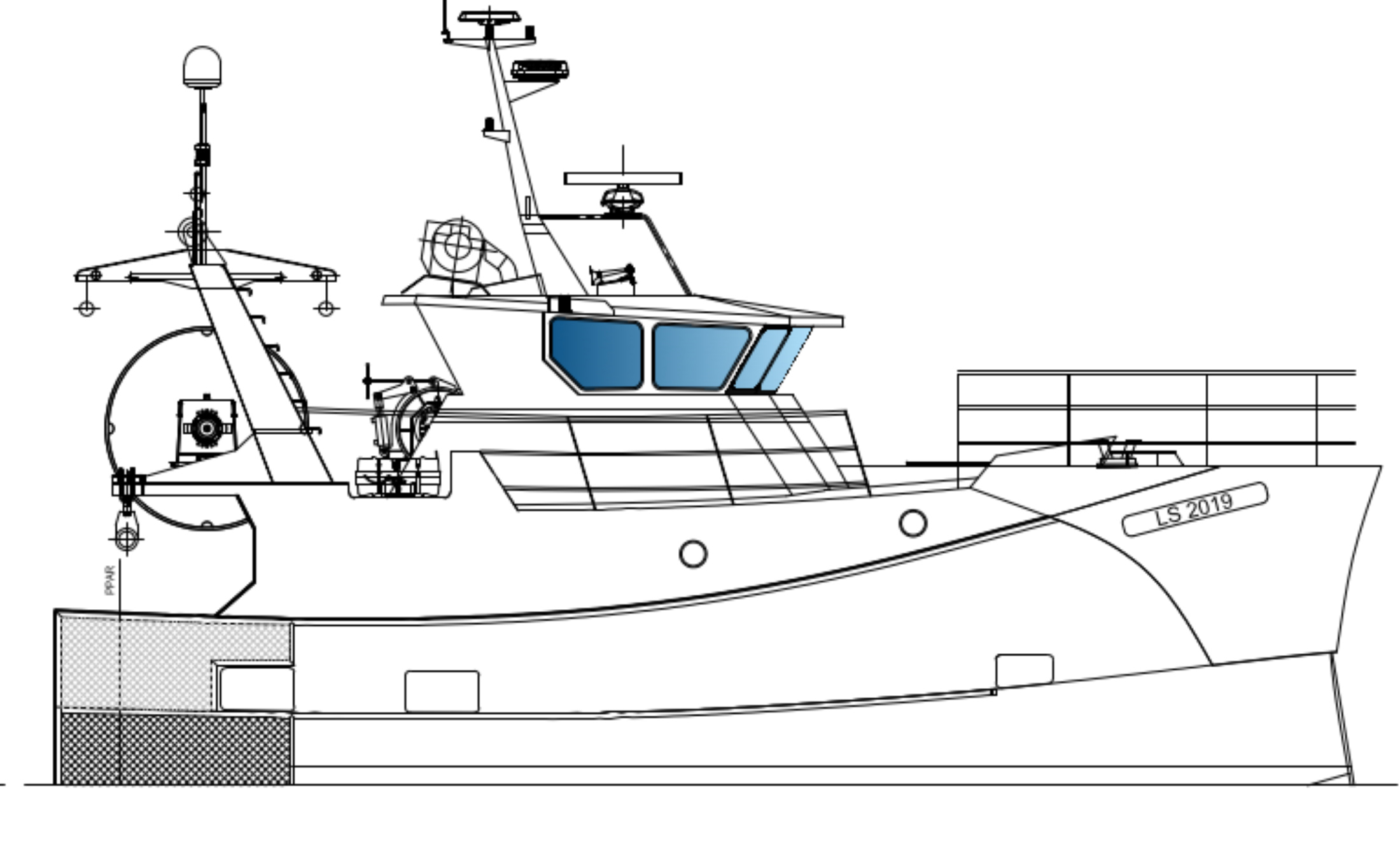