Western Australia-based seafood company Austral Fisheries recently took delivery of a new multi-purpose fishing vessel for operation in the Southern Ocean. The newbuild has been christened Cape Arkona after a cape on the German island of Rügen in the Baltic Sea.

Classed by Bureau Veritas, the newbuild has an LOA of 68 metres, a beam of 15 metres, a draught of 7.2 metres, and 26 cabins that could accommodate 40 crewmembers.

Equipped to carry out autolining, potting, and trawling, Cape Arkona is perhaps most notable for being capable of performing all three different fishing activities on a single trip if necessary – one of the first vessels in the world to be designed as such. This makes it easier for the owners to achieve fishing quotas while making fewer long-distance voyages.

The planning and design work for Cape Arkona began in late 2016 and the actual construction followed less than two years later. The design work was done by Norwegian naval architects Skipskompetanse with the close cooperation of Austral representatives who had spent considerable time on-site in Norway as the vessel gradually took shape.

Marine Projects in Poland constructed the vessel’s hull while Norwegian shipyard Båtbygg was responsible for its completion. This is Båtbygg’s first newbuilding order from Austral, though the two companies have had years of collaboration on various fishing vessel rebuild projects. 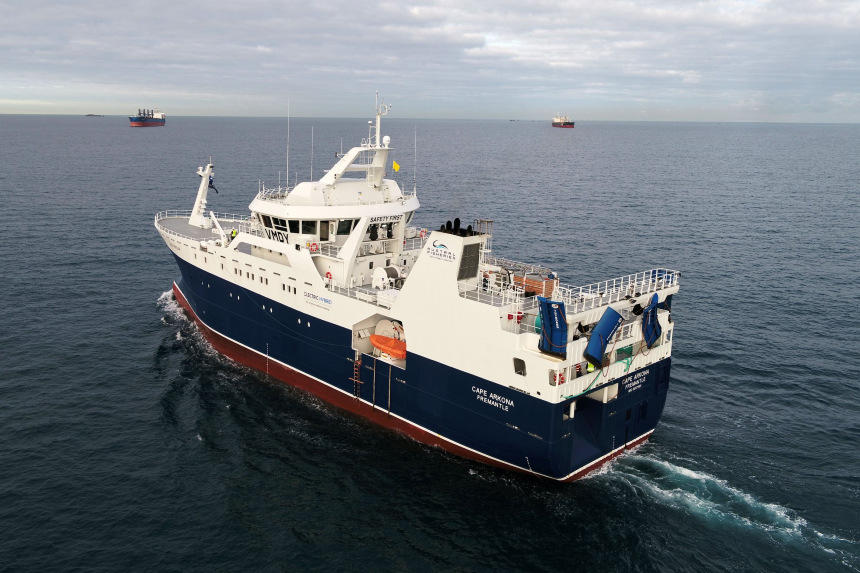 Since Cape Arkona had been intended from the outset to perform three different fishing methods without having to undergo considerable – and costly – modifications on an ad hoc basis, it came as no surprise to both Austral and Skipskompetanse that the biggest challenge was in ensuring the vessel would be capable of a broad operating profile that also involved large differences in power take-offs on the propellers and the onboard equipment.

To optimise the vessel for these operations, a somewhat non-traditional propulsion system with an associated battery solution has been selected. This came in the form of a “father-son” configuration of two Caterpillar main engines of 1,825 kW and 1,250 kW output, respectively, connected to a Brunvoll gear/propeller plant.

In addition, there are two shaft generators connected to the same gear, and one of these generators can be run as an electric propulsion motor. This allows power to be adapted to actual consumption, reducing running time and optimising load profile on the main engines while reducing the diesel fuel consumption as well.

To further reduce consumption and increase safety, Austral had opted for a Corvus Energy “peak shaving” battery solution that also acts as a safeguard in the event of a blackout. The batteries also absorb regenerated electricity from trawl winches and re-distribute this to other systems on board as needed.

This highly dynamic propulsion arrangement not only guarantees that Cape Arkona would have a speed of 10 knots and the ability to easily switch among various operating profiles. It also ensures that the vessel is environmentally friendly in line with its owners’ goal of achieving carbon neutrality in its fishing activities in the Southern Ocean and in the waters off the northern coast of Australia.

Lastly, to ensure the comfort and the well-being of the crew during extended operations far from shore, the vessel has a large and spacious mess area that also serves as a recreational lounge.

Cape Arkona arrived in Fremantle in August following a delivery voyage of 45 days from Båtbygg’s facilities in Måløy in western Norway. The newbuild departed on its maiden operational voyage under its new owners the following month, and it has since been put to work fishing for icefish and Patagonian toothfish in the Southern Ocean.