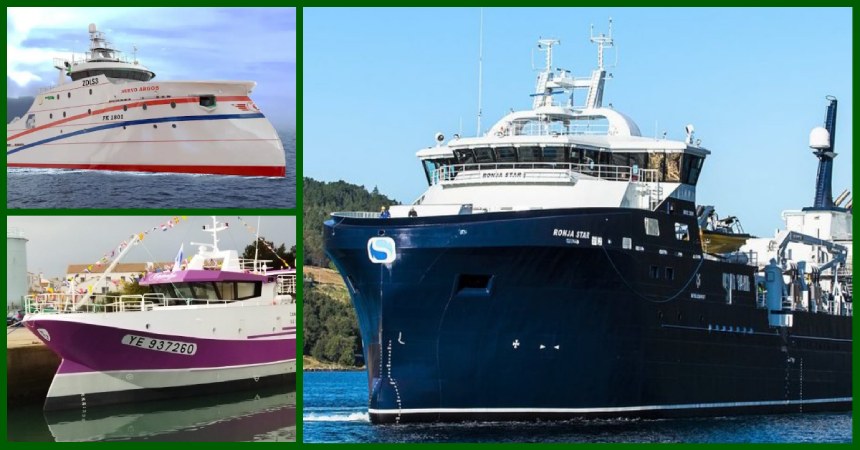 Recent deliveries include a new Norwegian-owned wellboat for operation in Scotland and a French-owned longliner designed for the English Channel. Orders meanwhile include two landing craft for a Scottish aquaculture company and a freezer trawler that will catch squid in the south Atlantic.

Bakkafrost Scotland (formerly The Scottish Salmon Company) recently welcomed a newbuild wellboat that will support its fish farming activities in the Western Isles.

The 87-metre Ronja Star was built by Norwegian shipyard Myklebust Verft as the fifth wellboat in a series for local operator Solvtrans. Design work was provided by Kongsberg.

The vessel boasts diesel-electric propulsion and a total hold capacity of 4,000 cubic metres.

The Armement Cooperatif Artisanal Vendeen (ACAV), a fishing cooperative that operates off France’s western coast, has taken delivery of a new gillnetter/longliner from local shipyard Piriou.

Camelys will be operated by Adrien Delavaud and will be homeported on Yeu Island. Its area of operations will cover the Bay of Biscay and the English Channel.

The 21- by seven-metre vessel has a hold capacity of 60 cubic metres and is powered by an IMO Tier III main engine.

The vessels will utilise a variant of the hull forms used by the Mowi aquaculture workboats Geraldine Mary and Helen Rice. Modifications will include a revised arrangement to match the specific operating profile of Mowi Scotland.

Skagen Ship Consulting will be responsible for the delivery of the design and equipment package while the vessels will be built in their entirety at Etkin Marin in Turkey.

The 85-metre-long vessel will be used mainly for fishing and processing of Patagonian squid in the waters of the Falklands.

The vessel’s refrigeration plant will use ammonia as the main refrigerant, thus reducing reliance on potentially harmful fluorinated gases.