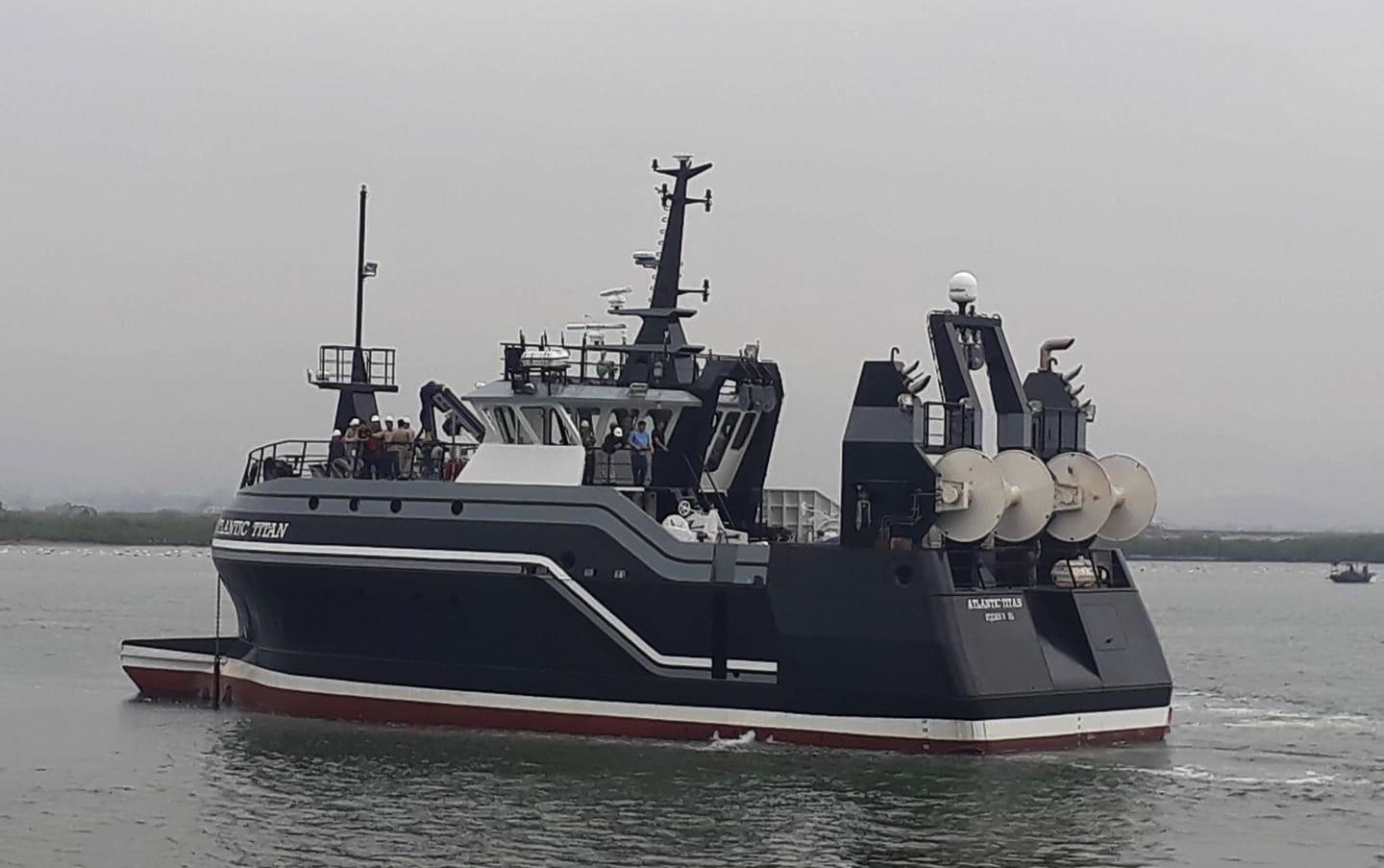 A new 27-metre fishing vessel for the Piercy family of Newfoundland, Canada, has just been completed and handed over. The vessel, built in Vietnam and designed and kitted by Macduff Ship Design, has the capability to fish for crab and to trawl for demersal fish.

The vessel combines some traditional features with a distinctive modern design and layout and the latest in fishing technology. The vessel works the traditional local style of pot for crab fishing using a hydraulically operated main deck side hatch and hauler to starboard. This is combined with the ability to completely close this main deck area mid-ships, allowing it to convert to a full factory processing deck for modern fish processing and on-board freezing.

Crab fishing is completed using a hydraulic hauler, which is monitored from an offset helm position at the starboard side of the wheelhouse, with full depth windows positioned to offer a commanding view of both the hauling station and incoming line. The catch is released for sorting and then fed into two large 50,000-litre refrigerated salt water tanks to keep the catch in prime condition. 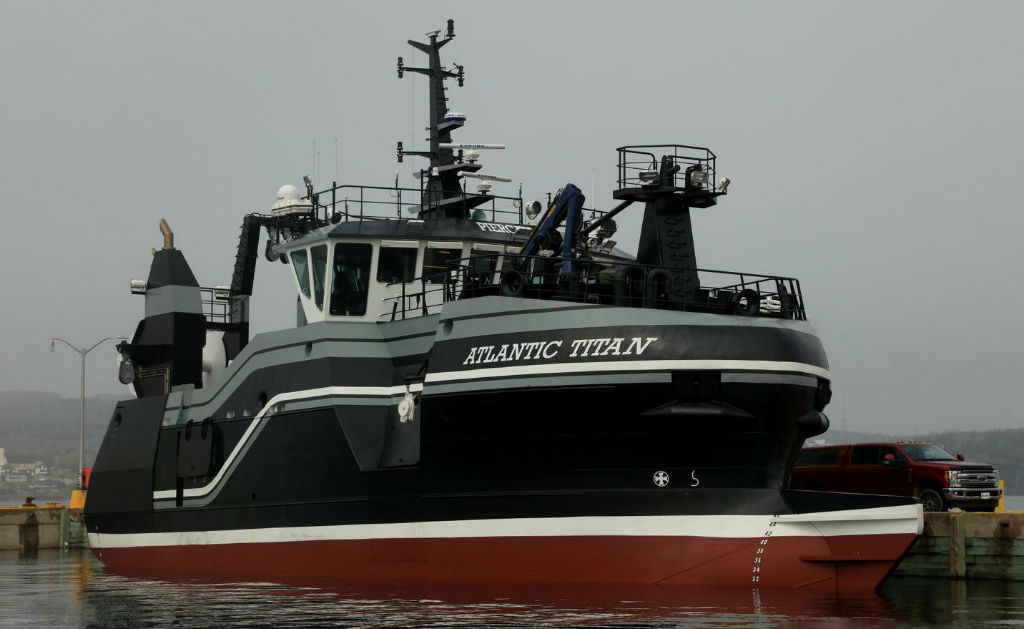 Trawling for demersal fish is conducted from the large trawl deck located on shelter deck level behind the forecastle accommodation and wheelhouse. The whole of the trawl operation is monitored from a designated position at the aft end of the wheelhouse with full height windows which allows the skipper to have a clear view of all fishing gear at all times.

The Bopp-supplied trawl winches and net drums allow for single net trawling with the catch being taken aboard aft, up a stern ramp and through a hydraulic cod end hatch into a portable hopper on the processing deck. This deck can be completely closed during trawl operations with deck pumps keeping the space dry.

The processing deck is reconfigured for trawling to include hopper and processing equipment along with the fitting of three plate freezers supplied with the RSW system in an integrated refrigeration system by Paumier Marine. Once processed and frozen the catch is stored in the large 160 cubic metre freezer hold. The two RSW tanks can also be reconfigured with the removal of large portable panels to give an enlarged hold space with a total hold capacity of over 260 cubic metres. 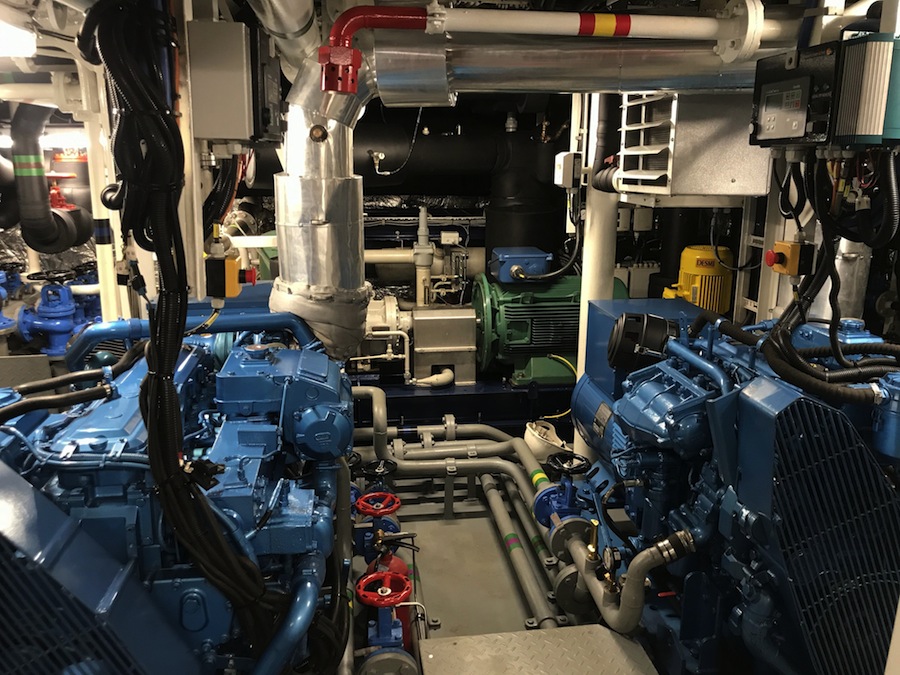 The vessel is fitted with a Yanmar 6EY 17W main engine rated 749 kW at 1,350 rpm and is coupled to a Reintjes WAF 563 reversing gearbox with reduction ratio of 5.42:1. This drives a 2,000mm diameter fixed pitch propeller fitted in a nozzle, all supplied by Kort Propulsion. The vessel achieved a healthy 10.5 knots on trials.

The hull form, along with a high-lift rudder designed by Macduff Ship Design and bow thruster also supplied by Kort propulsion, gives the Atlantic Titan the excellent manoeuvrability required for the day-to-day fishing operations. The vessel is also fitted with bilge keels for roll reduction.

Below deck, when combined the fish hold and tanks have a capacity for 170 660-litre seaplast tubs. The main fish hold, positioned forward, has the ability to either refrigerate catch or fully freeze depending on the type of fish targeted and the duration of the voyage. Aft of the main hold and roughly amidships are two large 50-tonne refrigerated seawater holds which hold crab but can also be fully opened using hinged portable panels to augment the fish hold capacity. The entire refrigeration system was designed and supplied by Paumier Marine to the owner’s requirements.

Below the fish hold are positioned two fresh water tanks supplying a total of 23,000 litre of water for domestic systems on board. The vessel also has four main fuel tanks and two service tanks giving a total fuel capacity of 65,000 litres, which affords the vessel an extensive range. 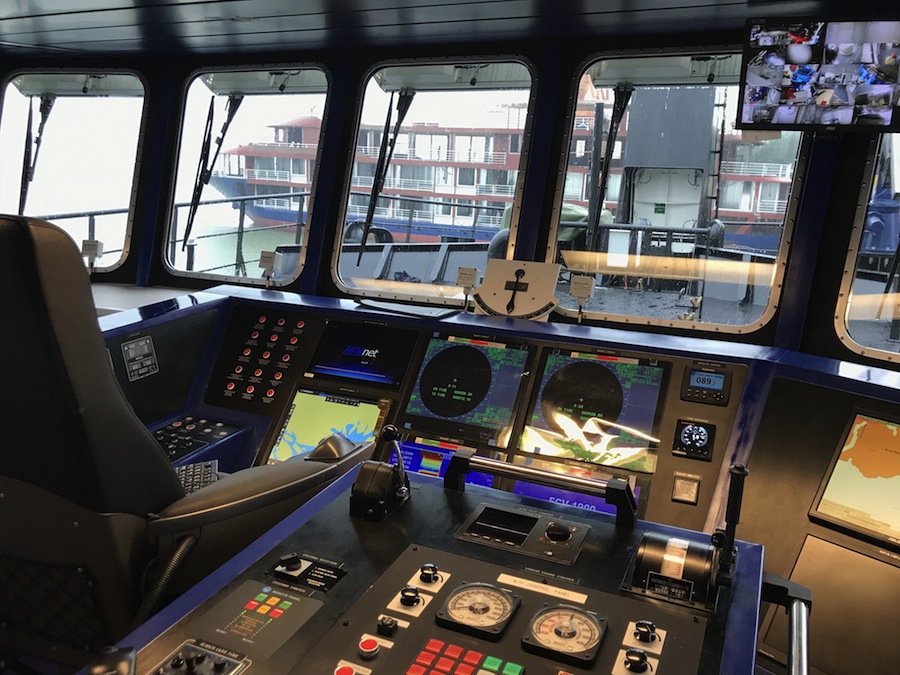 The crew accommodation comprises three four-berth cabins and two single berth cabins as well as WC facilities, all positioned on the shelter deck below the wheelhouse. On the main deck level forward there is a large mess and lounge area which allows for comfortable seating and an area where the crew can relax and watch TV. The comprehensive galley is accessed from the mess with separate provisions store and is fitted out to a modern and high standard with commercial quality equipment.

Following successful sea trials completed in Vietnam the Atlantic Titan was loaded as deck cargo onto a cargo ship. The delivery voyage took her across the Pacific through the Panama Canal and up the Eastern seaboard of America to be offloaded in Halifax before a short transit to the home port of Saint Johns Newfoundland. Here she underwent final commissioning prior to formal handover to the owners. 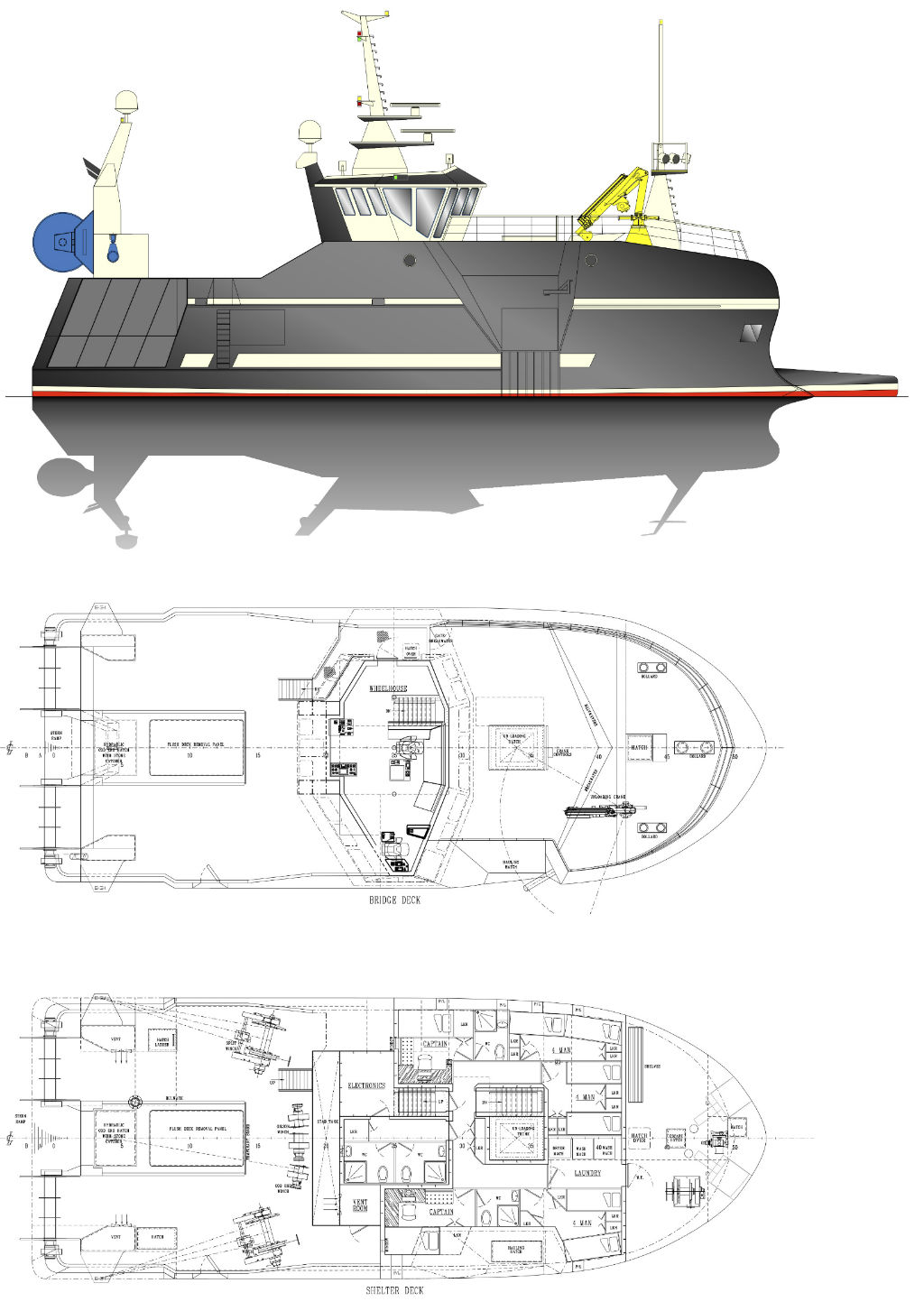 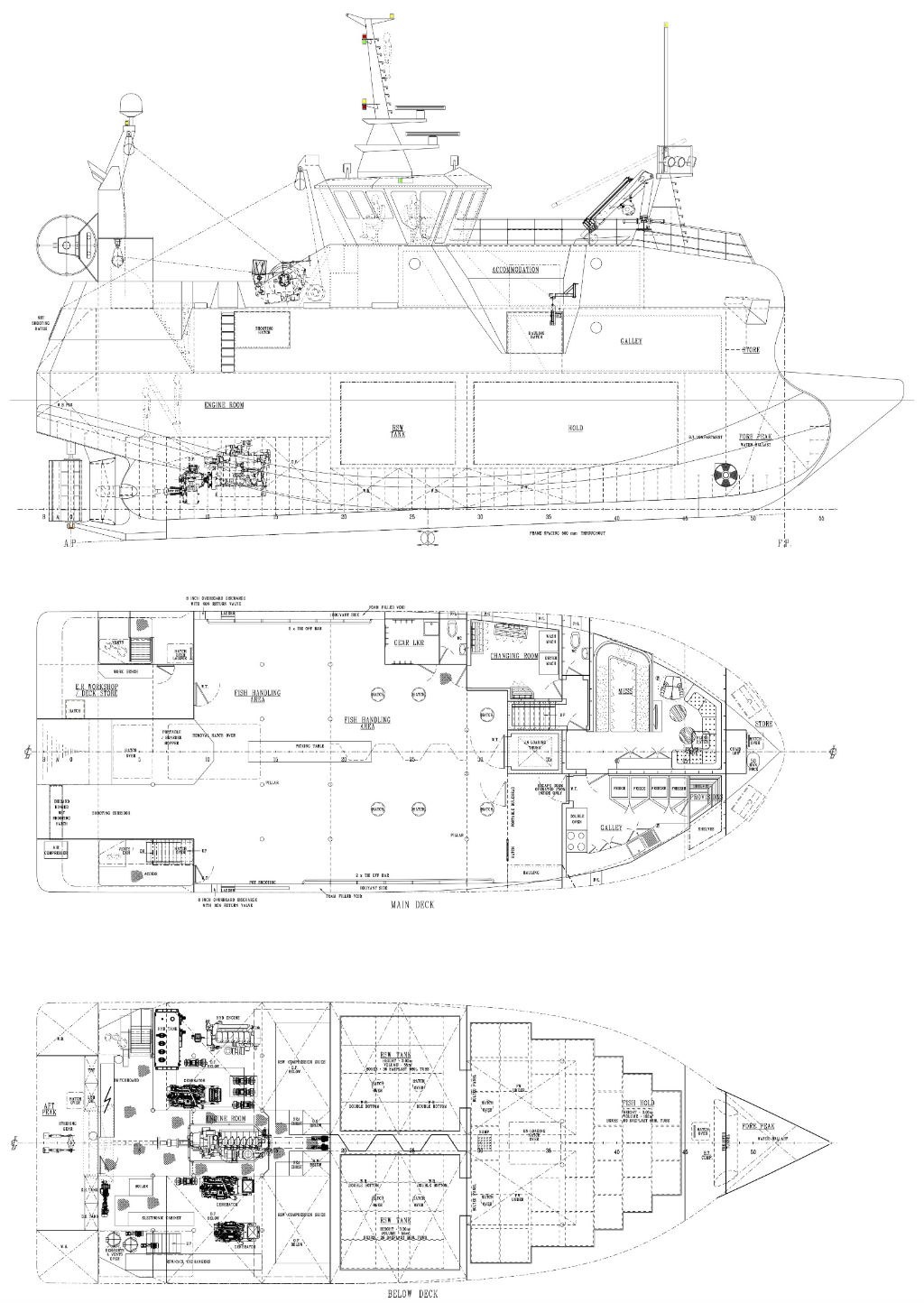