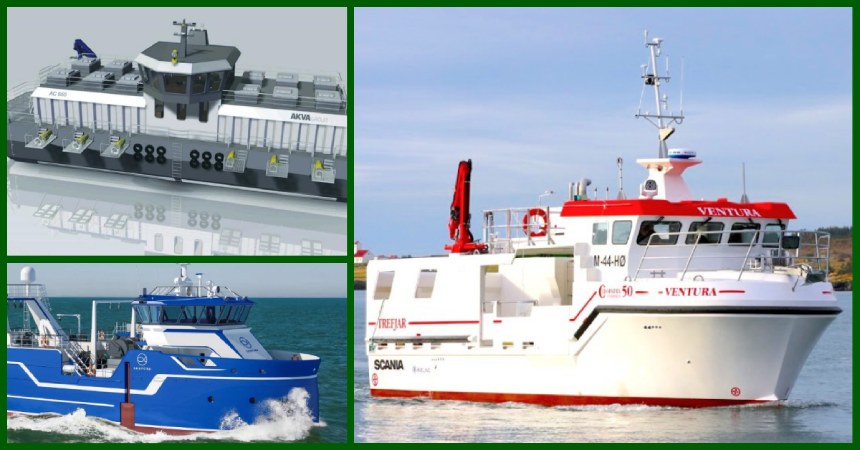 An Iceland-based builder hands over a new netting boat to an owner in Norway and a crab boat for a Russian Far East operator hits the water. Orders have meanwhile been placed for a scampi vessel for a customer in New Zealand and a Norwegian-designed feed barge to be built in Estonia.

The newbuild, also named Ventura, measures 15 metres long and has capacity for 43 fish tubs of 460 litres each. Power is provided by a Scania D16 engine.

The accommodation spaces include three cabins with two berths each, a mess, a galley, and a storage compartment. The electronics suite meanwhile includes equipment from Furuno, Simrad, and Olex.

The Russian Crab Group has confirmed that its newest vivier crab boat, the future Kapitan Egorov, has been launched.

Once completed, the vessel will be operated in the waters off the Russian Far East. An ice class hull will ensure suitability even under extreme sailing conditions in the Bering Sea, the Sea of Okhotsk, and the Sea of Japan.

The vessel will measure 57.7 by 12.6 metres and will have two stainless steel tanks with a total capacity of 100 tonnes of live catch.

Sanford will operate the vessel in the Southern Ocean following its delivery in 2025.

The vessel will have diesel-electric propulsion and an onboard freezer.

Norwegian aquaculture support company the AKVA Group has received an order for a new feed barge to be delivered to an unnamed customer in Northern Norway.

The barge will measure 34.5 by 12 metres and will have 10 feeding lines and a hydraulic crane with winch. AKVA’s proprietary integrated control system will also be fitted to provide operators will full access to control all onboard subsystems.

Delivery of the barge is scheduled for September 2023 following completion in Tallinn, Estonia. It will commence operations under its new owner in October.