Waterdance Fishing, a family-owned fishing company and subsidiary of UK-based Greendale Group, has taken delivery of a new vessel that will be used to catch hake, turbot, cod, haddock, pollock, monk, and other mixed fish.

Built by Parkol Marine Engineering of Whitby to a design by Ian Paton of naval architects SC McAllister and Co, Amanda of Ladram has an LOA of 20.4 metres, a moulded beam of 7.7 metres, a moulded depth of 4.06 metres, and a hull with a round bilge design with a transom stern, a bulbous bow, and soft nose stem. The steel hull is topped by an aluminium aft wheelhouse. The non-weathertight, full-length shelterdeck and the mast are also fabricated in aluminium.

“This vessel was quite unique from the start due to its being the first newbuild gillnetter of its size to join the UK fleet in over 15 years,” the designer told Baird Maritime. “It was based on the newbuild trawler Reliance III but with modifications to the design to suit the layout required for gillnetting.”

The designer added that using the example of Reliance III as a base for the hull proved prudent as the design offered a wider beam to allow for more space within the vessel for equipment and accommodation.

“Due to the difference in fishing styles (trawling vs gillnetting), the shelterdeck design needed significant changes to suit the change in fishing method. This included a complete redesign of the aft shelter, which was increased in height significantly and constructed from aluminium, as opposed to steel, to keep the weight to a minimum.”

The layout places the 500-box capacity fish room with its Geneglace icemaker forward, with the engine room amidships and accommodation for up to ten crew and passengers aft, along with the compartment for the Wills Ridley steering gear. A Thistlelift MFB8 crane is mounted on the shelterdeck for landing catch.

At main deck level the hauling position is on the starboard side, with a Spencer Carter hauler arranged to swing into its working position as the hydraulic hatch opens. The catch handling hoppers and washer are located on the forward deck, with fishing gear taken aft through a channel leading under the wheelhouse on the port side.

The superstructure amidships contains the galley, mess area, washroom and oilskin store. Fifteen net ponds are arranged under the aft shelterdeck, with capacity to hold all of the vessel’s trammel and gill net gear. A John Leach net flaking system capable of traversing in any direction runs on rails above the pounds to place the net-op net flaker where required.

“The propulsion setup uses a controllable pitch propeller to reduce the need to be in and out of gear all of the time, as would be the case with a fixed pitch propeller. This is key for a vessel that will not likely be moving more than one to two knots when hauling the gillnets.” 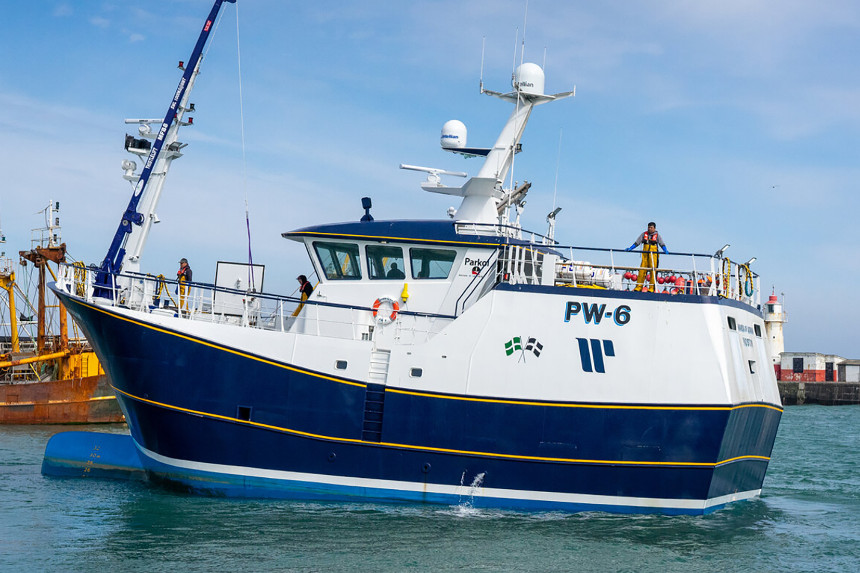 For electrical power, Amanda of Ladram relies on a pair of Volvo Penta D5A-BTA 100kVA generator sets, which are run alternately to adequately fulfil the vessel’s energy requirements.

The wheelhouse boasts a unique design with a rounded roof/canopy and large forward windows for visibility. Included in this design was the addition of a short wheelhouse mast to house the antenna, radar, and other equipment, which were also rounded in nature to compliment the design of the wheelhouse. The structure itself was fitted to the vessel offset 0.5 metres to starboard from the centreline to allow the skipper/coxswain a better view down to the hauling hatch when bringing in nets.

“One of the more difficult challenges during the design was the styling of the wheelhouse roof,” the designer told Baird Maritime. “We wanted to ensure that we could achieve the rounded style with aluminium plating. After a few rounds of varying designs with alterations to the curvature of the roof, we finally settled on a shape that we believed could be constructed from pre-formed aluminium plating.”

The wheelhouse systems have been supplied by Echomaster Marine, with a selection of AG Neovo 22-inch and 19-inch displays for the electronics and an E-Logbook PC. The fishfinder is a Hondex HDX-121 Black box chartplotter/echo-sounder with dual 50Hz and 200kHz frequencies and seabed mapping. The plotters are an Olex 3D seabed chartplotter with AIS and HT modules, and a Maxsea Timezero, supplied to Waterdance by Globe Marine, with PBG and AIS modules.

The communications package includes an Icom IC-M423G VHF DSC radio, a Sailor 6210 VHF set and a JRC JSS-2150  MF/HF DSC set. The GM1600E GMDSS liferaft radio is from Icom and there is an ICS NAV6+ paperless Navtex receiver. The V60Ka band VSAT antenna system for internet at sea with wifi is from Intellian. The vessel also has a 16-channel CCTV system with 4MP cameras mounted in key working areas, plus a hull-mounted camera providing a view of the propeller and rudder.

Echomaster Marine supplied the VEP8 GPS EPIRB and the Phontek 10 station Intercom system for internal communication on board. The I6PE 60cm Satellite TV antenna with messdeck freesat TV and bluetooth soundbar is an Intellian system.

Amanda of Ladram now operates in the South West Approaches of the UK (Devon/Cornwall) with its homeport being Newlyn. 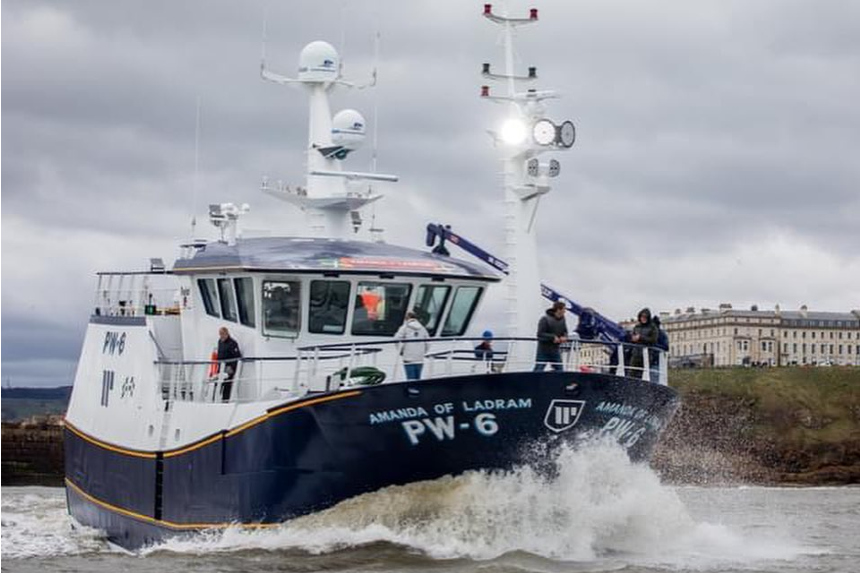