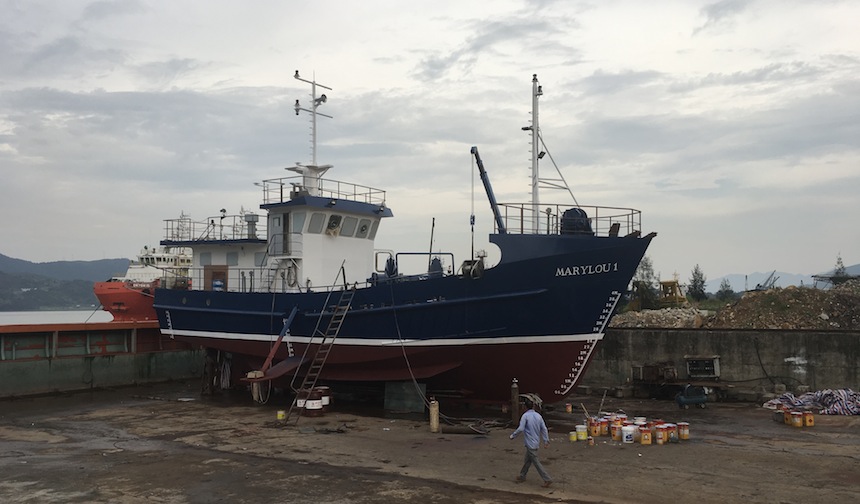 When Australian shark fishermen Jamie Papas and his father, Jim, decided to invest in a new fishing boat, they took the bold step of having it purpose-built in China – and then sailed it all the way back to Australia.

Based in San Remo in Gippsland, in the south-eastern state of Victoria, the pair have 40 years’ experience fishing the waters of Bass Strait between Victoria and Tasmania.

Drawing on this knowledge, and incorporating the best features from previous vessels they have operated, they designed a multi-purpose vessel adaptable to different catches and fishing methods. Having come up with their ideal design, they then contracted a boat builder in China to make it for them.

The result is Marylou 1, a 23.9-metre steel-hulled, heavy weather boat, currently being used for gill netting but also suitable for crabbing, scalloping or longlining.

A key aspect of the design and build process was working with the Australian Maritime Safety Authority (AMSA) and the Chinese Classification Society (CCS) to manage the certification process using China-based marine surveyors. It was the first time that AMSA and the CCS have cooperated on the certification for the construction of a fishing vessel.

Based on AMSA’s advice, the vessel was registered as a Regulated Australian Vessel (RAV), rather than as a Domestic Commercial Vessel, enabling it to operate in international waters. As a result, when arrangements to transport the vessel to Australia fell through, Jim Papas was able to hire a crew in accordance with international maritime requirements and bring Marylou 1 home.

The voyage took five weeks to reach San Remo – three weeks from China to Cairns where the international crew flew home and another 12 days down the east coast. Along the way Marylou 1 encountered some rough weather, including typhoons, but the crew – many of whom had never worked on such a small boat – were impressed with her sea-handling abilities.

“They couldn’t believe how stable the vessel was in big weather,” said Jim.

Because of the preparatory work done in conjunction with AMSA during the build, no further modifications were required in Australia before the vessel went straight to work.

The father and son team are keen to pass on the knowledge they’ve acquired to other fishermen looking to undertake similar projects.

“We successfully designed, built and delivered the project in total compliance with all marine orders,” said Jamie.