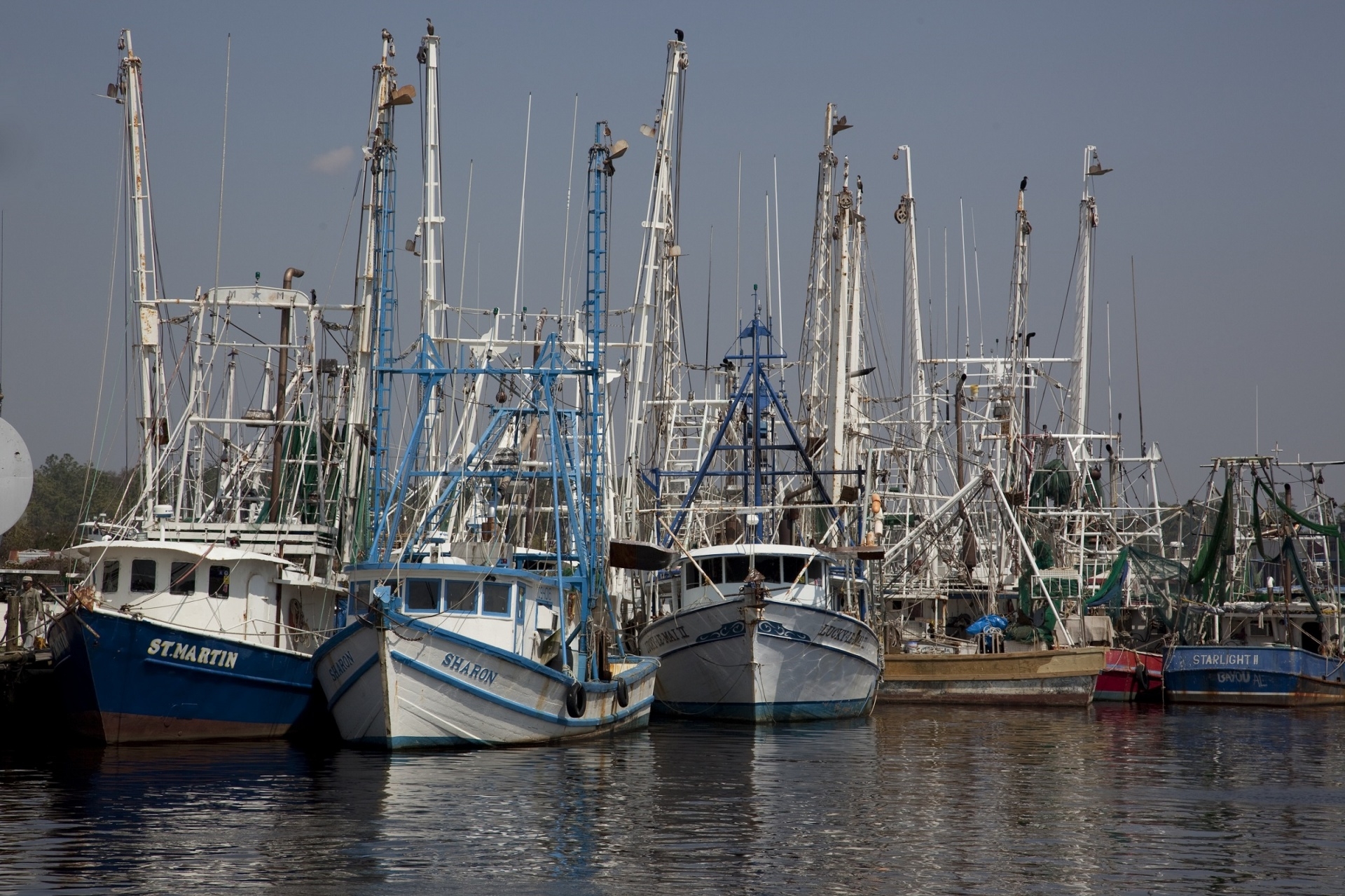 As regular, long time readers may realise I have a bit of a soft spot for the commercial fishing industry. And, no, that soft spot is not my stomach as a result of over-indulgence on fish and chips. Thanks for noticing and pointing that out though.

To be honest I’m not sure where it comes from (the interest, not my belly) but it’s at least in part from reading stories about some of the impressive fish catchers that were built back in the 1990s. Some of you may remember Work Boat World magazine’s sister title, Fishing Boat World, which covered those vessels across the globe and across the full range of sizes and shapes.

Fishing Boat World is long gone, at least in print form, and perhaps that is why I’ve heard less about the boats that do my fishing for me. Or perhaps, as I suspect, the demise of the magazine just reflected the contraction of newbuild activity in that field.

“We don’t need to measure data to tell you,” they said. “It’s as plain to see.” I was quite surprised by this as the grandkids are usually polite. Perhaps I should have asked prior to Christmas.

Having sucked my gut in, I told them to watch their tongues and see what they could find out about fishing boats.  A couple of hours later they came back with this graph. 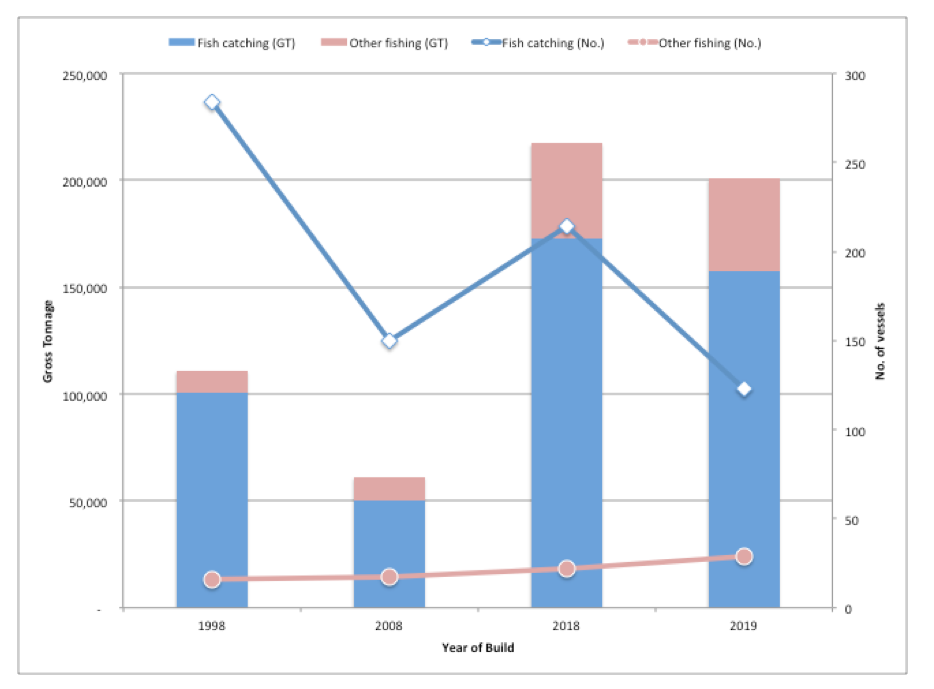 Aft Lines had a gut feeling the fishing boat market had bounced. The gut was at least partly correct

Naturally I had to get them to explain it to me, so just in case anyone else out there is as terrible with data as I am, the basic gist is this: for fishing boats with IMO numbers – which is clearly not going to include one heck of a lot of domestic vessels – both the number and tonnage built was much lower in 2008 than 1998. Step forward a decade to last year and, well, we can see that numbers have jumped (that’s the lines) but the tonnage has exploded. Boats are getting bigger and, presumably, more expensive. This year looks likely to be similar in tonnage terms but smaller in number. The data analysts suggest that that might be a bit misleading as the smaller boats that eventually get built this year may be yet to earn themselves an IMO number.

Begrudgingly, the data analysts agreed that my hunch seemed to be correct. “I can spot the trends,” I told them.  I may have been a touch smug.

After laughing for a couple of minutes, they said I was wrong. “What makes you say that, look at your data!” I replied. “Look at your clothes!” came the reply, with more laughter. “And let’s be clear these are four years of data,” the continued. “Isolated moments in time. You can’t trend off four data points especially when it looks like a saw tooth.”

There was no way I was going to pay them. After all, they wouldn’t exist if it weren’t for me. Luckily, I still control1 the wifi password in our house and as they were stuck with me for the weekend the threat of changing that and denying access to anything beyond our four walls was enough to get some more interesting info from them. Well I think it is interesting.

Here is what they gave me. 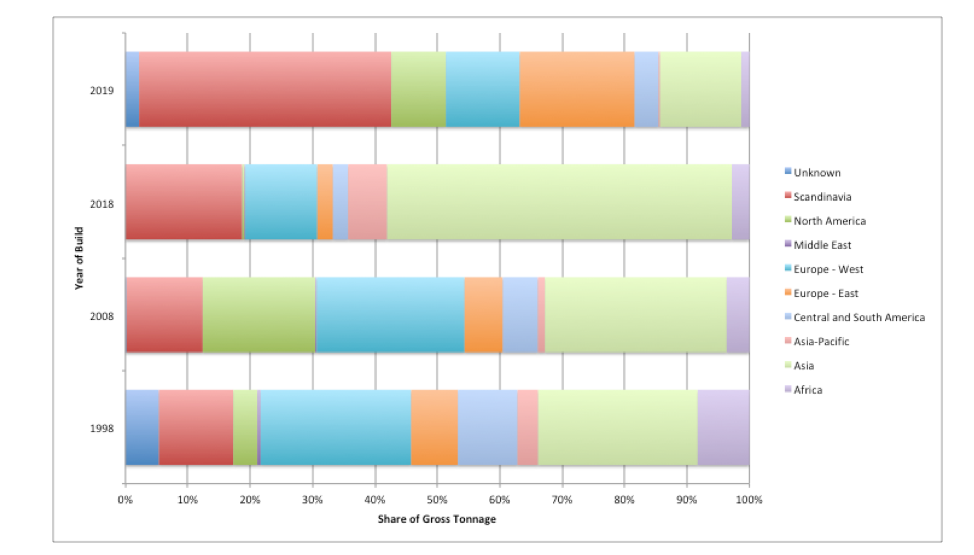 In my day this was called a TB test pattern. Apparently the modern term is 100 per cent stacked bar chart. At least I know what Flag means

“This tells you who owns the boats, Old Man,” they said. They were wrong, of course. I looked over their shoulders and the geography was clearly worked out on the basis of Flag State. So while I may not know how to make a pretty picture at least I know that when it comes to  country of origin labelling, in shipping the flag it flies may bear only a passing resemblance.

I asked if they wanted an explanation. They grunted, which I took as a “no”. I’ll assume you, dear reader, don’t need one. That said, it’s probably not a bad proxy – especially given that Liberia and Bahamas hardly rate a mention here.

So what I guess jumps straight out is the massive share of recent fishing boats that are flagged in Asia. A tick over 55 per cent of the total for boats built last year. Back in my days reading Fishing Boat World, in terms of the oceangoing boats featured it was predominantly Scandinavia, Western European, and South American ownership to the fore.

The 1998 data sort of supports that, though one needs to remember that this is current flag data – not the original flag – and there will surely have been a fair bit of sale and purchase and reflagging in the past 20 years. Case in point: some 10 per cent of the 1998 vintage fleet is flagged to Africa.

Back to recent times. Fifty-five per cent is a big number in and of itself but what is more astounding, at least to me, are the gross numbers. If you take that 55 per cent and look at the earlier graph you get a big share of a big number. It’s so big, in fact, that the gross tonnage of fishing boats flagged to Asian countries last year – some 120,000GT – is nearly 10 per cent more than the global gross tonnage for 1998, and essentially double that global figure for 2008.

So it seems the Fishing Boat World didn’t die. It just had a break before moving to Asia. Of course, my data analysts warnings about judging trends should be heeded. The 2019 data would suggest a resurgence from Scandinavia and Eastern Europe, and that Asia has fallen off a cliff. It’s only February though.

1I use the word loosely. I don’t know how to change it but they don’t know that, so the important thing is that they think I can….