The origin of tonnage for vessels had to do with the number of barrels of wine (tuns) that a boat could transport across the English Channel.

Officials measured the accrual volume of the cargo hold. Vessel owners complained that they were measuring from the ship’s planks rather than the inside of the frames. They argued, rightly, that a large keg of wine wouldn’t fit in the space between the frames. The official measurers were directed to measure from the inside face of the frame.

As a writer of new boat descriptions over the past many years, I initially focused on the form and function of the new boat, and I still do.

Unfortunately, some of the most interesting aspects of a new boat are often how the designer and builder worked with regulations to achieve maximum deductions of volume for tonnage measures.

These usually don’t go in my story and I haven’t always bothered to fact check them. But one very common practice in several nations will be the use of “tonnage frames” on metal boats – these are frames of much greater depth than would be required for hull strength. Since the volume measure is from the inside of the frame, it means that a much greater percentage of the hull-volume will be deducted.

In the most extreme case of this, a nation required that tugs over ten tonnes were required to have engineers. Everyone agreed that with modern engines this was not necessary on a 50-foot tug, but the regulation persisted.

Tonnage frames were keeping the measure under ten tonnes and getting most boats around the regulation, but when a designer decided to add more beam, this was not enough. However, the volume measure was also from the top of the engine room floor to the bottom of the deck beams. By installing the engine room floors over the engine that space was made negligible and the beamy new boat past inspection before the loophole could be closed.

“There is likely a political component.”

In the early 1980s, a friend of mine was building very nice Bristol Bay gillnet boats in Canada for export to the US. At 32 feet (9.8 metres), it wasn’t that hard to stay under five tonnes as required by the US Jones Act.

But then someone complained, and the inspectors tightened the interpretation of the measurements. My friend had a dozen of the boats rafted up for delivery in Seattle’s Lake Union. Fortunately, he was able to have his crew weld in some longitudinal bulkheads to get the necessary deductions of hold volume. The boats were passed but the builder decided not to build more 32-foot Bristol Bay boats

Much more recently, a US fisherman bought a big wooden seiner of over 70-feet (21 metres) in Canada. He was told that it would qualify for under five-tonne regulation. With considerable trepidation he waited for the official measurers. On arrival they went into the fish hold. It had been foamed and glassed. Bulkheads, to patrician the hold, protruded from both sides. A gap of several feet remained for the pen boards to be inserted. To the owner’s surprise and delight, the measuring officials took those several feet to be the distance between the boat’s frames!

They found the volume of the hold to be less than five tonnes. The boat, along with many other Canadian seine boats, was welcomed into the US and licensed by Washington State.

Things had changed since it was difficult to get a 32-foot gillnetter through. I don’t pretend to understand the complexities of these vessel transfers, but I do understand what I see. I can only conclude that, like so much else in fisheries management, there is likely a political component.

Limits on vessel length for domestic licensing, have led to some innovations. Many older steel boats have been sponsoned to increase the hold but retain the licensed length. In some cases, boats have been physically shortened in order to qualify. A piece of a raked bow can be cut off and a simplified extended roller for the anchor installed.

“Mariners are, by nature, an inventive lot”

Thirty years ago, I saw an old Alaskan limit seiner up on the ways. I noticed that the rudder stock had a forward rake. I was told that the boat had been built to meet the 58-foot (18-metre) limit, which at the time was measured to the top of the rudder stock. By giving it a forward rake, they saved nearly a foot in length with very little adverse effect on the turning. The stories of clever tricks are endless.

A Canadian was trying to transfer a 53-foot license to his 54-foot boat. Story goes that he took the boat out in the shipyard and jacked the bow up. When the guy came to measure, he took a level line from the stern to the bow, but the boat still came out to be 53-foot eight inches. The fisherman told the man to go have lunch. He then jacked the bow still higher. By the time the official returned it measured, on a horizontal line, exactly 53 feet.

There is a story of an even more enterprising fisherman. His boat was being measured for the first length-based license. The vessel owner got the boat ready for the official measurer. He suspended a plum bob from the bow and laid out a tape measure on the ground. The inspector his suspicions aroused, checked and found that the owner had cut four feet out of the middle of the tape measure. Not all plans work.

A common practice when a boat is too long to accommodate a smaller limited entry license, is to cut holes in the bow. Most boats have a watertight bulkhead called a collision bulkhead, just aft of the bow stem. By cutting holes in the hull on either side of the bow stem, the forward void is deemed to be no longer part of the hull. Similarly, at the stern, if the transom is moved forward and only the bottom plate with a little reinforcing is left then the hull is deemed to be shorter. 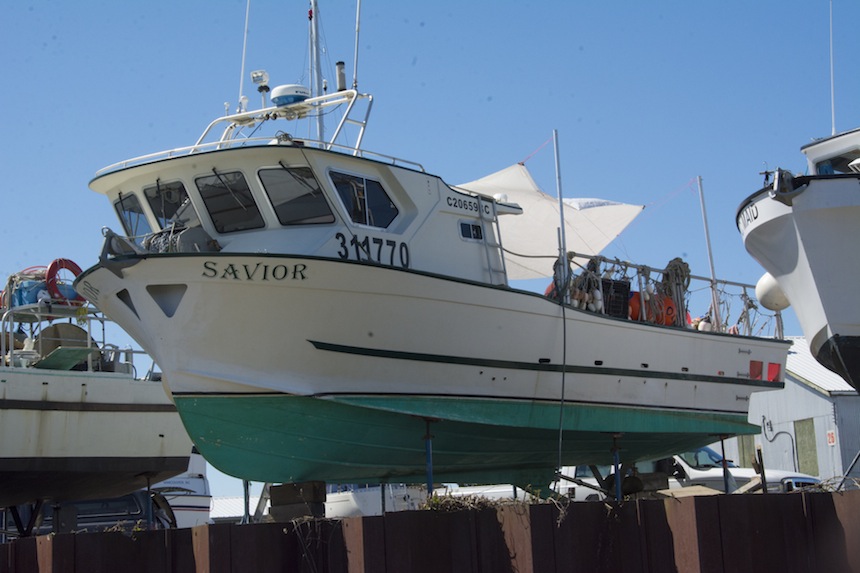 When I first learned about boat design, it was all about tradition, sea keeping, packing ability, and good handling in tidal currents. More recently I hear about “tonnage doors” and “tonnage frames” or the legal tricks for shortening a boat. Regulators try to plug loopholes, but mariners are, by nature, an inventive lot.