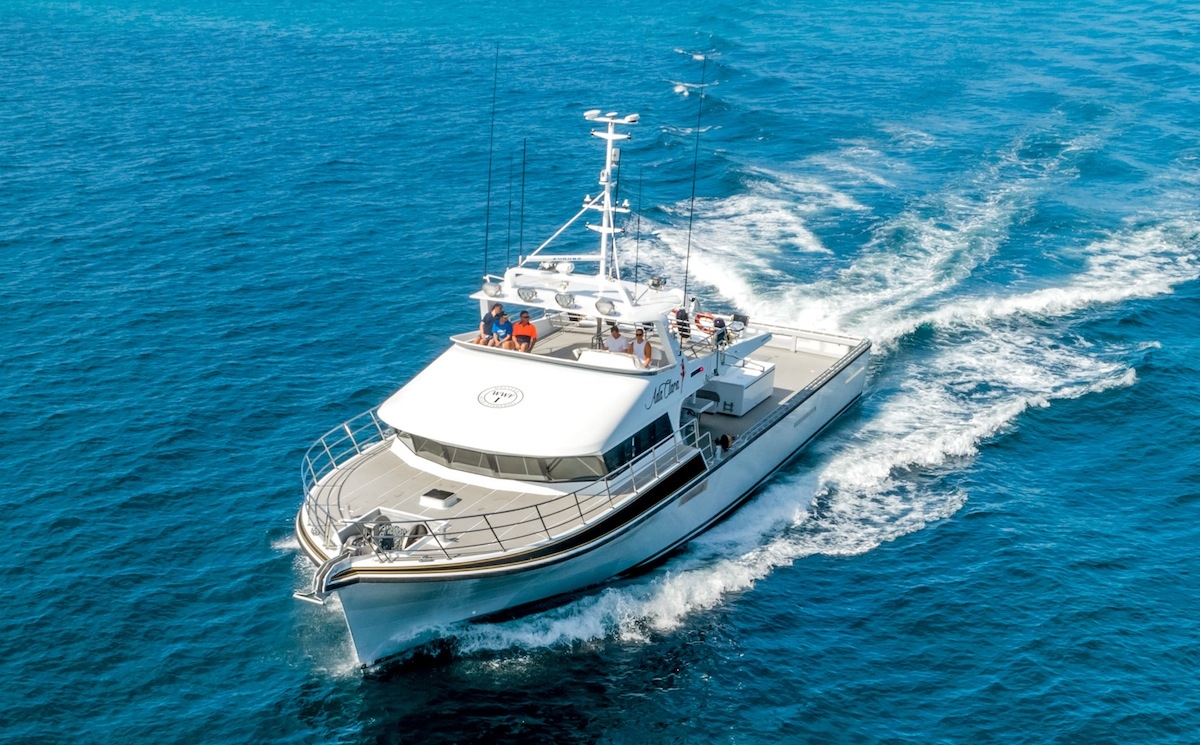 The Ada Clara is a long range vessel, and for reliability purposes features twin engines, twin hydraulic systems and a pair of power-generating units. She will operate in deep waters between Augusta in the south to Exmouth in the north, including the pink snapper fishery out of Carnarvon.

Sea trials off Fremantle attracted international interest with engineers from Yanmar’s Japan and Singapore offices on board to experience first-hand the performance of the 86-foot Ada Clara, built to service the state’s massive coastal deep-water wet fish industry. If required, builder Shoreline Marine Fabrication of Henderson has also constructed the boat to facilitate rapid conversion to operate in the Western Rock Lobster fishery.

In an industry that demands hard work and long hours; often in harsh, cramped conditions, it’s refreshing to see the thought that has gone into the Ada Clara to achieve a positive working environment, ultimately resulting in a fresh, quality, product in the market place. 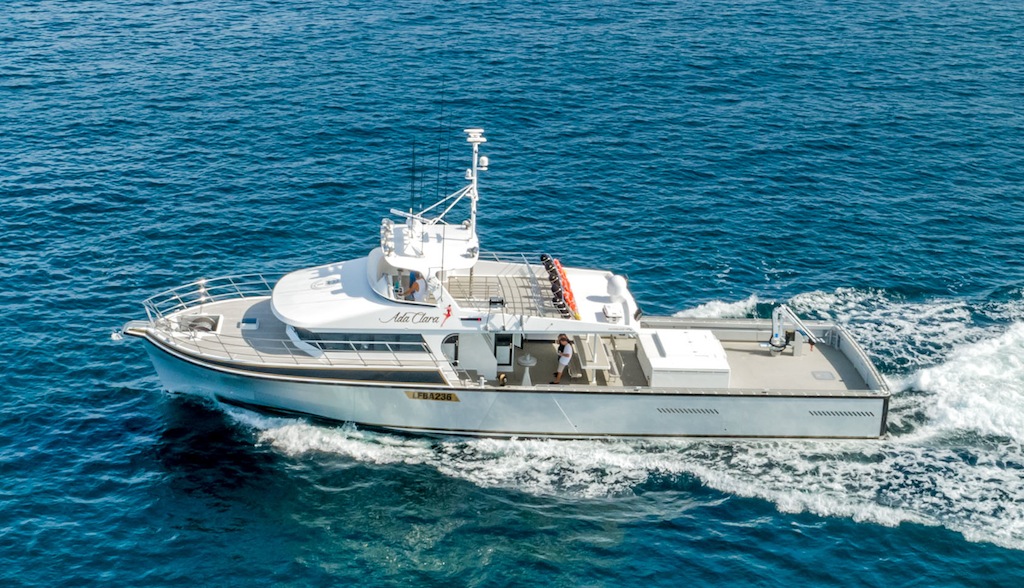 Designed by naval architect Gavin Mair and his team from Global Marine Design, the 65-tonne vessel is the product of decades of experience by all involved; designers, shipwrights, engine manufacturer and perhaps most of all, the owner who has been directly involved in the West Australian fishing industry for many years.

Shoreline Marine directors Brad Moseley and Brad Van Rongen supervised their team of 18 skilled tradesmen to custom build this “high spec” vessel to the owner’s every need, including superior accommodation and living facilities for its crew.

“It’s important to us that we work closely with the client,” said Brad Moseley. “This hull was a kit boat from Global Marine Design but when we reached a certain level we worked very closely with the owner who is a well experienced fisher and knew exactly what he wanted.

“For its size, it’s a low profile vessel even though it has a raised wheelhouse plus flybridge. It’s one of the biggest customised vessels Shoreline has built and most of the project has been completed in-house, with help from specialist contractors brought in to assist with some of the fit out, electrical and engineering aspects.”

With the ability to stay at sea for up to five days and the owner’s belief that, “a good crew is a happy, efficient crew”, the Ada Clara boasts a queen bed master cabin with ensuite, a second queen cabin and six single bunks.

A large common room with satellite television is starboard of the helm station on the raised deck that leads to a detailed galley and then to the accommodation on the lower level. It means the crew can still use the kitchen facilities without disturbing the skipper. Hygiene and wash-down stations are included in all work areas to help maintain a healthy crew.

Thirty three year old New Zealander Jonah Neho will be at the helm of this state-of-the-art vessel which topped 25 knots during initial sea trials off Fremantle.

“The vessel has excellent sea-keeping abilities and the motors proved to be super quiet – important features considering we’ll be clocking up around 1,500 hours a year out there,” said Jonah. 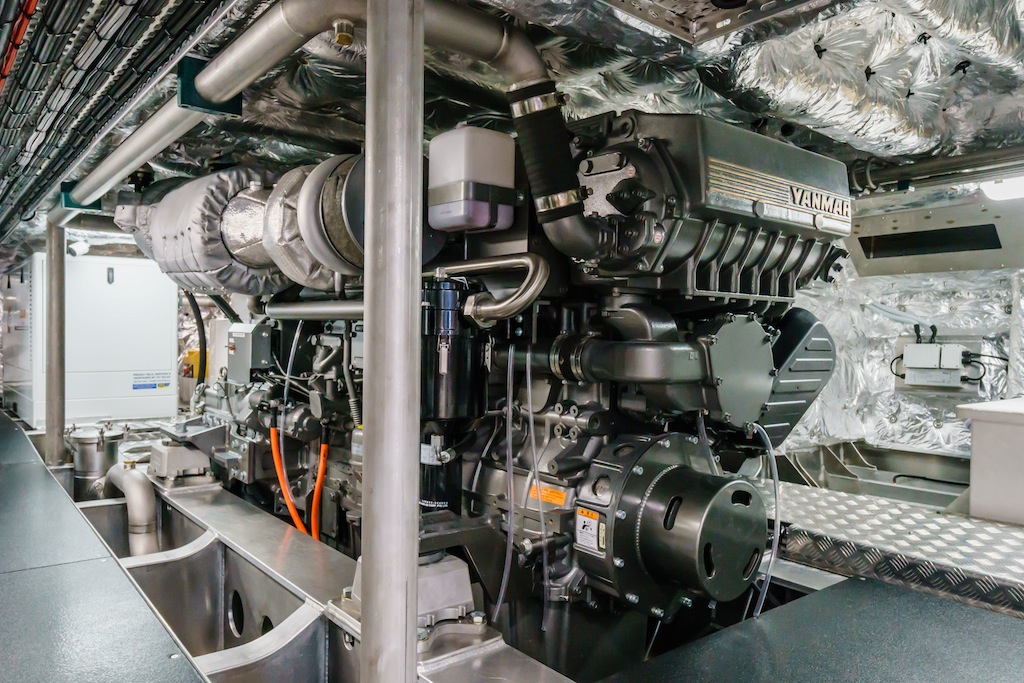 The vessel is fitted with twin 737kW Yanmar 6AYEM-GT engines featuring a new staggered injection nozzle combustion chamber design to minimise fuel consumption and optimise performance. Senior service engineer with installation company, Power Equipment, Jim Kibblewhite, said the new vessel did better through the entire rev range of the engines than most he had seen.

“Her waterline length no doubt helps with that. At 75 per cent engine load she achieved 19 knots, while at 50 per cent load we were still clocking 16.5 knots,” Jim said. 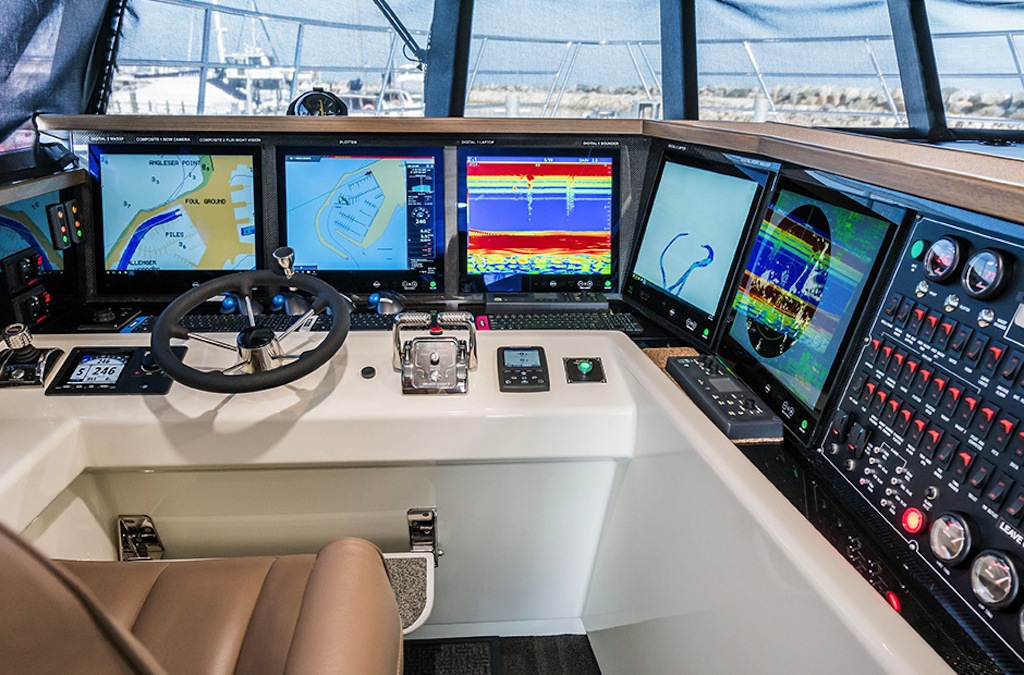 Furuno electronics are fitted in the wheelhouse. The FCV-1900 sonar is matched with a 3kW transducer giving a 1,500-metre depth reading capability, plus a 2kW unit for shallow water.

Another 19-inch monitor carries Furuno’s WAASP multi-beam sonar with 3D floor mapping features. Mitch Croft from Geraldton Marine Electronics said slave monitors have been installed on the flybridge, plus CCTV security to monitor crew whereabouts and safety on the vessel. 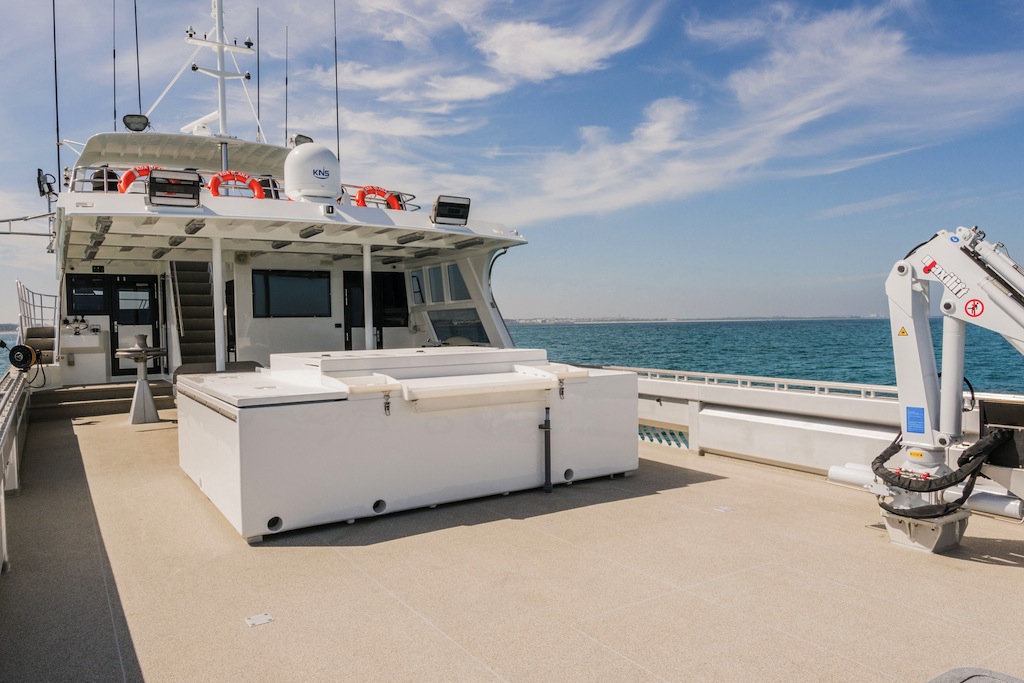 The gunwales are fitted with electric snapper winch and hydraulic dropline gear points plus the huge rear deck accommodates a large console incorporating tackle making and cleaning benches along with ice storage.

A separate unit stores the catch, which as skipper Jonah boasts, is humanely killed using the Iki-Jime method, bled, and placed in an ice slurry within one minute of coming onboard. 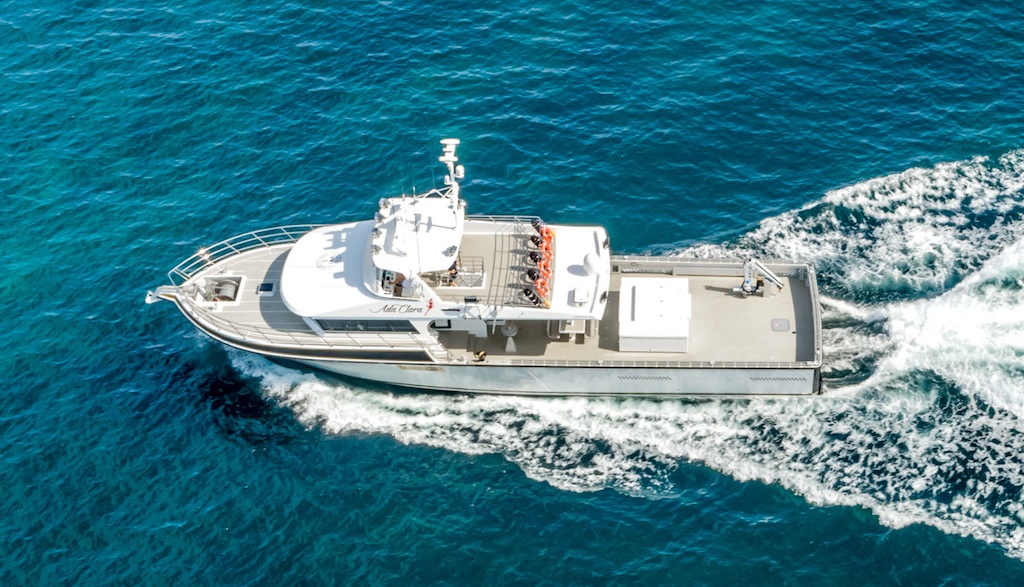 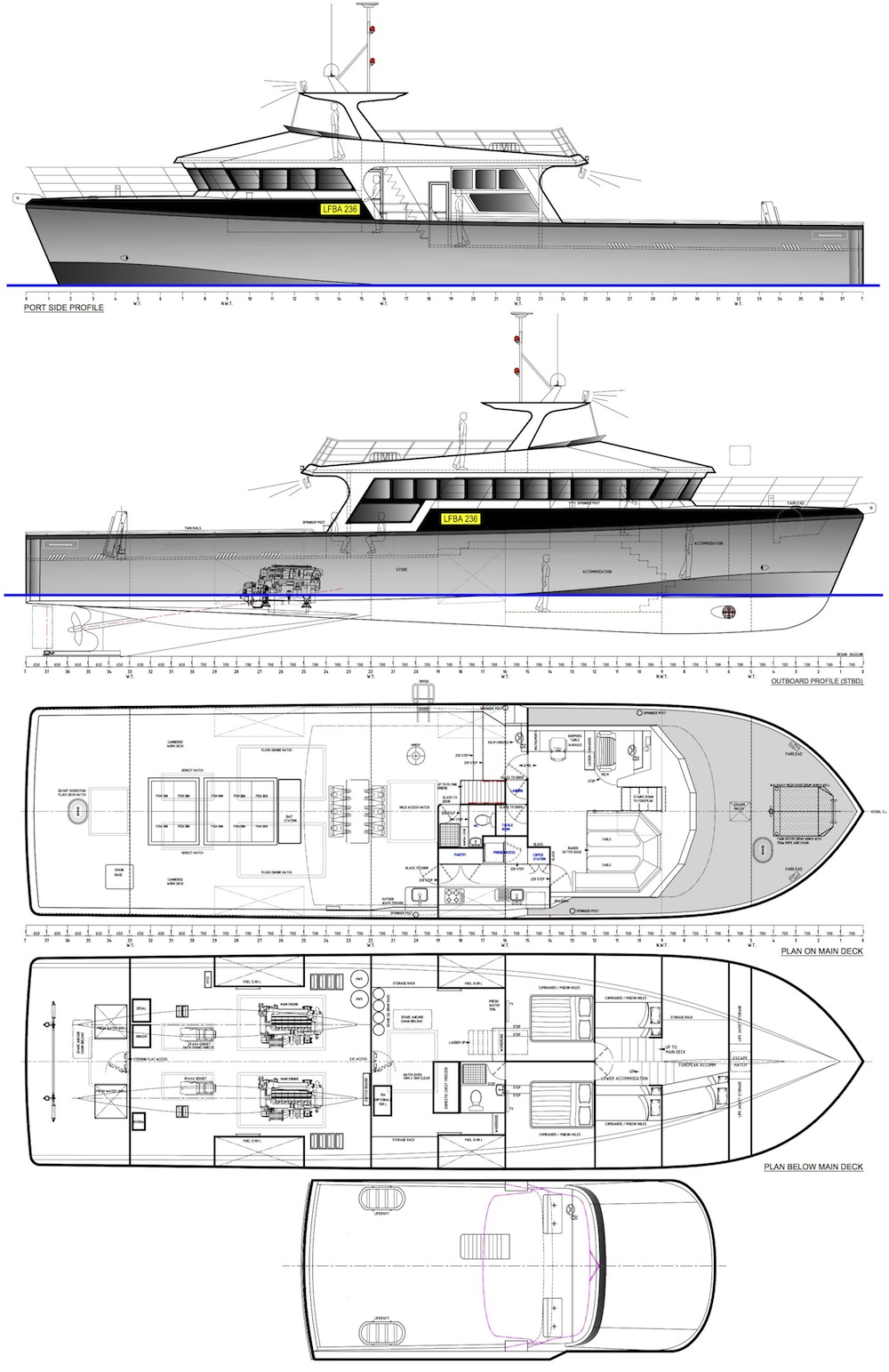