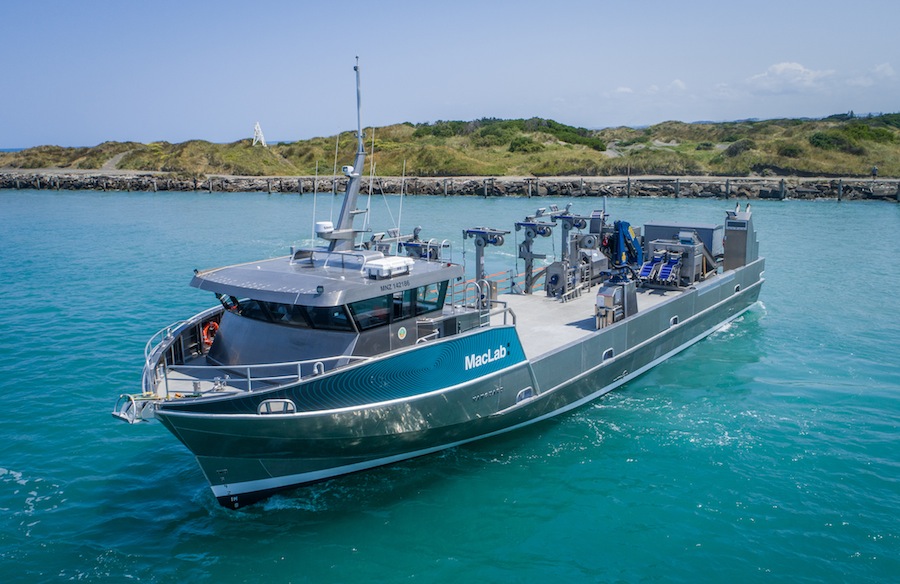 Q-West has built many boats of many types, but Vanguard is the first mussel harvester to be launched from its yard at Castlecliff, Whanganui. Constructed over 12 months, the 30-metre aluminium vessel incorporates several features new to the mussel industry.

In 2018, Scott Gillander of New-Zealand-based company MacLab met with designers and builders to discuss a potential new vessel for its mussel farming operations. The new vessel would be loosely based on the design of previous harvesters, but Scott and his team had requirements that took the new vessel into a new, evolutionary phase.

MacLab does not sell mussels for human consumption, but instead harvests New Zealand green lipped mussels and extracts the bioactives for use in health products.

The vessel was to carry 80+ tonnes of product and equipment, had to be robust and as efficient as possible, and to provide good comfort for the crew.

MacLabs has acquired large new farming areas in Golden Bay, which is open to the ocean swells coming in from the Tasman Sea, and this has caused problems in the past. The company wanted to expand its fleet to reduce its reliance on chartered harvesters.

Mussel farms have what they call “backbones”, which are like ropes that run horizontal to the water surface in a tub of water and that might run for a kilometre or more. And then they have ropes that are tied to this backbone that drop vertically down into the water.

A farm has rows of these lines, approximately five to eight metres apart. They might have 10 or 20 of these backbones, and then off them they have a “dropper” that runs down maybe five or six metres and on that dropper is where they grow the mussels.

Those backbones are tied with anchors to the ocean floor. The ropes have buoys on them that are threaded through, which hold the line up and hold the weight of the mussels. Harvesters have davits that hang over the edge, and the davits lift the backbone and the boat “walks” along it. As it comes to a dropper, it lifts the line and puts it through a machine that strips all the mussels off.

The harvesters built to work in the Marlborough Sounds need to be shallow to access the shallow waters of Havelock, so the vessels tend to be beamy and shallow, which suits the sheltered water of the sounds. But these vessels when light are prone to rolling and pitching in the rough sea conditions experienced in open water, making work on deck tiring and sometimes dangerous.

It has been found that after loading twenty or so bags of product the motions of the vessel slow down and working conditions on deck improve, therefore, Scott asked about the possibility of water ballast tanks. Designer Oceantech had discussed the idea in the past, and was keen to incorporate them into this vessel.

The ballast tanks are based on the mass moment of inertia theory. To be the most effective, the required ballast (24 tonnes) was to be located as far as possible from the axis of rotation (the vessel’s centreline). The fact that MacLabs wanted a vessel of 8.5 metres beam made this even more effective. As the vessel is loaded up with mussel bags, the crew starts pumping water off to maintain the balance.

Another attribute of the ballast tanks is the extra longitudinal strength they provide. The ballast tanks caused some interesting construction and plumbing challenges, which were solved, and the system has turned out to be very effective.

“It’s an effort to provide a better platform,” commented Colin Mitchell, CEO of builder Q-West. “If you look back some of them have tried building catamaran mussel harvesters. There’s a few now that some of them are building that have a central well where all the bags get put down into. They’re always developing or innovating and trying to make the boats more stable in the water when they’re working on them. And this was just one way of doing that.”

In the past, many harvesting operations would load the boat all day, stacking the bags on top of each other, which sometimes resulted in the product being crushed. The way Vanguard was designed, it can take eighty-five tonnes on one level, and then the crew will steam those mussels back to unload at Nelson and go out again.

From the dock, MacLab takes the product to its factory where the process is to put them though other machines to sort them. As the active compounds can be degraded by heat or exposure to air (among other things), MacLab’s processes are highly engineered to prevent degradation occurring, thus maintaining the bioactive properties of the product.

A Scania DI13 071M auxiliary engine rated at 285 kilowatts powers the hydraulic and water pumps, and an Isuzu 70kVA genset supplies all the electricity requirements. 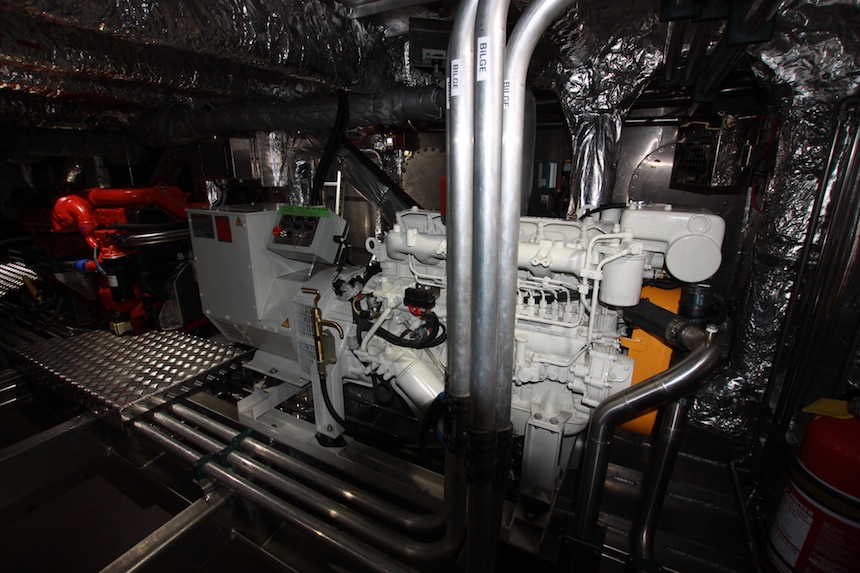 The fitting of a colour grader on deck necessitated the fitting of two large air compressors and air tanks below, but room was found for these and all the water ballast plumbing without over-crowding.

Once aboard, all the muscles get sorted because you get a mixture of blue and green mussels and the blue mussels have no value. The mussels all drop in front of the lasers in the colour grader and compressed air sifts the blue ones out of the way, sending them over the side while the green ones then go into bags and get stored on the boat.

“The boats might be simple looking on the outside, but below decks you have the hydraulics, compressor units, the water pumps etc.,” Said Q-West CEO Colin Mitchell. “So that was a real challenge for us to get our head around, especially when costing it and deciding what we needed to do in terms of building. It’s something we’ve never done before.”

Mitchell said Q-West also worked hard to make the boat easy to service and maintain, with additional systems and materials to minimise corrosion and maintenance, and an emphasis on easy accessibility in the engine room.

“The builders at Q-West and the engineers from Fluid Power hydraulics did a great job of economically fitting all the machinery and connecting pipe work while still providing easy access everywhere,” added Oceantech’s Jon Kemp.

The general layout of the vessel is similar to recent harvesters, with accommodation forward, followed by the tank room, engine room then lazarette. The harvesting machinery is aft on deck, with a lowered section of the deck keeping the pick-up and declumper closer to the water. Because the vessel will be used for a wide variety of work, it has been fitted with five davits instead of the usual four. 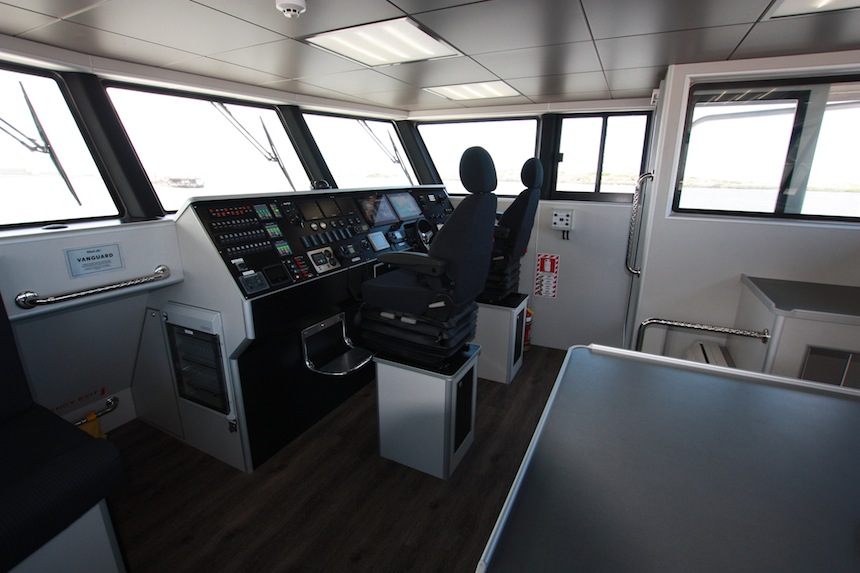 The bridge and accommodation are air conditioned and feature KAB seating. Accommodation is provided for six crew with a complete galley down below.

Vanguard left Whanganui fully operational and was hauling mussel lines within days of arriving at Port Nelson. On its third full day it went out, it did an 80-tonne harvest in Golden Bay and delivered it to Nelson. 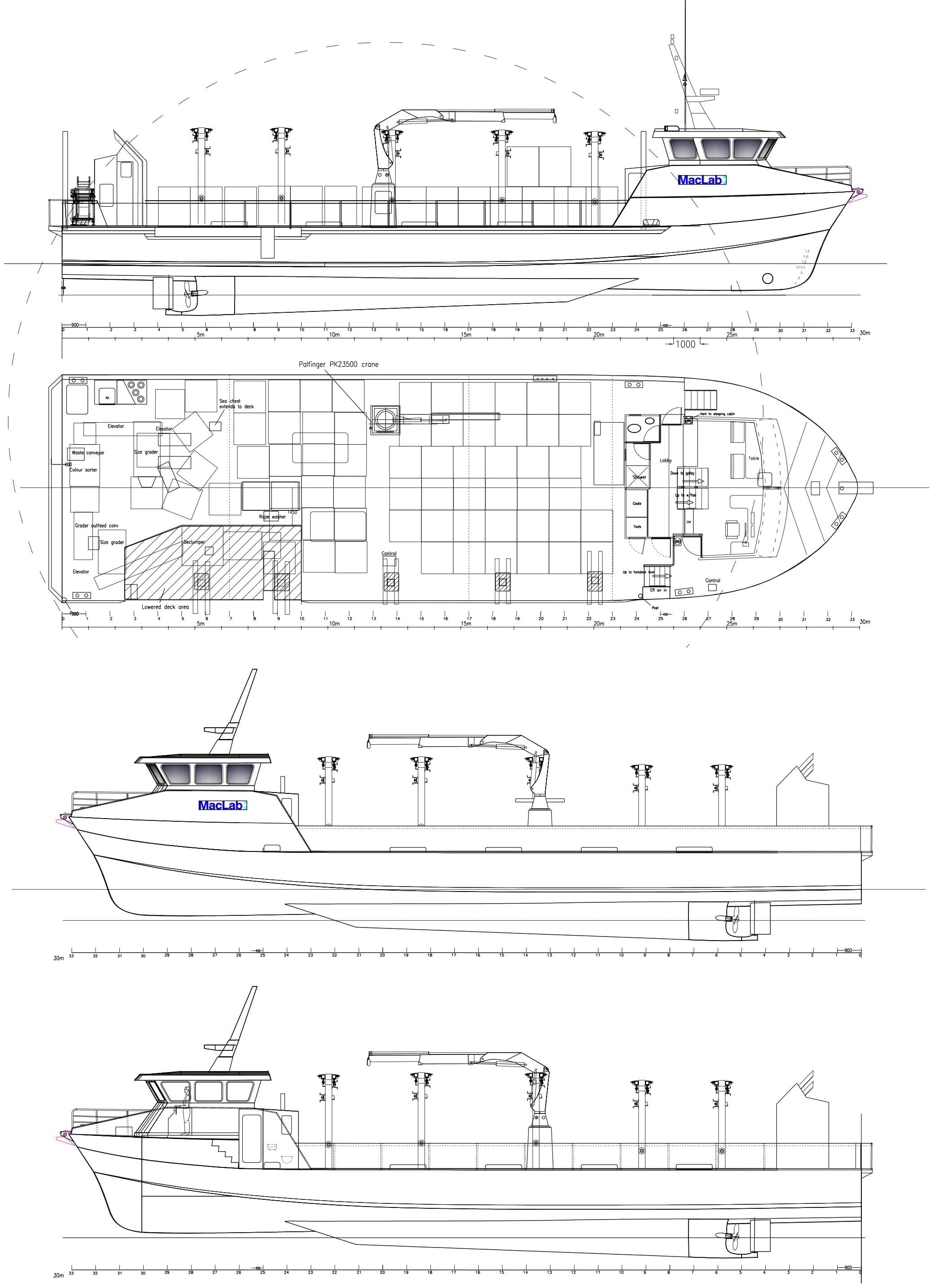