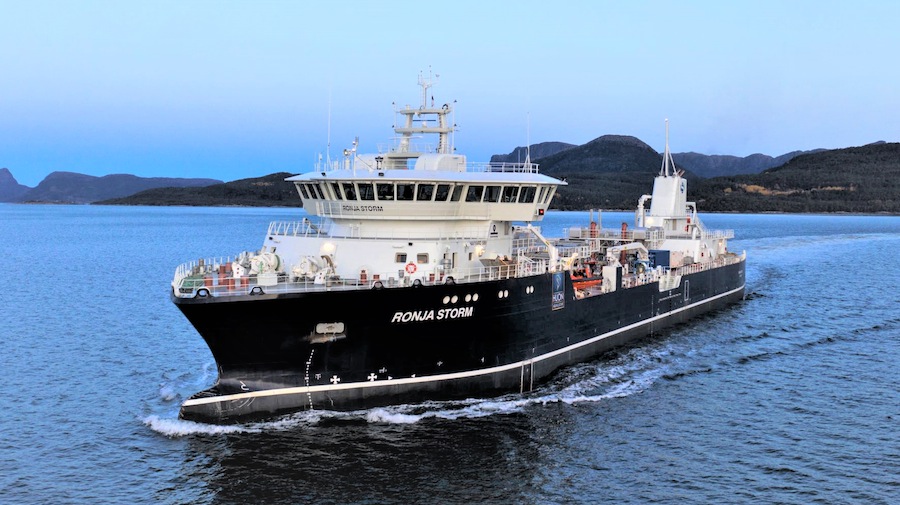 Ronja Storm, the world’s biggest wellboat, has now begun a 10-year contract in Tasmania, Australia after having undergone biosecurity and customs checks, including ballast water checks, following its delivery from Norway.

As with any new vessel entering Australian waters, the Australian Marine Safety Authority conducted an initial inspection upon arrival, organised by DNV-GL, which was responsible for undertaking the survey.

Ronja Storm has the capability to create freshwater from seawater via reverse osmosis through an on-water desalination plant that can produce 16.8 million litres of freshwater per day.

The desalinated water can be used up to 12 times before being treated and returned to the sea, though operator Huon Aquaculture’s processes include an inspection of water quality after four uses.

Of each intake of seawater, 50 per cent is turned into freshwater for bathing and the other 50 per cent is cleaned (following filtration) and released back into the ocean with the additional salt and mineral content from the treated seawater.

This water produced by reverse osmosis (RO) is of a higher quality than water from a freshwater river, meaning a greater density of fish is able to be treated at any given time. All water used in the RO process is filtered in a three-stage process down to a particle size of five microns. The seawater is always returned to the same lease from which it was taken.

The freshwater will be used in the “salmon hospital”. Fish are taken out of the pens and swim around in freshwater in order to fight the amoebaean gill disease AGD. In Tasmania, this happens roughly once a month. With Ronja Storm’s gigantic freshwater facilities and the enormous tanks, fish can be put in a 240-metre pen while being treated simultaneously, reducing stress among the fish and thus ensuring higher quality and improved fish growth.

The large production of freshwater, in addition to cleansing facilities that provides for reuse of water several times over, ensure that the vessel can continuously carry out work at sea, without having to head ashore to refill water as frequently as other vessels have to.

Salmon are loaded into freshwater tanks where the fish swim around for three hours, while they can also be transported to a new pen.

“The salmon must be treated and transported many times throughout their life cycle and bathing the fish in freshwater is an effective and environmentally friendly method,” commented Kjetil Myren from the Norwegian builder Havyard.

“Producing our own freshwater makes the treatment more sustainable, as you avoid using natural freshwater, which is a scarce resource, you save time and fuel from not having to fetch it, and you don’t have to filter it. The water is of course reused as well.”

Ronja Storm is fitted with a power system that utilises multiple variable speed generators that adjust the number of units in operation as well as engine speed, to meet required power demand. This is achieved by generating power at 690VAC with variable frequency and converting it to DC inside the main switchboard, and transmitting it through the ship using 1,000VDC and 700VDC grids.

Electrical power is then converted back to the required AC voltage by frequency converters, which control electric motor speed. As a result, the system achieves a significant reduction in fuel consumption, and noise and exhaust emissions.

There is an emphasis on stability and reduced noise levels on-board. The power generation and propulsion system is designed to operate at a maximum sound pressure of 35 decibels which is a reduction of 90 per cent when compared to Ronja Huon’s designed noise pressure of 45dB.